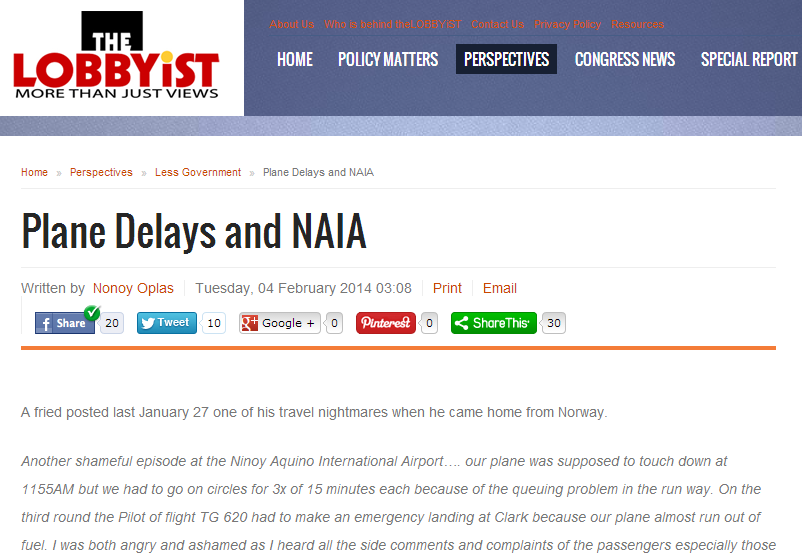 A fried posted last January 27 one of his travel nightmares when he came home from Norway.

Another shameful episode at the Ninoy Aquino International Airport…. our plane was supposed to touch down at 1155AM but we had to go on circles for 3x of 15 minutes each because of the queuing problem in the run way. On the third round the Pilot of flight TG 620 had to make an emergency landing at Clark because our plane almost run out of fuel. I was both angry and ashamed as I heard all the side comments and complaints of the passengers especially those foreigners who just came for a business meeting today but had to miss out. We touched down around 3:00PM after yet another prolonged wait at the Diosdado Macapagal International Airport (Clark) because it took them more than half an hour to give us the go signal to take off after refueling!

If we have only one runway that is functional how can we accommodate all those planes that come to our airport. How can we attract Tourists and Investors to come if this is the kind of infrastructure we have to offer. Why can't we just give up the Ninoy Aquino International Airport and build a more respectable and world class airport in Clark Field! The area has enough space for several runways….

Amen. I can only commiserate. So far I have not experienced a nightmare like that.

Airlines want to economize fuel cost as much as possible so they can bring down their fares. If an airplane is made to wait for 10 minutes or more in the air, that should be several thousands of pesos of wasted fuel with no additional revenue. But the airline cannot bill the government through NAIA for such additional costs. Govt can only charge lots of taxes and fees on airlines but will not share with additional costs due to govt inefficiency or stupidity.

These days, each airline has to consider 4 factors in their pricing. (a) fare by competitor airlines on same routes, (b) domestic passengers taking the bus and RORO instead, for those going to Bicol, Samar, Leyte, Aklan, Capiz, Antique, Iloilo; (c) taking the boat direct from Manila pier to many provinces in Visayas-Mindanao, or (d) postpone the trip and not fly if the fares are high. So airlines must economize on many things especially fuel to give low fares as possible and attract more passengers. Like low fares to passengers who have no check in baggage. Lighter plane load, fewer fuel consumption. If they check in baggages, extra fee for 10 kg bag, 15 kg bag, 20 kg bag, etc.

Here comes government, occasionally causing wasteful use of fuel by airlines and not assuming responsibility for its inefficiency. Government could have mitigate the additional costs by allowing deductions in landing fee, take off fee, etc. for each minute delaying the landing of an airplane. But govt does not think that way, kabig lang ng kabig, shameless collection of endless taxes and fees.

Another thing. The queuing of airplanes and allowing faster landing and taking off can be done with more modern technology. In HK, I noticed that one runway can accommodate one landing every 30-40 seconds on average, then on the other runway, planes take off every 30-40 seconds too. At NAIA, I notice that queuing is every 45 seconds or more for each landing, another 45 seconds or more for each take off. Maybe there are suppliers of new air navigation technology, but they can’t sell unless they give bribe to NAIA bureaucrats?

Government taxes and fees in the airline sector, passed on to the passengers: Aviation security fee + Excise tax and VAT on fuel products and fuel surcharge + VAT on overall plane ticket. There are also implied taxes in the plane fare like common carriers tax (CCT), gross Philippine billing tax (GPBT), or a franchise tax, on top of corporate income tax, etc. Then there are landing fee, take off fee, baggage handling fee, etc. Airlines pass all of these to passengers.

Plus: travel tax for international passengers (essentially a hold up, highway robbery as there is zero service given to passengers), airport terminal fee (and the airport does not even give free drinking water/fountain, passengers have to pay extra to buy bottled water).

Some big airports abroad also divert plane landings but only during emergencies, like very bad weather, or some risks in landing like one airplane has nearly crash landed and left debris on the runway. But not for reason of "Sorry guys, 12 planes on queue ahead of you, you are #13, so feel free to waste fuel for several minutes, or land at the next non-busy airport."
-----------

This is of course not a surprise. The civil aviation authority has been dysfunctional for years. The Philippines is still one of only a handful of nations on the US and EU blacklist, after years and years and years. We are very, very, very slowly getting off of it but look how long it took. Remember too when NAIA shut down because they ALL the navigation equipment had failed. When the first ones failed they didn't get around to fixing it until the last one failed, and then they had to scramble and fly in parts from overseas. Then there is the cheating of tourists through double-fared airport licensed taxis and extremely high at-airport prices (many other countries forbid higher prices at airport). There are the lousy facilities. etc. etc. etc.

It is time to (a) break up the authority like many other countries do. Right now this single agency is trying to do too many things. They run airports. Regulate airlines. And supervise air traffic. The last two should be split and the airports should be handle either by private agencies or by local governments as is done in the U.S. and the U.K. The San Francisco airport is not owned by the Federal Government nor is London's Heathrow run by the UK Government.

Your poster does make one logical error. There is no either-or choice here. We do not have to choose Clark or NAIA. Rather like NYC, Tokyo, Bangkok, London, Chicago, Paris, the San Francisco Bay Area, Los Angeles, etc. we can have two and we can have them run separately a la the London Airports providing competition and thereby improving services and driving down costs.

Mega Manila is larger than most countries in the world, let alone most metro areas. By one measure, it is the 5th most populous in the world. The Philippines too is a very large country. Both our own experience and other countries' experiences show that having a single, large, centralized bureaucracy controlling -- and earning money off of both above and under the table -- our entire complicate and growing and vita air industry is a flawed concept. It is time to learn from our own history and those of others and create a more logical, flexible, responsive and accountable system. Years and years and years on an international blacklist is enough.