A friend posted today in his fb wall,

DOE Ssec. Petilla reportedly told the supreme court that the implementation of the Epira law is a learning process. Fine, if that is how this govt wants it. However, we, the consumers, do not have to pay for your lessons.

I commented that the main problem is the lack of power generation, lack of power plants, and not on power distribution or transmission. If you have only 200+ MW of excess reserves, and one 300 MW power plant will suddenly conk out (especially if it is 20+ years old), brown out is the logical thing to happen.

Someone suggested that the problem is the off take provision in the IPP contracts. Government guaranteed a certain volume of power to be purchased from IPPs whether it is needed or not, and the cost of unneeded power is passed on to consumers 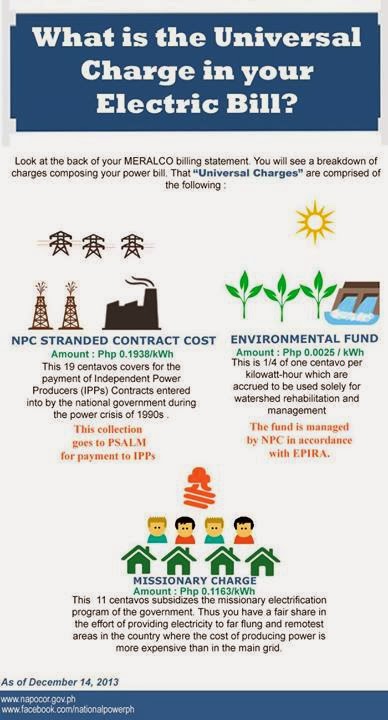 That was correct… many years ago. The cost of that provision is now in the NPC stranded contract cost, passed on to us electricity consumers at P0.19/kwh, reflected in the universal charges. See illustration from NPC, right.

The bulk of our monthly electricity bill, more than half of total, is from generation charges by the power plants. For instance, for the December 2013 bill, in P/kwh:

The "off take provision" that was earlier mentioned refers to NPC stranded contract cost, being passed to us at P0.19/kwh.

Repeat that: the main problem is in power generation, not in power distribution or transmission.

A good observation from Mr. RDC:

I think the point that the Secretary of Energy was trying to make was that no law, not even the EPIRA, was able to foresee all situations and contingencies. A lot of the problems in the electric power industry now are a result of inadequate safeguards against forces that are outside anybody's control--politics having a lot to do with it which affects the economy and thus everything else.

True. No laws and regulations, past and present, can really foresee the future. All new regulations and restrictions are reactions to past and current problems and issues. By the time these issues were “addressed”, new issues would come out and the new regulations will not be able to capture or anticipate them.

Re power brown outs, here again is a chart from the DOE. Check projections for April-May 2014, or 2-3 months from now, the power reserves will be very thin, maybe only 100 MW. If the horizontal line, total power supply, will not go down, say a 100 or 200 or 300 MW power plant will suddenly conk out, then we will have no brown out this coming April-May. Knock on wood. 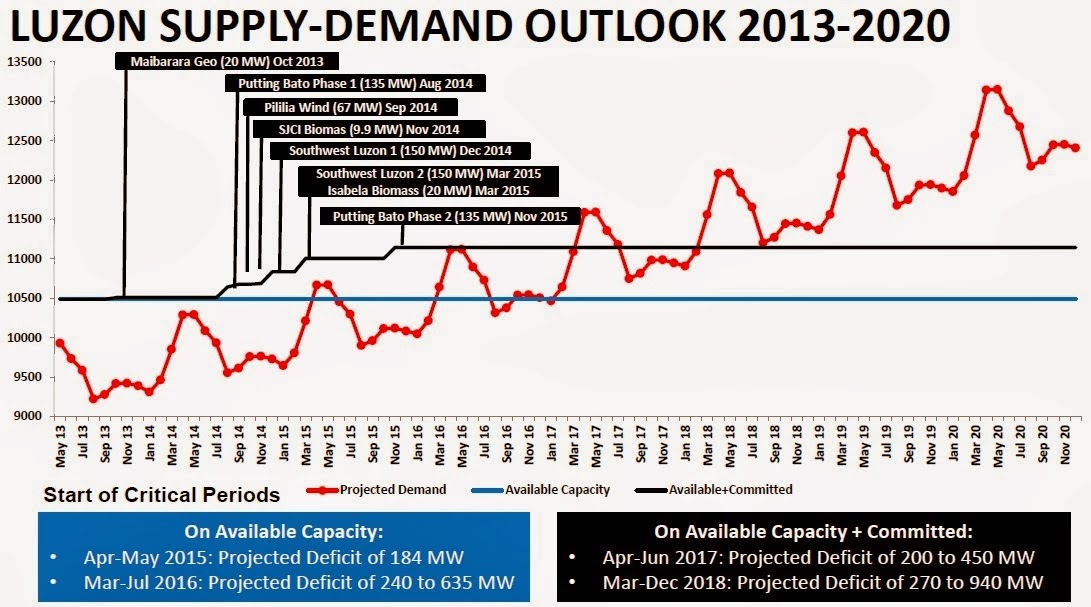 Mr. RDC added, “To put power supply in perspective, demand for power increases every year and yet there has been only one power plant that saw the light of day from the time it was put on the drawing board during the time of EPIRA (at least, in Luzon)--that of GN Power in Bataan. A lot of the plants that came on stream during the EPIRA implementation were conceived and were commenced prior to EPIRA. The commissioning for the next new plant will be next year, if I'm not mistaken."

My friend suggested further that being an electricity , he should not pay for anybody sleeping on or learning their job. I suggested that the government – the DOE, EMB/DENR, BIR/DOF, LGUs, etc. -- are NOT sleeping on their job. They are wide awake. Someone wants to put up a new power plant, they are all awake to impose and enforce various regulations, restrictions, permits, taxes, fees, royalties, until very few, GN Power included, has the stomach and financial resources to pay for all those bureaucracies. Meanwhile, here's a new development on the sector. From interaksyon, posted last night.


MANILA - A day after an agency in-charge of Malaya Thermal Power Plant (MTPP)drew flak for not running it in November, the Department of Energy has formally designated the facility as a 'must-run' unit (MRU) for the electricity spot market.