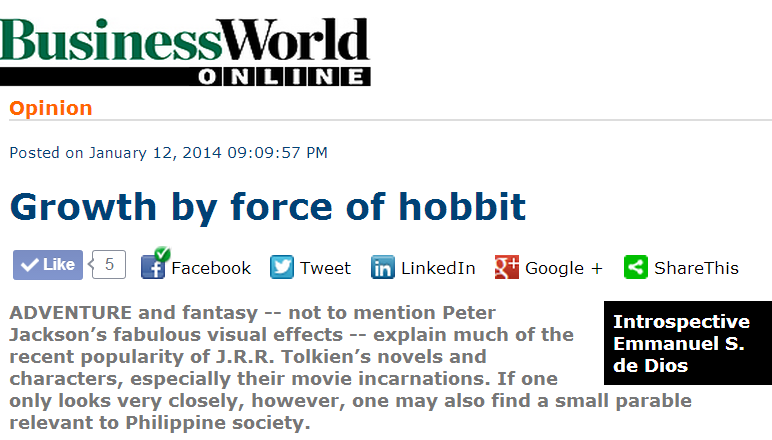 Adventure and fantasy -- not to mention Peter Jackson’s fabulous visual effects -- explain much of the recent popularity of J.R.R. Tolkien’s novels and characters, especially their movie incarnations. If one only looks very closely, however, one may also find a small parable relevant to Philippine society.

Tolkien’s Middle Earth is threatened by occult superpowers that seek total domination through their mobilization of brainwashed masses. Little resistance is offered, however, for lack of social cohesion. Human warrior-kings have been corrupted by petty divisions and their narrow ambitions that blind them to an imminent common threat. Dwarves, on the other hand, devote their lives to compulsive wealth-seeking in underground mines. Meanwhile the seraphic, almost-divine elves are only half-committed to this world and already have their eyes trained on the next.

In the end, however, Good still triumphs over Evil and Middle Earth is saved because the One Ring of Power is entrusted to the most unassuming and unambitious of creatures -- hobbits who have neither the desire nor the use for it. (Game theorists will be pleased to note the implied role of credible commitment.) Special meaning attaches to the nature of the hobbits themselves, who are moved neither by dreams of power, fame, exorbitant wealth, nor heavenly reward. Their concerns focus instead on the mundane: orderliness, security, peace, the freedom to attend to one’s own business and to secure one’s own (pipe-smoking) comfort. Embodying Adam Smith’s virtues of prudence, justice, and benevolence, the hobbits (in short) stand for civilisation and the bourgeoisie -- the middle class of Middle Earth.

In what sense can this be a parable for today? Like Middle Earth, if Philippine society is to progress, it too must ultimately hand over power to its middle class. Or more precisely, it must aim to reach the point where the majority of its people become middle class and are sufficiently numerous to set the tone of both polity and economy. (This insight is nothing new, by the way: the work by Easterly and Acemoglu, among others, shows the close causal association between the size of the middle class and economic growth.)

The strength and size of the middle class matters because it is the natural constituency for many of the factors known to make for economic growth and development. The most obvious fact is economic: a large middle class constitutes a diverse market that acts as a magnet for both domestic and foreign investment. It allows the domestic economy to escape the tyranny of Engel’s Law and produce diverse and higher value-added goods and services beyond food staples.

Beyond the purely economic, however, a large middle class changes the tenor of the country’s institutions. Take good governance and the rule of law as an example. The rich and the powerful can typically buy or shoot their way out of complying with the law, while the poor are frequently excused from obeying it (under the dictum that “those who have less in life should have more in the law”). The middle classes alone must contend with the “full farce” of justice and the law. It is in their interest to see the law genuinely upheld and impartially applied. Bad police protection is something the rich will scarcely notice, since they can easily afford private protection (indeed the truly powerful will have their private armies). The poor, on the other hand, having little or no property, represent far less of a target; the deficiency therefore also matters less for them. By contrast, the middle class, being a significant enough target but lacking ample means for self-provision, has the greatest interest in an effective and impartial police force.

The same argument can be applied to almost all other aspects of governance -- the courts, tax enforcement, prudent and honest government spending, an independent and professional bureaucracy, civil liberties, and political stability -- all with same result. It will invariably be found that the middle class has the greatest stake in society’s attaining these aspects of good governance. Which also explains their vociferous (if less than massive) advocacy of these social causes. By contrast, the rich and powerful are either able to manipulate results, or in the worst case, will have other options open. As for the poor, since their conditions are already as desperate as they can get, they well may be indifferent. (This same condition makes the poor vulnerable to being instrumentalized by the powerful through demagoguery and patronage: think Sauron and the orcs -- or maybe Makati.)

The weak state of formal Philippine political institutions is the most formidable obstacle to the country’s development, and it is directly traceable to the small size and weakness of its middle class. Measured by the share of population that is able to spend $5-$20 per person daily, the Philippine middle class today constitutes barely 17% of the population; it is as high as 57% for Malaysia, 47% for Thailand, and 27% for China. Growth of some 6-7% annually is needed over several decades for the size of the middle class to approach that of Malaysia.

The Catch-22 Proposition, therefore, is the following: we know that growth and development are likely to be self-sustaining when founded on social cohesion based on a broad middle class. But the size of the middle class itself depends on whether growth occurs and how inclusive it is. The political and economic challenge in the coming decades, therefore, is how to sustain growth and social cohesion sufficiently in the interim -- notwithstanding the small size and political weakness of the middle class -- so that its share is gradually enlarged and society and the economy are placed on a more stable footing.

Equilibrium theory tells us that when A and B mutually determine each other, something exogenous is needed to change their position. What are those exogenous factors in the growth-social cohesion equilibrium? Gradual but inexorable improvements in education among the population? Fortunate conjunctures in export demand and foreign direct investment? Episodic bouts of honest leadership and good governance? Vigorous local initiatives notwithstanding national gridlock? Inordinate civic consciousness and social responsibility among the middle classes and the far-sighted rich? That relief can come from many quarters is comforting; but that they are all contingent and incremental should be a source of deep concern and a warning that hard work is needed. Beyond “poverty alleviation,” which after all is a negative goal, government must instead build society. But this can occur only if we are willing to leave the age of dark powers and orcs and instead begin the era of hobbits and men.