This is my article in TV5's news portal last December 31,
http://www.interaksyon.com/business/51641/fat-free-economics--philippine-economic-prospects-viewed-against-global-growth-scene
----------- 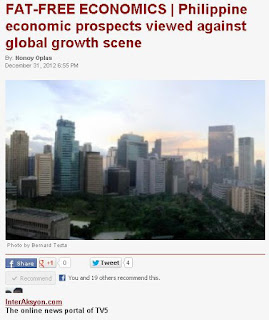 Diversity and spontaneity are important characteristics of the human mind if unhindered in pursuing individual talent and creativity. The more restrictions and limitations imposed on people, the less creative and innovative they can be.

This is the case of many developed economies as welfare populism has tied their entrepreneurial creativity and public finance, resulting in slow growth, and even economic contraction in some European economies like the so-called PIGS – Portugal, Italy, Greece and Spain.

With modern technology, political restrictions and bureaucratic bottlenecks are somehow circumvented, allowing politically suppressed economies to grow fast. This is the case of the BRIC economies (Brazil, Russia, India and China) and to a certain extent, Indonesia.

Below is a quick rundown of GDP size and growth of the major global economies. We used the purchasing power parity (PPP) valuation of GDP as it reduces or eliminates hyper valuation of goods and services in many developed economies and put their values at par with those in developing economies.

There are some interesting facts in the table.

One, three Asian countries make it to the top four largest economies in the world.

Two, if growth rates over the past six years, 2006-2011, are maintained, China’s GDP will likely overtake that of the US in about five years or so, at least in PPP valuation.

Four, at current growth rates, South Korea will land in the top 10 largest economies in less than five years, over-taking Mexico and Italy.

Five, Taiwan’s economy will touch the one trillion dollar mark in about three years if similar growth is sustained, joining the five other Asian economies including Indonesia.

Six, if the Philippines will maintain a 5 percent average growth rate over the next few years, its GDP size will reach the half-trillion dollar mark in about four years or by 2016. 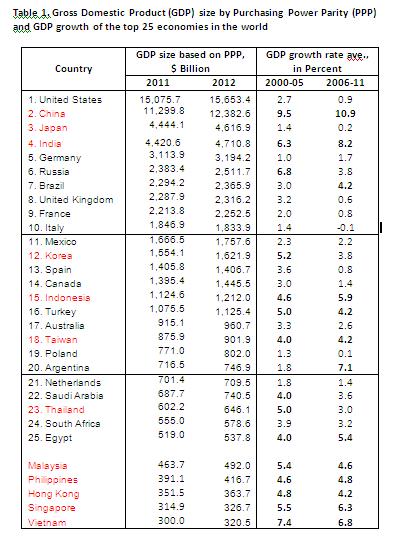 There are several positive things going for the Philippines to grow five percent or higher, including the following:

The BPO industry at nearly $11 billion in 2011 and projected to reach $25 billion in 2016. So far this is the most dynamic sector as labor rigidities in the developed economies are not expected to be relaxed soon.

While things can be gloomy in other economies in the world, it is more optimistic in many emerging economies like the Philippines. Governments do not have to “bend backwards” and offer various fiscal incentives. They just need to promulgate the rule of law, to guarantee that contracts are respected, honored and enforced, and violators are punished accordingly.

The stability of contracts and predictability of policies, plus keeping away from the welfare populism and politics of envy that has trapped many developed countries, are important ingredients for stable and sustainable growth.

Human imagination and innovation is without limit. It is an endless, unfathomable resource.  This ensures that economic and social growth can be sustained, especially now that we have seen the social trappings of welfare populism, labor and government rigidities.