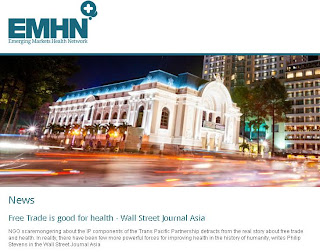 Our new global health network, Emerging Markets Health Network (EMHN) has a new website, http://www.emhn.org/. We are composed of independent and private think tanks in emerging Asian countries that believe in greater role for market competition in the provision of healthcare for the people, rich and poor alike.

Last month, EMHN Executive Director and a good friend, Philip Stevens, wrote an article published in WSJ Asia. Philip argued that free trade -- freedom to trade by producers from different countries and freedom to choose by consumers from different countries -- is consistent with protecting public health especially in encouraging the emergence of more powerful, more disease-killer new medicines. The opposition by Oxfam and other left-leaning NGOs to data exclusivity purportedly to protect public health is not valid, Philip argued.

Free Trade Is Good for Health

The TPP can improve access to food and medicine. But Oxfam won't tell you that.

Last week, trade negotiators for the Trans Pacific Partnership (TPP) sat down in Auckland to hammer out a deal. This new multilateral trade agreement between the U.S. and ten Asian and Latin American countries could be the largest of its kind since the collapse of World Trade Organization talks in Geneva in 2008, so it's perhaps not surprising that it's coming under a barrage of left-liberal criticism. Oxfam and others now claim the TPP is bad for health.

These development NGOs argue the free-trade pact will impose onerous new forms of intellectual-property protection on essential medicines that go beyond those agreed by the WTO's Trade Related Aspects of Intellectual Property (TRIPS) 1995 agreement. And that this will make it difficult for the world's poor to access cheap drugs. But this is a misperception NGOs are amplifying, ignoring altogether the positive story about free trade and health.

First off, Oxfam's claim that the TPP will reduce access to essential medicines for poorer TPP countries like Vietnam or Peru is factually untrue. The U.S. government has stated that the TPP will respect flexibilities in the TRIPS agreement agreed in Doha in 2001 that allow developing nations to override pharmaceutical IP rights in a number of circumstances, including health emergencies.

Next, the vast majority of drugs on the World Health Organization's list of essential medicines to treat the most common infectious diseases are off-patent. So IP rules are simply irrelevant to drugs for many conditions prevalent in the poorest countries.

The same is true for common medicines used to treat the most prevalent non-communicable diseases faced by slightly wealthier TPP countries such as Malaysia. So many medicines for diabetes, hypertension and asthma are completely outside the scope of any free-trade agreement.

Still, NGOs raise the specter that the TPP will sidestep traditional patent rules by imposing punitive new periods of "data exclusivity" for essential medicines. Data exclusivity is a form of intellectual property that allows manufacturers of new drugs to retain the right to valuable data generated during clinical trials. The idea is to prevent generic manufacturers from using it to make copies until a fixed period elapses—typically five years in most countries.

Data exclusivity is rapidly surpassing patents as the most important form of intellectual property for medicines, as the 20-year term of a standard patent is increasingly eaten up by lengthy testing and regulatory requirements that drive up R&D costs. After jumping though these hurdles, an innovative medicine typically has around only seven years patent life to recoup costs and make a profit.

Absent radical reform of the drug approval system—which is unlikely to happen any time soon—data exclusivity is then the best assurance innovators have that their investments will reap a return. Otherwise, launching a new drug could become so expensive that patients may not have access to new medicines. That's why such considerations are now included in modern trade deals.

Despite what Oxfam thinks however, the chances that the TPP will lengthen the exclusivity period are very low. The five years of exclusivity for new standard chemical drugs is enshrined in U.S. law, so Washington cannot ask for more in trade negotiations.

Five years is also the standard to which other TPP countries like Vietnam and Malaysia subscribe, so it isn't clear they'll push for more. In any case, the TPP will probably only apply data exclusivity to new drugs, meaning that existing drugs remain unaffected.

Yet in the end, intellectual property and the NGO community's fulminations against it are a sideshow in the wider story about trade and health. These activists and their intellectual backers like to view free trade as somewhere between an agent of imperialist economic repression and a sinister vehicle for America's fast food industry, but the reality is that there have been few more powerful forces for improving health in the history of humanity.

Prior to the 1950s, the majority of the world's population lived a precarious life as subsistence farmers. Since then, the opening of global markets, first by the General Agreement on Tariffs and Trade and then by the WTO, has transformed the health prospects of millions by raising incomes. That, and not IP flexibility, made decent food, sanitation, and new medical technologies available.

That's how the Asian countries involved in the TPP—Malaysia, Singapore, Brunei and Vietnam—have witnessed startling improvements in the health prospects of their citizens since the middle of the last century. Singapore signed GATT in 1973, and by 1993 there were no import duties for any product except alcohol, tobacco and automobiles, a situation that largely persists today. Singapore now surpasses many European countries for life expectancy, with Malaysia not far behind.

Each of these countries has reaped enormous welfare dividends by opening their borders to free trade. With poorer countries such as Vietnam now joining the party, millions could benefit from the TPP—provided they are not put off by scaremongering NGOs.
Mr. Stevens is executive director of the Emerging Markets Health Network at the Institute of Democracy and Economic Affairs (IDEAS), Malaysia.