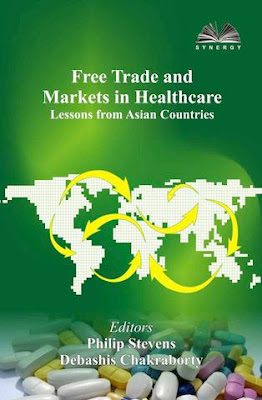 It was formally launched last week, January 11 at the Indian Institute of Foreign Trade in Calcutta. Among the major arguments of the book are:

* Free trade is a powerful agent of improved health, via higher incomes and ‘knowledge spillovers’

* Intellectual property provisions within international trade regimes have little bearing on access to medicines by the poor, and recent attempts by government to expropriate the property rights of foreign pharmaceutical companies are motivated more by industrial policy than concern for patients

* New technology rather than new regulation is the most sensible answer to stemming the global trade in fake and spurious medicines.

A longer discussion about the book is found here.

Details of the launch are found here. Photos below lifted from that link. Upper photo includes the two editors, Debashis Chakraborty (left most) and Philip Stevens (right most). 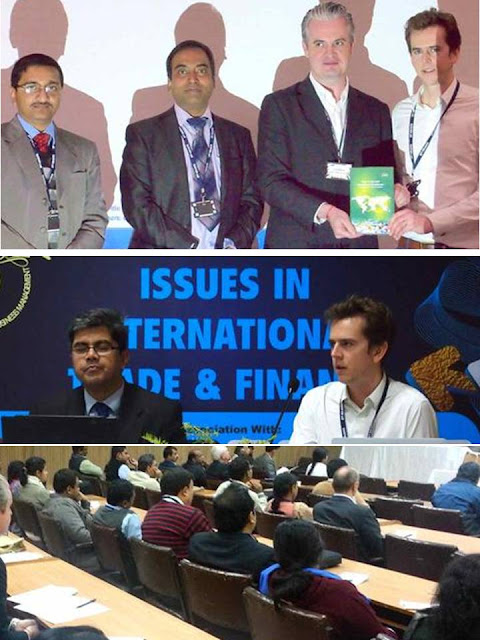 The book has seven chapters from eight contributors including the two editors, and me. The book should be ready for sale and distribution in the next few weeks. The publisher made only a few copies for the book launch.

My paper is 14 pages long including tables and references. I am posting below the first two pages :-)
--------

Universal Health Care and Private Provision in the Philippines

The pursuit of universal healthcare (UHC) or “Kalusugan Pangkalahatan” in Filipino, of providing each of the nearly 100 million Filipinos, access to good healthcare when they need it, is a noble goal. It is a goal that is shared by all stakeholders in the country.

The big question is how to attain it at the most efficient and least costly way, both to the government and households and taxpayers. The dominant thinking is to follow the European and North American models of universal healthcare, in which government takes the dominant role in the healthcare system, and most costs are underwritten by the public purse.  This explains the rising budget for the Department of Health at the national level, and health spending at the Local Government Unit levels. This is not sustainable as the Philippine government is still heavily indebted, even though the debt/GDP ratio has improved compared to a decade ago.

The Philippine government recognises this fiscal constraint and has limited its additional health subsidy to the “really poor”.

II. Demand for Healthcare in the Philippines

The Philippines is the 12th biggest country in the world in terms of population size. From only 60.7 million in 1990, it has grown to 92.1 million in the August 2010 survey, and it is projected to reach 100 million in 2015 or 2016. The population is growing at around 1.7 million people a year, net of death and migration. At this rate, it is like creating an equivalent of a new Singapore (5 million) every 2 years and 11 months, or a new Hong Kong (7 million) every 4 years and 2 months.

It is a generally young country with about 43 percent of the population just 19 years old or below. So dealing with pediatric diseases is an important consideration for the country. The senior citizens, those 60 years old and above, are now nearly seven million or about seven percent of the total population. The advantage is that the working age population, those who are between 20 to 59 years old, comprise about half of the total. Life expectancy is not high compared to many other countries but there is improvement compared to several decades ago.

The government is aligning its poverty reduction, healthcare and other targets with those of the United Nations’ Millennium Development Goals (MDGs). It is expected that targets relating to infant and child mortality will be met within four years. Maternal mortality remains a moajor problem, and still occurs at a rate more than four times the target.

In addition, the prevalence rate for tuberculosis remains high although TB detection and cure rates have improved and are close to the MDG targets.