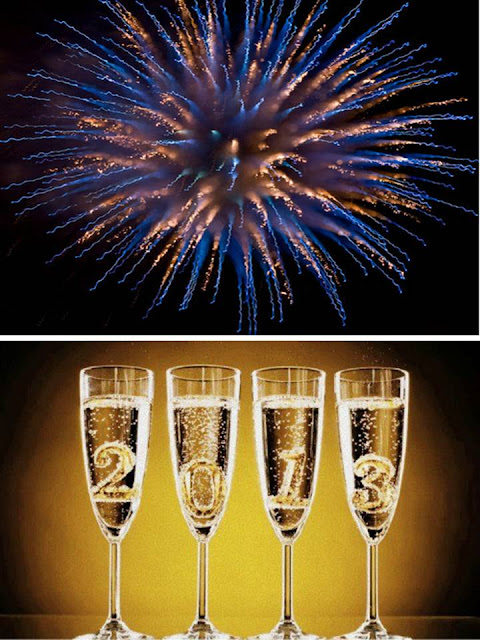 A good friend, Boye Quiambao, posted this in her facebook wall yesterday, I like it, so am reposting here.

Take twelve fine, full-grown months and see that these are thoroughly free from old memories of bitterness, rancor and hate. Cleanse them completely from every clinging spite. Pick off all specks of pettiness and littleness. In short, see that these months are freed from all the past -- have them fresh and clean as when they first came from the great storehouse of Time. Cut these months into thirty or thirty-one equal parts. Do not attempt to make up the whole batch at one time (so many persons spoil the entire lot this way) but prepare one day at a time.

Into each day put equal parts of faith, patience, courage, work (some people omit this ingredient and so spoil the flavor of the rest), hope, fidelity, liberality, kindness, rest (leaving this out is like leaving the oil out of the salad dressing— don’t do it), prayer, meditation, and one well-selected resolution. Put in about one teaspoonful of good spirits, a dash of fun, a pinch of folly, a sprinkling of play, and a heaping cupful of good humor.

Amen to that. Although it seems hard to follow all those gems of thought...

On New Year's eve, I noted that the previous night, December 30, I did not hear firecrackers in our area in Makati. I took it as a good sign that many Filipinos have abandoned the idea of spending their money on costly, noisy and sometimes dangerous firecrackers. 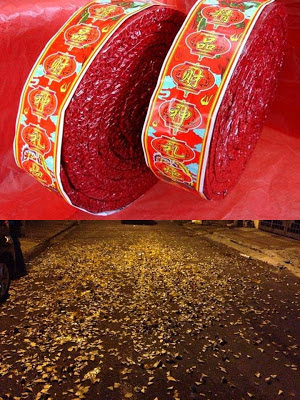 I was wrong. By December 31, starting around 10:30pm, various loud blasts could be heard, getting louder and more frequent as 12am was approaching. My wife stayed inside the house, in bed with our two young girls, while I got out of the house before 12 midnight, I saw many people on the street, a few  were lighting various firecrackers while most were just looking on and cheering.

On the right, that's the "sinturon ni Judas" or Judas' belt, a long line of firecrackers attached to each other. Once lighted on one end, there will be hundreds of explosions one after the other, really loud, one has to stay at a distance. And see the remains after those long belts have exploded.  Photos not from my camera, got them from the web. 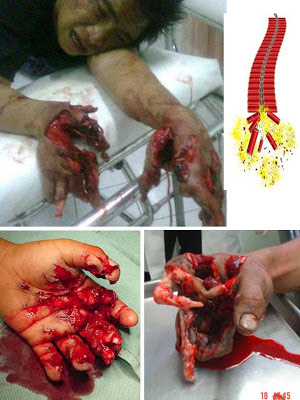 Some of the victims of those firecracker explosions on their hands, previous years. Photos from the web.

A friend called that firecracker addiction as "national insanity". Well, not exactly, more of personal insanity. I notice that less and less people are buying and exploding those firecrackers, they would rather look up the sky and watch various colorful fireworks on display at various parts of Metro Manila. Thanks to some rich individuals and corporations who spend big time for those elaborate and expensive fireworks, they entertain thousands of people.

Late last year, I attended three different parties/events in two weeks and they all have live band performers. 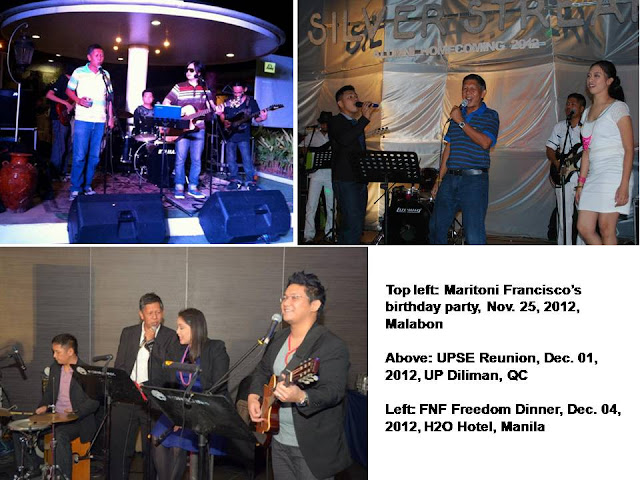 I like jamming with good and friendly bands. Just sing one or two songs and that's it. Usually I'm the first to do it, then other people in the audience later come up the stage and sing with the band too.

Hoping that 2013 will be better than 2012. Career wise, economically and financially, good health to my family and friends.