Agriculture is among the sectors with heavy government intervention and subsidy. In some European countries like France, the number of government agri-related bureaucrats could be as many if not plentier, than their farmers.

During the Federation of ASEAN Economic Associations (FAEA) conference last November 28-29, 2012 held at the PICC, Manila, one of the panel discussions was on agriculture and food security. I did not attend that panel because I went to the panel on Competition policy. Nonetheless, I have some of the presentations in USB during the conference.

One of the papers in the Agri panel was "Strategies for Influencing the Rice Price Stabilization in Indonesia" by Wijoyo Santoso, Nurhemi, Guruh S. Rokhimah, all from Bank of Indonesia.

It's not a free market oriented paper, so I won't bother to copy their discussions, I just copy paste here some of their tables and illustration. These tables can be useful, especially the last one, I think the major rice importing countries. 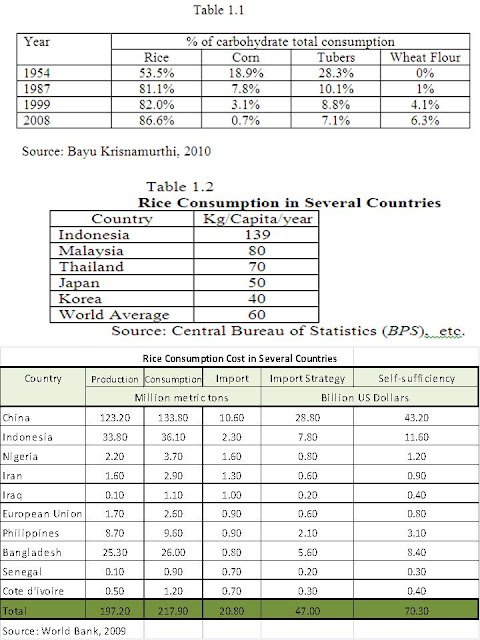 Major rice producers and exporters are Thailand and Vietnam. We often hear that "their rice scientists only studied in IRRI and UPLB but look where they are now, more advanced in rice production than the Philippines.

My usual answer to such claim is this: Even without government support or subsidy or technology, Thailand and Vietnam have natural comparative advantage in rice production compared to the Philippines because of the following:

1. They have few typhoons a year, the Philippines has about 19 per year, mostly coming from Pacific Ocean. Should these storms reach Vietnam or China, they are generally weaker and less destructive compared to their landfall in the Philippines.

3. They have huge rivers like Mekong that can irrigate millions of hectares of rice land in several SE Asian region. Vietnam also gets water from Ton :Le Sap (?) river that crisscrosses Cambodia-Vietnam. The Philippines has only a few big rivers as the water easily drains into the sea.

The comparative advantage of the Philippines is tourism, not rice production. We should not aspire for "rice self-sufficiency" but rather, "rice or food security." Hong Kong, Japan, Singapore, S.Korea, they have "food security" even if they are not rice self-sufficient, they have the money and resources to buy the type and quantity of rice that they want. But I digress.

Here's one graph or illustration from the same paper by the three authors, about buffer stock stabilization by the government. In normal condition, demand (D) meets supply (S1) and an equilibrium price is set at their intersection point. But during bumper or big harvest, the supply can move to S3 while during prolonged drought or bad storms or pest attack, supply can move to S2.

Government sets a base or "floor" price where it will intervene by buying the excess harvest of farmers to prevent the price from further going down. Government also sets a high or "ceiling" price where rice consumers will be adversely affected by very high prices, so government will sell its stored rice. 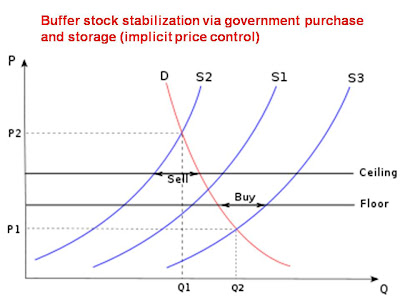 I labeled that graph as "implicit price control" via government purchase, storage and sale of rice. In both cases of government buying and selling, taxpayers money is used for such price stabilization goal. In the Philippines, the "buy high, sell low" price intervention is done via the National Food Authority (NFA) and this agency is one hell of public debt generator every year, losing billions of pesos every year.

One problem with this model is that it assumes that only the supply curve can shift while demand is stationary. If such government intervention is absent or kept to the minimum, rice D curve can also shift to the left (reduced consumption temporarily, shift to other staples) or to the right (higher rice consumption). Rice traders -- individual or corporate traders, rice farmers themselves via cooperatives, other NGOs -- and importers can fill the gap during the seasonal up-down-up-down in rice prices, and rice supply can be stabilized even with little or zero government intervention.

Just leave the consumers' demand curve to shift and adjust to changes in the producers' and traders' supply curve. As shown by industrializing and industrialized Asian economies, people's consumption of rice declines relative to the rise of their household income. Wealthier people shift to bread, potato, pasta, vegetables and fruits for their staples and consume less rice. The latter's rice D curve therefore shifts leftwards, allowing rice supply to be dedicated more for the poor.

The main function of government is to enforce the rule of law, protect private property rights and the people's right to life and liberty. People will not be happy and would feel insecure if they get all types of subsidy (rice, tilapia, poultry, education, healthcare, housing, etc.) but criminals can steal their property or abduct, rape or murder their children anywhere.
------------