The Asia-Pacific Taxpayers Union (APTU) meeting will be held in Bangkok this coming March 1-2. I got this notice and invite from a good friend, the Chairman of APTU and Sec-Gen. of the World Taxpayers Association (WTA, http://worldtaxpayers.org/), Mr. Bjorn Tarras-Wahlberg.

I met Bjorn first time in Seoul, S. Korea in October 2006 for the APTU meeting. I was then an official of the Philippine Taxpayers Union (PTU) headed by Mr. Veredigno "Vernie" Atienza. Photo here from left: Bjorn, Grover Norquist of the Americans for Tax Reforms (ATR, http://atr.org) during the Pacific Rim Policy Exchange in October 2009 in Singapore.

I realized I could not do my function well with PTU as I was also busy with Minimal Government Thinkers, so I told Vernie that I have to leave PTU but will work with it in its main advocacy -- to have a low, flat income tax (corporate and personal) in the Philippines. Abolition of income tax is actually possible as the government has dozens of various consumption-based and business taxes and fees, both national and local government units.

Bjorn came to Manila a few  times in 2009 and 2010. I was able to join him and Vernie in his meeting with former DOF Secretary Gary Teves (my former boss in Congress and in Think Tank, Inc.) and at Bjorn's talk at the Rotary Club of Rizal West, among his other activities here. 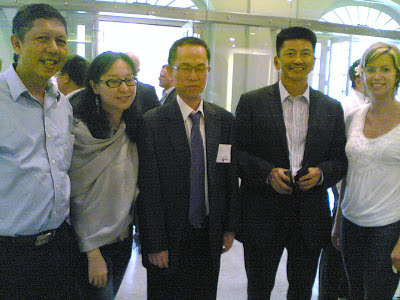 Additional photo also during the Singapore conference in 2009, Mr. Kim Sun-taek (middle), President of the Korea Taxpayers Association (KTA); the girl beside her was his English interpreter as Mr. Kim does not speak English. Next to Mr. Kim is Jargal Dambadarjaa of the Mongolians for Fair Taxes and Wise Spending, and Ms. Jamie White, then head of the Grassroot Institute Hawaii.

I told Bjorn that I cannot attend the Bangkok meeting this coming March due to my limited financial resources now. But I will try to blog and write about this important meeting. Below is the conference agenda and other details.
----------

Arrival: Thursday Feb 28. Welcome Drinks from 7 p.m. followed by dinner.
Departure: Sunday March 3 or when it suites you. Earlier arrival and longer stays are possible.

How to get Members & Money
5. Creating a Strategic Plan that Works (Mr Troy Lanigan, Canadian Taxpayers Federation)
6. Different Techniques for Getting Members (Mr Bjorn T-W)
7. Empower your Donors to Fulfill Their Wishes - the different fundraising in Canada (Mr T. Lanigan)
8. How Beijing Taxpayers manage to get 170.000 members and how extensive service can finance the organization,
now developing independent taxpayers associations all over China (Mr F. Liu, China)
9. How South Korea has achieved 1.300.000 internet members and how these are used and managed (Mr. Kim Sun Taek, Korea Taxpayers Association)
10. How a taxpayers association can work in developing countries (Mr Otieno Igogo, Tanzania Taxpayers)

Exchange of printed material
15. Exchange of magazine, books and other material between the member associations.
Bring your samples to Bangkok (Mr. Fengjiang Liu, Beijing Taxpayers)