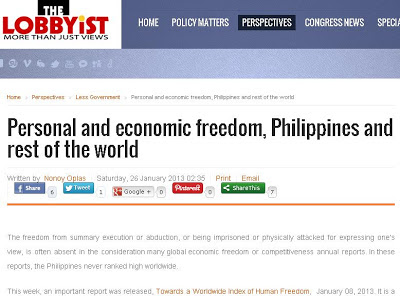 The freedom from summary execution or abduction, or being imprisoned or physically attacked for expressing one’s view, is often absent in the consideration many global economic freedom or competitiveness annual reports. In these reports, the Philippines never ranked high worldwide.

This week, an important report was released, Towards a Worldwide Index of Human Freedom,  January 08, 2013. It is a joint project of three big think tanks advocating more individual freedom and limited government – Fraser Institute in Canada, Liberales Institut in Germany, and Cato Institute in the US. It has a big and ambitious goal, to produce the world’s first comprehensive and conceptually consistent index of human freedom, composed of personal freedom and economic freedom.

Freedom is defined in the “negative” – the absence of barriers or coercion that prevent individuals from acting as they might wish. While government is the main source of external coercion, like people can not start any business unless  they get permits from various local and national agencies and pay various taxes and fees, other sources of coercion were also identified. Below are the factors in constructing personal freedom index. 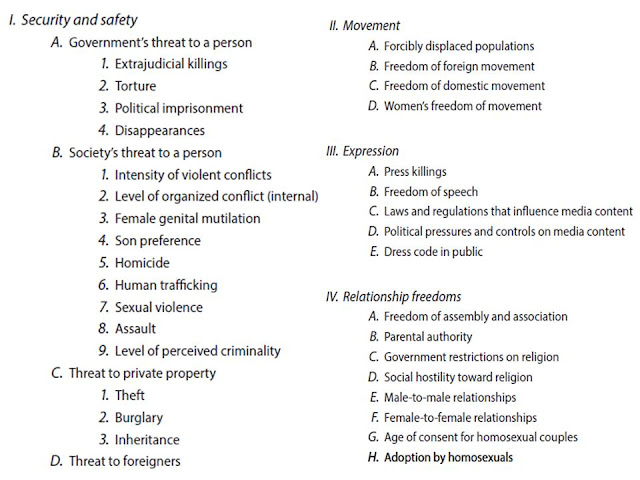 Source: Ian Vasquez and Tanja Stumberger, Chapter 3, An Index of Freedom in the World, Towards a Worldwide Index of Human Freedom, January 08, 2013

It is amazing how the authors have gathered such kind of data where a global comparison among many countries can be made. Check the link above how those concepts are defined, where the data were lifted, and how scores were made.

Source: same as above.

Generally, countries that have high scores in economic freedom also have high scores in personal freedom, at least for those in the top 10 or top 20. Singapore though is a big exception.  While it is #2 worldwide in economic freedom next to Hong Kong, it ranked very low on personal freedom with a score of only 6.6, should put in the 70+ in global rank. This report will definitely make the Singapore government unhappy.

Many big European economies like Spain, Germany, France and Italy have high scores in personal freedom but low score in economic freedom, reflecting their heavy business bureaucracies and taxes, that consequently pulled down their overall freedom index.

The Philippines is #67 overall. It ranked low in I. Security and Safety with a score of 5.6, and III.Expression, 6.3. But it ranked high in II. Movement with 8.6, and IV. Relationship Freedoms. Reports of extra-judicial killings, torture, political imprisonment and disappearances during the past administration significantly pulled down the country’s score in I.

There are at least two good news for the Philippines in this report. One, its average score in the three indexes is slightly higher than the global average. Meaning we have more personal and economic freedom compared to many people and countries around the world.

Two, compared to other major Asian neighbors, we have high degree of personal freedom, much higher than those in Singapore, Malaysia, Indonesia, India and China. Vietnam, Laos, Cambodia are among the Asian countries that were not included in the report yet.

As mentioned, the information on personal freedom were lifted from 2008 data. Future reports that will reflect 2010 and succeeding years of the current administration would generally produce higher score for the country.

The bad news is that economic freedom remains rather restricted in the country until now. The local and national governments here tend to think that entrepreneurship and job creation is a potentially criminal thing to do, so they imposed plenty of business permits, taxes and fees, that sap significant time and resources of entrepreneurs and investors. This is on top of a very protectionist Constitution that prevents foreign competition to many local business elites and oligarchies.

We hope that the Philippine government, local and national, will heed this type of international comparison. They add to either optimism or pessimism of Filipinos and foreigners alike, seeing where the Philippines ranks compared to other countries around the world. The government should learn to reduce business bureaucracies, reduce the itch for more taxes, permits and fees, and  focus on going after real criminals that bully and victimize the average citizens.

Over the short to medium term, the paranoia against foreign competition in many aspects of the country’s economy should be lifted via constitutional change.