I like this story from the NYT although this was published half year ago. A dedicated scientist at Washington University studying human gnome and lympoblastic leukemia has developed the same cancer that he is personally studying. and subsequently weakened him, awaiting death. His colleagues in the research team set aside many things they were doing and focused only on one thing -- find out what is that disease, how it developed, and how it can be killed. Below is portion of that news report. 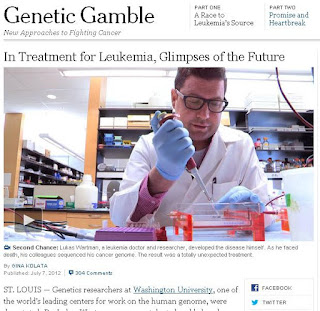 ...Dr. Ley’s team tried a type of analysis that they had never done before. They fully sequenced the genes of both his cancer cells and healthy cells for comparison, and at the same time analyzed his RNA, a close chemical cousin to DNA, for clues to what his genes were doing.
The researchers on the project put other work aside for weeks, running one of the university’s 26 sequencing machines and supercomputer around the clock. And they found a culprit — a normal gene that was in overdrive, churning out huge amounts of a protein that appeared to be spurring the cancer’s growth.
Even better, there was a promising new drug that might shut down the malfunctioning gene — a drug that had been tested and approved only for advanced kidney cancer. Dr. Wartman became the first person ever to take it for leukemia.
And now, against all odds, his cancer is in remission and has been since last fall.
While no one can say that Dr. Wartman is cured, after facing certain death last fall, he is alive and doing well. Dr. Wartman is a pioneer in a new approach to stopping cancer. What is important, medical researchers say, is the genes that drive a cancer, not the tissue or organ — liver or brain, bone marrow, blood or colon — where the cancer originates.
One woman’s breast cancer may have different genetic drivers from another woman’s and, in fact, may have more in common with prostate cancer in a man or another patient’s lung cancer.
Under this new approach, researchers expect that treatment will be tailored to an individual tumor’s mutations, with drugs, eventually, that hit several key aberrant genes at once. The cocktails of medicines would be analogous to H.I.V. treatment, which uses several different drugs at once to strike the virus in a number of critical areas....
---------

A combination of genetics science and pharmaceutical science is key to treating certain diseases, especially new or emerging ones. Which brings us to the importance of more medicine innovation and how it can be encouraged, or at least how now to impede it via more politics and more government intervention, like dishonoring intellectual property rights (IPR) like drug patents.

Below is another story on medicine innovation to treat HIV/AIDS. The good news is that more and more medicines and vaccines from more drug manufacturers are coming on stream. Since they are different from each other, both off patent and still patented, patients and health professionals can expect competition among them, both in efficacy and prices. Generic producers can help tighten the competition once newly invented drugs and vaccines have become off patent. The important thing is that someone or some firms must invent those new drugs first, assume all the risks and high cost of R&D. Once they are proven to be useful and safe, generic producers can come in later to produce new brands of the same useful molecules against HIV/AIDS.

More science, more innovation, and less politics. Public health and life expectancy are expected to be improving through time.
----------

“GETTING TO ZERO” new HIV infections and zero deaths from AIDS-related illnesses may sound difficult to achieve but significant progress in the prevention and treatment of HIV/AIDS is providing hope for patients and their families.

In time for World AIDS Day on Dec. 1, biopharmaceutical companies announced that around 73 medicines and vaccines are in the pipeline for the treatment and prevention of HIV.

Between 2011-2015, the World AIDS Days will have the theme of “Getting to zero: zero new HIV infections. Zero discrimination. Zero AIDS related deaths.” This highlights the need for greater access to treatment for all.

Nearly 40 medicines have been approved to treat HIV/AIDS in the past 30 years. There have also been advances in the diagnosis of the disease, allowing for earlier treatment and care.

The World Health Organization (WHO) attributed many of the gains to life-saving antiretrovirals that reduce the amount of virus in the blood so that patients has increased chances of staying healthy and have less risk of passing the virus on to others.

HIV can be suppressed by combination antiretroviral therapy (ART) consisting of three or more antiretroviral (ARV) drugs. While ART does not cure HIV infection, it controls viral replication and allows an individual’s immune system to strengthen and regain the capacity to fight off infections (www.who.int).

Even with the progress, there remain great opportunities to intensify research for better treatment and prevention of the disease. Until now, there is no cure for HIV/AIDS.

The WHO said that HIV has claimed more than 25 million lives in the past three decades. Globally, about 34 million people are living with HIV in 2011.

In the Philippines, there were 295 new HIV positive individuals confirmed by the STD/AIDS Cooperative Central Laboratory in October this year, or 48% higher compared to the same period last year. In January to October this year, there were 892 more new HIV cases, 48% more compared to the same period in 2011. The significant increase was observed starting July 2011 onwards, mostly breaching 200 or even 300 new cases per month.

The Department of Health-National Epidemiology Center (DoH-NEC) reported 2,761 HIV cases, of which 148 were reported AIDS cases, from January to October this year. Around 748 young people (15 to 24), and four children below 15 were part of this total national figure.

In support of the Millennium Development Goal 6 to stop or reverse the incidence of HIV/AIDS by 2015, the government through PhilHealth, has rolled out an outpatient package to increase patient access to treatment and education. First implemented in 2010, the Out-Patient HIV/AIDS Treatment (OHAT) Package aims to provide patients access to ART and the benefit was later expanded to include treatment for tuberculosis.

In the battle against HIV/AIDS, PhRMA reported that medicines in development include a gene therapy that uses genetic material to remove disease-causing aspects of the virus; a transdermal vaccine that helps suppress virus replication and destroys HIV-infected cells; and a first-in-class medicine intended to prevent the HIV virus from breaking through the cell membrane.

Many of the medicines are in Phase I and II of the long, expensive and complex drug discovery process. Phase I of the clinical trial involves a small group of people, usually between 20 and 80 healthy adult volunteers, to evaluate a drug’s initial safety and tolerability profile, determine a safe dosage range, and identify potential side effects. Phase II is the stage in which the drug is given to volunteer patients, usually between 100 and 300, to see if it is effective, identify an optimal dose, and to further evaluate its short-term safety.

When a candidate drug reaches Phase III, it is given to a larger, more diverse patient population, often between 1,000 and 3,000 patients or more, to generate statistically significant evidence to confirm its safety and effectiveness. They are the longest studies, and usually take place in multiple sites around the world (For the full report, go to www.phrma.org).

Biopharmaceutical companies have expressed commitment to continue research to prevent or treat HIV/AIDS. Policies and collaborations that encourage innovation and healthcare access are critical to this mission
-----------