PhilHealth Watch 14: Not Yet 85 Percent Coverage

* This is my article yesterday in the online magazine,
http://thelobbyist.biz/index.php/perspectives/less-government/item/142-universal-healthcare-and-philhealth
----------- 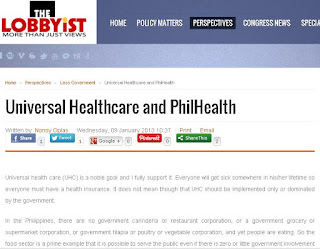 Universal health care (UHC) is a noble goal and I fully support it. Everyone will get sick somewhere in his/her lifetime so everyone must have a health insurance. It does not mean though that UHC should be implemented only or dominated by the government.

In the Philippines, there are no government carinderia or restaurant corporation, or a government grocery or supermarket corporation, or government tilapia or poultry or vegetable corporation, and yet people are eating. So the food sector is a prime example that it is possible to serve the public even if there is zero or little government involvement in direct service provision. The key is product and price differentiation, market segmentation, which allows various food producers and suppliers to serve various food consumers with different taste, preference and budget.

UHC is attained if at least 85 percent of the total Philippine population is covered by the Philippine Health Insurance Corporation (PHIC or PhilHealth). Since its creation in 1995 and despite various schemes from various administrations (Ramos, Estrada, Arroyo, Aquino), PhilHealth has not attained that 85 percent beneficiary coverage. Last year though, PhilHealth reported that it has finally achieved the UHC coverage. 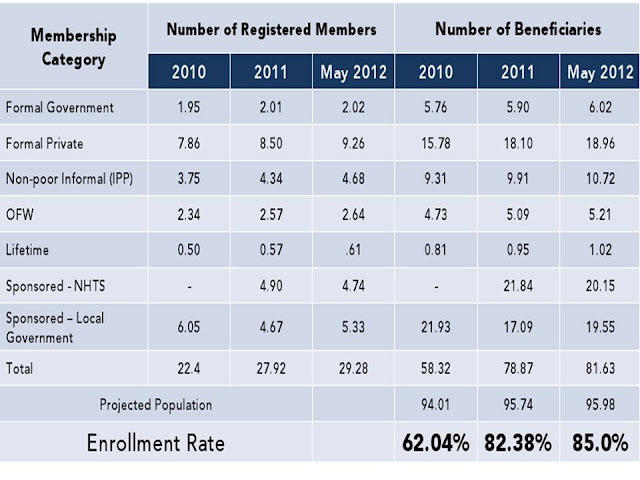 I think there is something wrong with the above numbers. PhilHealth assumes that most if not all members have dependents – legitimate non-working spouse, legitimate children below 18 years old, and parents above 60 years old. This is not true.

Many members either do not have any dependent yet, or have just one or two. For instance, parents who are either below or above 60 but still working are PhilHealth members themselves and cannot be declared as dependents. If they have three children who are already working and have no families yet, then that is equal to five members and all have no dependents.But for PhilHealth , there are 10 to 15 people who are covered or enrolled as beneficiaries already. I think this is dishonest math.

In the above table, PhilHealth made the following multipliers: formal government x 3; formal private, OFWs and lifetime, x 2; IPP x 2.3; Sponsored NHTS x 4.2, Sponsored LGUs x 3.7. So the 29.28 million members translate to 81.63 million people or an average multiplier of 2.8.

If we compare labor force data from the National Statistics Office (NSO), there is a big discrepancy with PhilHealth data.

This already shows an 8.4 million discrepancy with actual or registered PhilHealth members. If the 2.6 million OFWs are not included as they are not included in the NSO labor force survey data, plus the 0.6 million lifetime members (mainly the senior citizens and retirees), the discrepancy goes up to 11.6 million people, even assuming that the very poor, sponsored individuals are all employed, which is not the case.

One way to correct this possible dishonesty in beneficiary coverage is for PhilHealth to give a health card not only to registered members but also to all their declared dependents. So that even babies and children should have their own health cards too, to be presented to hospitals when they are confined.

On another note, the Department of Health budget has been ramping up recently, rising by around P10 billion a year from 2010 to 2013, mainly to expand PhilHealth coverage of more than 5 million poor households who are also in the CCT program of the DSWD.

On top of that, the mandatory contributions for each member have been hiked except the lifetime members who pay none. 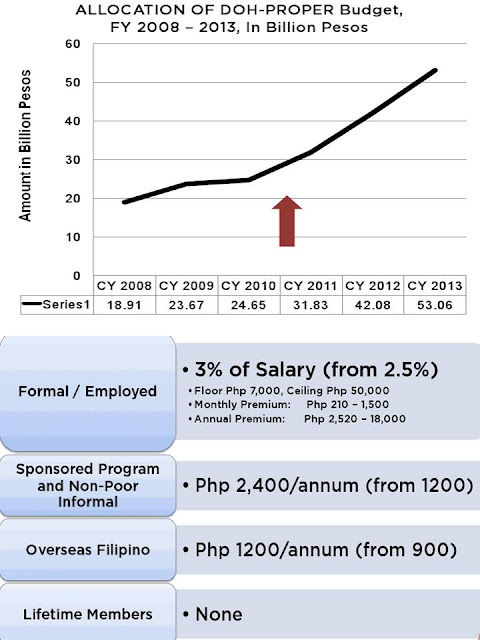 Then the hike in Sin Tax law or RA 10351 was recently enacted. These three moves – hike in regular DOH budget, hike in PhilHealth mandatory contributions, and higher revenues from higher taxes on tobacco and alcohol products – mean even bigger money and role for government in healthcare.

While “better government healthcare for the poor” looks promising, promises are often different from reality. We go back to the above discussion in the food sector where there is not a single government corporation or agency involved in direct provision of food to the people and yet people are eating.  The trick is competition among various food providers and suppliers, they bend backwards if needed to attract more consumers. Competition is absent when government monopolizes a service, like healthcare.

One alternative scheme that can reflect the reality in the food sector, is for government to shift to health voucher system. Not this year or the next, but a possibility that the DOH and PhilHealth can consider in the near future. We will discuss this proposal in another paper as it will require some elaborate explanation.
---------

These two tables below are part of Dr. Banzon's presentation but not included in the article above. It shows PhiliHealth funding with and without the Sin tax money as there was some uncertainty yet in late November whether the sin tax bill will become a law or not. With the enactment of the law (RA 10351) in mid-December 2012, they will be using the second table for PhilHealth spending this year and succeeding years. 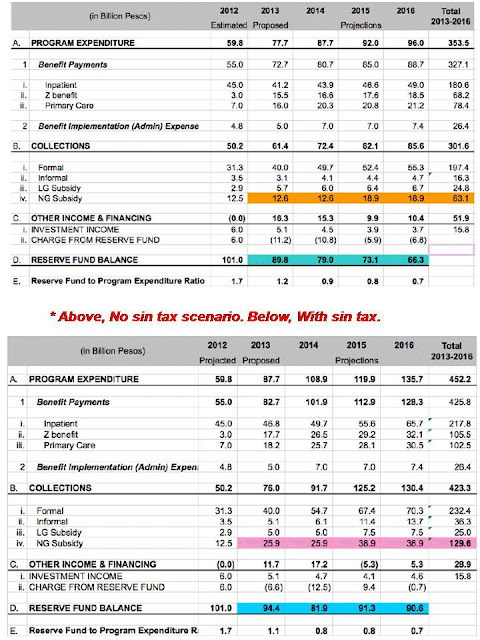