* (This is my article today in thelobbyist.) 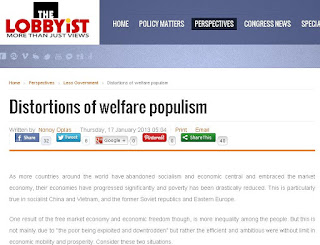 As more countries around the world have abandoned socialism and economic central and embraced the market economy, their economies have progressed significantly and poverty has been drastically reduced. This is particularly true in socialist China and Vietnam, and the former Soviet republics and Eastern Europe.

One result of the free market economy and economic freedom though, is more inequality among the people. But this is not mainly due to “the poor being exploited and downtrodden” but rather the efficient and ambitious were without limit in economic mobility and prosperity. Consider these two situations.

Under socialism, if the average per capita income of the very poor was  $1 per day and that of communist party officials and their cronies was $100 per day, then that’s a 1:100 income gap between the two extreme income groups.

Under a free market economy, if the average per capita income of the very poor was $5 per day but that of the very efficient and lucky was $50,000 a day, then that’s a 1:10,000 income gap between the two extreme income groups.

Inequality is worse under the latter but the overall condition of the poor is better than under a socialist economy. If this is not true, those countries that abandoned socialism two to three decades ago should have gone back to economic central planning and state ownership of all businesses, land and other means of production.

Nonetheless, social morality and even the politics of envy has taken the upper hand in most public policies around the world recently. The result is the expansion of welfare populism worldwide, from the developed Europe and North America to the middle income and poorer countries mostly in the south.

By giving more power to government to intervene almost arbitrarily in many aspects of entrepreneurship and ordinary lives of the people, welfare populism has resulted in economic and social distortions.

During the Economic Freedom Network (EFN) Asia Conference held in Hong Kong last November 6-7, 2012 attended by this writer, welfare populism was extensively discussed with some country case studies. The event was jointly sponsored by the Friedrich Naumann Foundation for Freedom (FNF) and the Lion Rock Institute, a free market think tank in Hong Kong.

Among the country experiences discussed were that of Thailand, South Korea, China, Europe and Latin America. Below is a summary of presentation for these countries and continents.

The economic and social distortions were not good. In the case of the  rice pledging scheme, the price tag was a hefty $35 billion benefitting three million not-so-poor farmers, it increased the public debt significantly, high corruption was suspected, many farmers did not care much about rice quality and productivity, and smaller rice traders were edged out.

For the first car program, the price tag was $1 billion and resulted in more traffic congestion as the number of new cars on the roads increased from 78,000 to 100,000 a month, the average road speed in Bangkok is only 16.7 km/hour and is declining by 1 km/hour a year. And Bangkok residents with asthma has increased from 5 percent to 10-15 percent.

The free tablets for first graders resulted in addiction to computer games by the young students, worsened by insufficient or no broadband access, and inability to write of these students.

The prominent populist policies were income support, public pension and insurance for all (health, employment, industrial accident insurance, etc.), minimum wage, free child care, universal school meal. All political parties, administration or in the opposition, promise a more welfare state if they are in power.

The results were indeed distortionary as the projected cost of these additional spending is estimated at $520 billion on top of existing welfare programs. This will require tax hike or public debt hike in the near future. These programs will spike welfare spending to reach 45 percent of GDP and public debt will reach 216 percent of GDP. Without welfare reform, Korea’s future will be similar to Greece and Argentina.

During Mao Tse Tung period, continue global revolution and liberate other people around the world, but China degraded to poverty.

During Hu Jintao period, from overcoming poverty to addressing inequality, from anti-poverty first to GDP first plus anti-inequality and stability.

4. Europe and Latin America: by Dr. Francisco Luis Perez Exposito, Tamkang University, Taiwan, “The surge of Neo-populism in Latin America and Europe in the XXI Century”.

Such neo-populism is characterized by being left leaning, anti-capitalist, rejection of austerity and welfare cuts, more welfare rights.

In Europe populism, they are allied with nationalism philosophy, anti-EU, anti-Islam, anti-foreign workers and anti-regional integration.

In Latin America, they are leaning towards nationalism and socialism, anti-capitalism, anti-imperialism and foreign interests, and anti-neoliberalism. These neo-populist groups in both continents have  prospered by blaming others (foreign and locals alike), looking for scapegoats and virtual vengeance.

The economic distortion of welfare populism is clear in the ever-rising public debt of many developed welfare states, below. 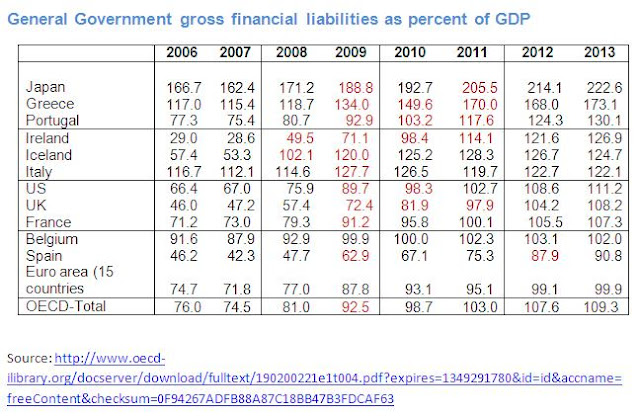 High welfare programs even financed by heavy borrowings are supposed to increase the productivity of the people so they can later repay those debts plus interest. Unfortunately, the law of unintended consequences kicked in once again. What resulted was increased dependency of the people to the state and the corruption of individual values, relegated more personal responsibility to the background and pushed more  government responsibility in many aspects of the people’s lives.

There is a need for many governments to stick to their primary function: to promulgate the rule of law and protect the citizens’ right to life, liberty and private property. Forcing social equality and promoting a culture of dependency and entitlement is not the way to encourage the people, poor and non-poor alike, to strive more to improve their own lives and that of their communities.
------------