Cuba's healthcare socialism is being touted by some health NGOs and academics here as a possible "model" for the Philippines. They like the service monopolization and big spending on healthcare by the socialist government there.

Among those who gave praises for the Cuban state monopoly "political will" in healthcare was Dr. Reynaldo Garcia, a life scientist academic and manager of technology and innovation at the same time. He is  the Director of the Technology Transfer and Business Development Office of the University of the Philippines (UP) System and a Full Professor at the National Institute of Molecular Biology and Biotechnology in UP Diliman. He got his PhD in Molecular Biology at the Australian National University (ANU) and his business degree (Master’s in Bioscience Enterprise) at Judge Business School and the Institute of Biotechnology of the University of Cambridge in England.

During the 9th Science, Technology, Innovation, Knowledge and Entrepreneurship (STIKE) Kapihan Series on the subject, Technology Transfer and Healthcare last September 27, 2012, at the Asian Institute of Management (AIM) organized by the Dr. Stephen Zuellig Center for Asian Business Transformation, Dr. Garcia showed these slides below, among others.. My discussion of his talk on tech transfer and IPR is here, IPR and Medicines 25: Patents, Diagnostics and Technology Transfer (October 08, 2012).

The four charts show that (a) illiteracy rate in Cuba declined fast, (b) infant mortality as of 2000 was as low as that in the US, (c) physicians per capita is more than double that in Latin America and the US, and (d) life expectancy at birth similar to that in the US as of 2004. Lower photo shows free healthcare in Cuba. 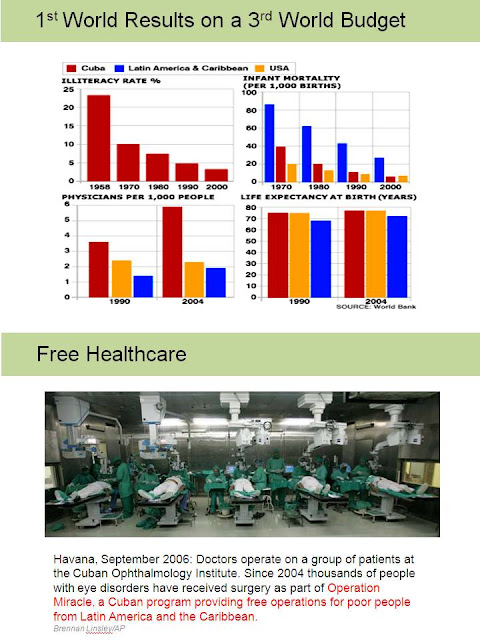 Dr. Garcia also said that Cuba has the biggest biotech facilities in the developing world. There was no year indicated, but I think this was in late 2000s level. In terms of vaccine development, Cuba was also high tech. 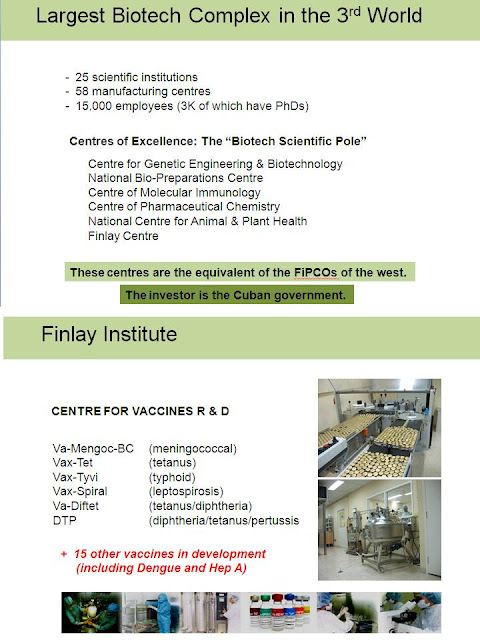 And more vaccine R&D capacity, as of 2007. Cuba is known for good quality cigar exports, smoking is prevalent, so its government developed a vaccine against lung cancer. 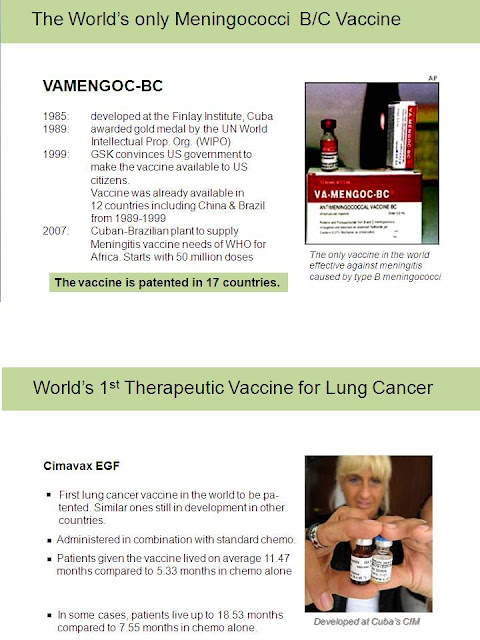 I have high regard for the academic and professional credentials of Dr. Garcia but I cannot agree with him do not think that state monopolization of various health services -- from medicines and vaccine innovation and invention to hospitalization care -- is a good thing. Here now are my comments to Dr. Garcia's points above.

One, the good health indicators in Cuba at least as of 2004, do not match with its economic development or degree of industrialization. So data sources may be suspect, not indicated in his slides.

Two, assuming that the high physicians per 1,000 population data is correct, more than twice that of the US, I think Cuban government hospitals may simply be bloated with many doctors relative to number of patients. They could be mostly general practitioners with very few specialists.

Three, free healthcare is being done in many developed economies with nationalized or government monopolized healthcare system, and the result is almost always the same: demand is much much larger than supply, resulting in either (a) healthcare rationing like some patients waiting for days, weeks or even months to get free healthcare, (b) lousy services like seeing patients only for two or five minutes, write drug prescriptions then call the next patient, and/or (c) huge fiscal deficit and public debt as healthcare is a bottomless pit of spending. Cuba could be suffering from any or both of such malady.

Four, it is good news that the Cuban government has invested in medicines innovation and almost surely, generic production. But not being subjected to competition and international healthcare accountability system, I doubt if cases of adverse drug reactions (ADR) and similar problems are being appropriately addressed, like drugs recall and compensation of the adversely affected patients. Patients have no or little options anyway, there is only the government as sole drug distributor and/or manufacturer.

In contrast, in a competitive environment, if an innovator company produces a new drug, supposedly effective but has several ADRs and side effects, the company does not wait for huge public outcry or multiple lawsuits, it has to recall and pull out such immediately before more damages can happen and its entire corporate brand will be destroyed.

In some reports though, hundreds of Cuban doctors have been migrating to other countries. From The Vincenton Post,


Meanwhile, Venezuela's dictator Chavez is drying of cancer in a Cuban hospital. From the Investors.com, Hugo Chavez Hit by Cuba's Surgical Strike.

In July 2011, during (a)... summit in Caracas, Brazil's President, Dilma Rousseff, told a few of her colleagues — in private — that Chavez was likely to die as a result of 'his excessive paranoia rather than as a consequence of his serious — yet treatable — cancer,'" wrote Venezuelan consultant Pedro Burelli in a newsletter.

"What she meant to say," Burelli added, "was that by choosing secrecy in Cuba over medical competence at the Sirio-Libanese Hospital in Sao Paulo (where she had been treated successfully for lymphatic cancer) Chavez had condemned himself to a shorter life."

Burelli noted that it corresponded to his own sources, who told him that Chavez's chosen successor, Foreign Minister Nicolas Maduro, flew to Brasilia to meet with Rousseff and her oncologist.

He presented the diagnoses from Caracas and Havana and the Brazilian specialist "considered it treatable under world-class protocols available in his center."

Maduro signaled interest. But the Chavista regime then demanded to pretty much take over the 400-bed hospital, which the Brazilians rejected. "From that moment on the patient was doomed," Burelli wrote....


Too bad for Mr. Chavez, He's got lots of money from petroleum socialism and when he became seriously ill, health socialism in Cuba may not be able to save him. Another news from yahoo:
Cuba to free doctors from onerous travel rules

Hospital directors learned of the new policy, which takes effect Jan. 14, in a Saturday meeting withHealth Minister Roberto Morales and word of the change was relayed in hospital staff meetings, according to the doctor, who attended one of the subsequent gatherings.

The minister's directive: "A doctor will be treated like any other citizen starting now and can exit freely, as long as the destination country allows it" by issuing an entry visa, said the physician, who spoke on condition of anonymity because he was not authorized to talk to foreign journalists.

"Apparently it has been completely repealed," he said. "No restrictions of any kind.


By indirectly imprisoning many Cuban doctors in their own country, their government has prevented them from acquiring more training and specialized education with more foreign practitioners, using more modern facilities, medications and other  treatment.

I hope that more economic freedom for their people like free mobility across countries will be tolerated by the Cuban socialist leaders. Similar one-party system China and Vietnam already allow this.

Ultimately, I hope to see more political, economic and personal freedom be experienced by more people around the world. Especially from the clutches of dictatorial and totalitarian governments.
---------

Thanks for this Nonoy. Great piece, very factual. You presented the other side first, and then demolished it with facts.

I must say that I was simply marvelling at the biotech innovations in Cuba and how political will can make a difference in coming up with life-saving drugs and vaccines in a very short time. I am a scientist first and foremost and am very non-political. My apologies if it appeared to some that I think the Philippines should follow Cuba's healthcare socialism. I certainly have been quoted out of context.

I am NOT for state monopolization of health services.