"Fair competition" is a nice and neutral term that many sectors in society can identify with. People love competition, the way they like Manny Pacquiao competes with some of the world's great boxers on the ring, or the country's Azkals soccer team competes with great soccer players in Asia. 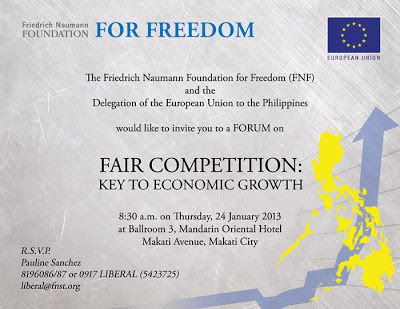 This Thursday, I will attend this forum organized by the Friedrich Naumann Foundation for Freedom (FNF). I believe in the formulation that competition is key to economic growth. This is similar to the Economic Freedom Network (EFN) Asia conference theme in Kuala Lumpur in October 2011, "Competition: Engine for Growth".

The line up of speakers and panelists for the forum on Thursday is impressive, below. 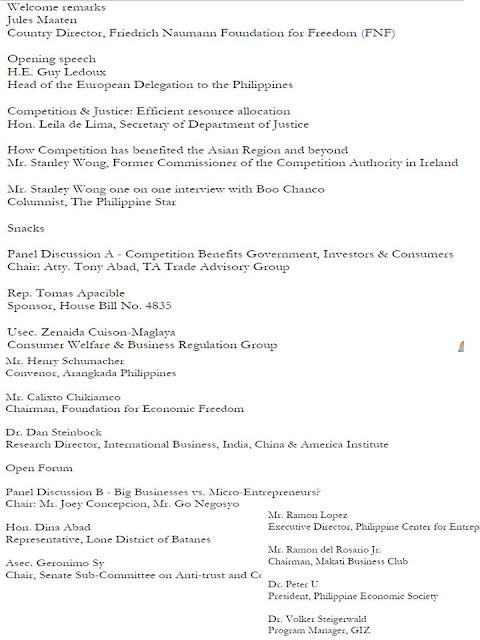 My thoughts on this subject is that no matter what kind of "Competition Law" that the Philippines will enact, there will be no fair or fierce competition in many important sectors of the economy like power generation, electricity distribution, airlines, shipping lines, bus lines, real estate, malls, water, media, agri-business, universities, hospitals, various professions, and so on.

Why? Because of the Philippine Constitution. Foreign business competitors are simply limited if not outrightly prohibited from competing with local businessmen and professionals in these sectors and sub-sectors. So we Filipinos and Philippine-based foreigners simply have to endure and be contented with whatever the local players can provide us. Where there is relative complacency due to limited competition, service provision by some if not many local players can be poor and mediocre.

Like internet speed. While we can buy modern cell phones, laptops and desktops from abroad as these are  freely-traded commodities from many big global players and manufacturers (Samsung, Apple, HTC, HP, Toshiba, etc.), internet speed is slow if not unstable in many areas as there are only few ISPs and telecom carriers domestically.

While such change in the Constitution is not yet here, I agree that we will have to tinker with some existing laws in order to remove rigid rules that tend to protect one group of players over the others.

But wait, this will also mean the creation of another bureaucracy, the Fair Trade Commission FTC or an Anti-Trust Commission or Competition Regulation Authority or other names.

Will try to write another blog post after the conference on Thursday.
----------