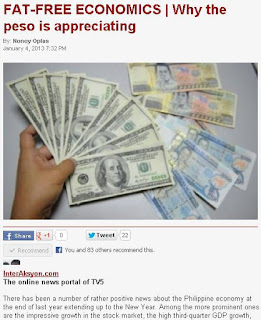 There has been a number of rather positive news about the Philippine economy at the end of last year extending up to the New Year. Among the more prominent ones are the impressive growth in the stock market, the high third-quarter GDP growth, and the peso appreciation. The latter is often seen as an indicator of confidence in the local economy by investors abroad, whether institutional or individual.

They bring their foreign currencies into the Philippines for investment, tourism and recreation, support for families and friends here, and for various other reasons. These increase the demand for the Philippine peso relative to other currencies, at least temporarily, resulting in the peso appreciation. Here are some relevant numbers.

Among developed and emerging economies in Asia, only the South Korean won had a larger appreciation than the peso. The Indonesian rupiah, Japanese yen, Indian and Pakistan rupees even depreciated relative to the US dollar (see Table 1). 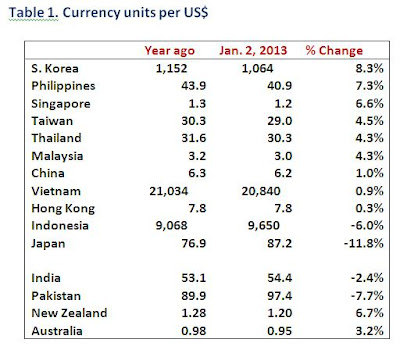 When the peso (or other currencies) appreciate relative to a major currency, many sectors benefit like importers, Filipinos who are travelling abroad, other foreign currency buyers. The prices of imported petroleum products can go down even if world prices have stabilized or slightly increased, benefitting the transportation, industrial and other sectors of the economy.

Some sectors though are worse off, like the families of the OFWs, exporters, and business process outsourcing (BPO) firms.  There are winners and losers in every change in economic conditions. It is just a question of how much is the net gain or net loss for the whole economy.

What could be the main contributors to the peso and other Asian currencies’ appreciation or depreciation?

The most proximate explanation is the current account balance, which comprises exports less imports of goods and services (merchandise and non-merchandise trade, overseas remittances) and transfers. So countries that have negative or low balances tend to suffer currency depreciation.

Another factor is the budget balance although the causality between this and currency movements is not very clear, more of a slight interrelationship. Nonetheless, countries that have persistently high budget deficits and high public debt are candidates for future fiscal and economic instability. Below are some numbers to crunch. 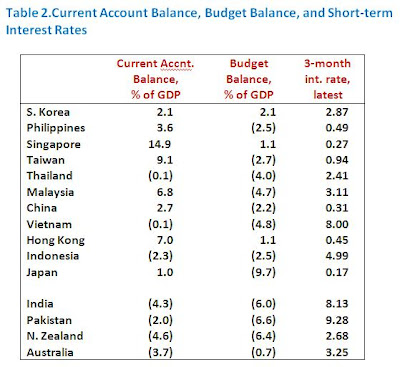 Short-term, three-month interest rates are included in the above table. With the exception of Hong Kong and Japan, countries that experienced currency depreciation or low appreciation – Vietnam, Indonesia, India and Pakistan – have high interest rates. The foreign exchange risk seems to have been “converted” into interest rate risk.

Hong Kong and Japan are able to escape this trend mainly because of their mature and stable credit markets. The bulk of Japan government debt, for instance, is not with foreign lenders but with Japanese nationals, so foreign currency risk from public debt is significantly reduced or limited.

The challenge for the Philippine economy is to limit those government-generated risks like persistent budget deficits and ever-rising public debt, and government business bureaucracies that limit and sometimes scare investment and entrepreneurship in some sectors of the economy.

As economic uncertainty in the US and Europe linger, many businesses and entrepreneurs there are looking for alternative economies where they can jump ship. The rise in stock market investments is a good indicator for the Philippines but that is insufficient given the high degree of poverty and unemployment in the country. This is despite the argument I made in an earlier column that some unemployment is voluntary and indicates “joblessness by choice” due to a high “reservation wage” among job seekers.

As economic optimism outpaces pessimism, the unemployment condition may not necessarily decline as more people raise their “reservation wage” in anticipation of better economic and business opportunities to come. What is important is that economic growth should remain high; the economic pie should continue to expand fast. Government policies that tend to discourage more entrepreneurship should be drastically cut or eliminated.