In a fb group, Government and Taxes, Freedom andResponsibility, I had a debate with Troy ZD last February 5 this year. He posted this news report from the Inquirer, http://business.inquirer.net/163008/meralco-admits-telling-therma-mobile-to-sell-at-p62kwh-at-spot-market#ixzz2sPIrwxBR 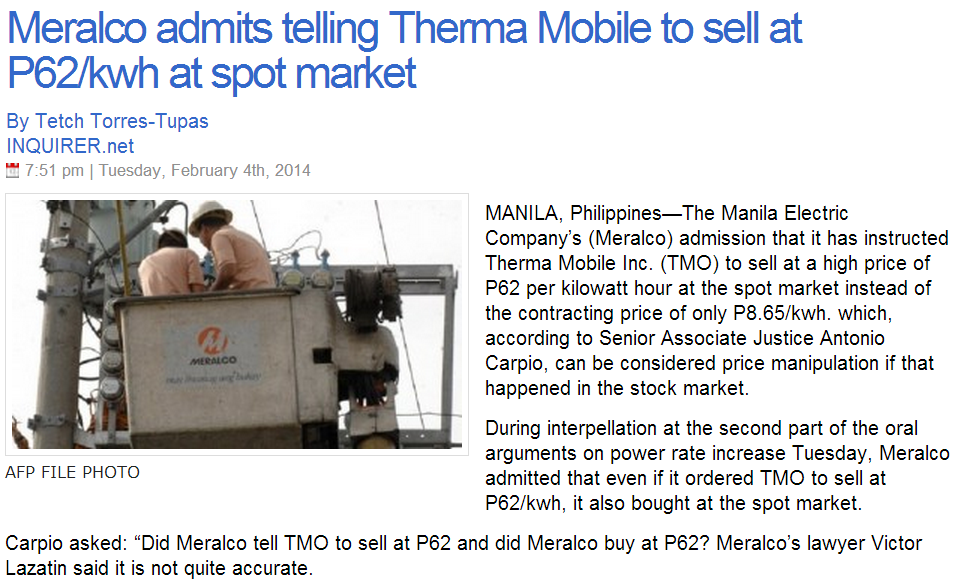 If this and other admissions by Meralco, the ERC etc are not an evidence of collusion that would make the SC strike down the price increase and to force the re-evaluation of EPIRA and particularly the WESM then the SC has sold us out.

I replied that an electricity distribution utility (DU) like Meralco, Batangas Electric Coop, Cagayan Electric Coop, etc., distributes electricity from two sources: (a) from bilateral contracts for its basic, non-peak electricity demand, and (b) from WESM or spot market for its peak demand period (say 5-7am, 6-8pm). In the case of Meralco-TMO bilateral contract, the contract price was P6.20/kwh in Oct 2013 and P8.65/kwh in Nov. 2013. See Table 3, Government and Taxes: Fat Free Econ 51: Ten Things About the Meralco Rate Hike

It is possible that Meralco told TMO and other diesel plants to bid at P62 so that not a single DU, Meralco included, would buy at that max price so that the clearing price would be at a lower amount.

The term "collusion" has been over-used and may be even abused. Who colluded? Meralco and TMO? Meralco and who else? At what volume (in GWH) at what price and when did the collusion happen?

Could it be that a DU bought from a generating company (GenCo) at the max bid price of P62/kwh but only for 2 or 3 GWH volume? If this is the case, can this still be considered as collusion considering the very small volume of electricity involved?

I will be very glad to see explicit answers from those who endlessly suggest there was collusion, like Troy, Bayan Muna, other groups and individuals.

Can you beat that? People have been using that term “collusion” since 3 months ago, and until now there is zero proof of collusion? Puro allegation and ngaw ngaw lang? Hoping that endless allegation becomes an accepted "truth"?

If people are honest, they should shut their mouth from endless accusations because they have zero proof. If they are dishonest, they will retain the accusation even if proof is zero.

Troy posted this  quote, no source given:

the assertions from both Meralco and TMO that only 100 MW of capacity have been provided are quite odd. At the beginning of June, Aboitiz Power announced it had completed the rehabilitation of the four power barges, and that they were fully operational at their 242-MW rating. Even as early as September, 2012 TMO informed the ERC that rehabilitation of two of the units had been completed. The claim that only 100 MW has been provided so far (100 MW is, coincidentally, roughly the effective net capacity of the two smallest barges, rated at 57 MW and 52 MW, respectively) begs the question whether the TMO facility may have been another of those supposedly “unplanned” plant outages that forced Meralco to buy higher-priced power from the spot market.

Malaya 1 has been on technical shutdown since July 2013. Even if one DU will beg at P100 or P200/kwh, that plant will never be able to produce electricity. Malaya 2 has been on scheduled maintenance shutdown since late October 2013. See chart 4, http://funwithgovernment.blogspot.com/.../fat-free-econ...

And even assuming that NPC or PSALM (whoever operates Malaya power plant) could produce magic last November and make it run, its generation cost that will be passed to consumers would be something that will make the activists curse and howl. It is an inefficient, costly government power plant that can save us more money if it is not running than it is operating.

People were so hooked on their conspiracy theory. Even if a power plant is 100% incapable of producing electricity, they will say that there is magic somewhere (by Batman? Superman? Spiderman?...) to make it run and save us from the Meralco-TMO-other GenCos collusion conspiracy theory.

I think this is a good explanation why a DU like Meralco with an existing contract to a GenCo like TMO told the latter to bid at the max rate of P62/kwh -- because it does not intend to buy significant volume at that price on non-peak hours. It turnedout that Meralco did buy from TMO at P62 -- at a monster volume of 0.5 kwh! Total purchase of Meralco from WESM in Nov 2013 was 286,000,000 kwh, 0.5 kwh of which was purchased at a "collusion" price of P62/kwh. Nice joke on collusion.
http://www.interaksyon.com/article/80150/power-rate-hike--justices-say-root-of-problem-lies-with-must-offer-rule-regulators 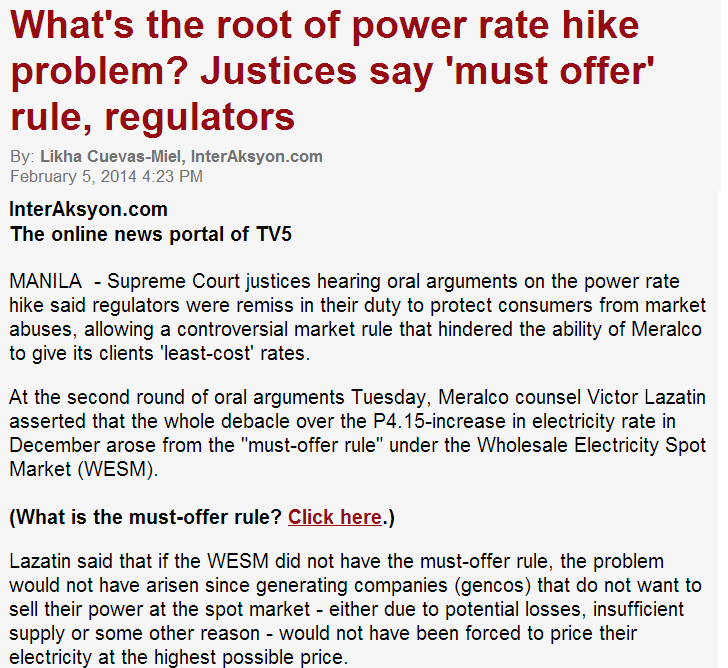 There are at least two lessons here. (1) Remove the "must offer" rule for all GenCos. If they do not want to be dispatched at particular hours because its power supply is already fully contracted, or it wants to do emergency repair on a minor mechanical problem that can become a big problem if not acted upon, then ERC should not compel them to offer.

Or (2) Retain the "must offer" rule but remove the P62/kwh max bid price. Make it indefinite. So that a GenCo that does not want to be dispatched for a particular hour can price its power at P1,000/kwh or P5,000 or higher, precisely so that NO ONE will buy from it. 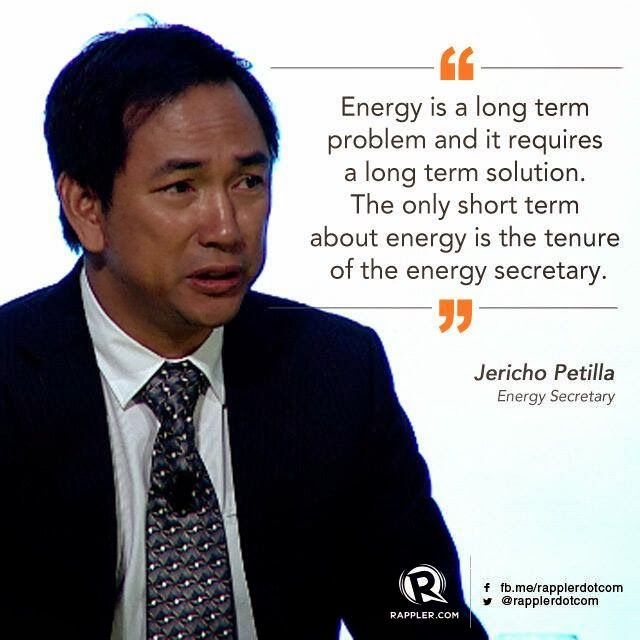 Nice quote. People will always think the problem is with electricity distribution and the monopoly DUs, when the clear problem facing them is the lack of power generation.

Government is a major contributor to high electricity prices in this country. Aside from VAT and other taxes, it also slaps various mandatory fees under "universal charges."

Malaya power plant can greatly help in this power rate hike debate if it is privatized soon, two benefits: (a) money from privatization proceeds be used to pay back some of the stranded cost so that universal charges will decline. And (b) private operator can make it run more efficiently, more frequently, add to more power supply, while paying taxes to the government. A seldom-operating, government-owned Malaya plant is a costly elephant that adds to more costs than benefits to electricity consumers.