Investments and job creation is not a crime that must be restricted by governments. The Philippine Constitution, ratified in 1987 or 27 years ago, is nice except that it explicitly limits or bars foreigners from owning certain assets and businesses in the country. Some sectors are limited to either 40 percent maximum equity ownership by foreign investors, some are outright off-limits to foreign investors. 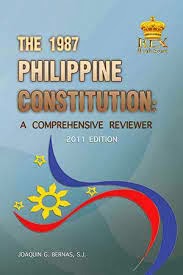 I believe that the PH constitution needs to be revised and amended. In addition, I wish to see a Constitution that is 10 pages max. Very few details, mostly motherhood statements. All details -- like the minimum age for a candidate to run for Congressman/woman, for Senator, for President; what sectors to be reserved only for Filipinos, etc. -- should be done via legislation. That way, there is no need to clamor for frequent changes in the charter. People can lobby for new legislation or amend an old law without affecting the entire constitution.

Below is one statement calling for charter change.
--------

CHACHA NOW!
STATEMENT BY THE FOUNDATION FOR ECONOMIC FREEDOM

We, the Foundation for Economic Freedom, support the move by Speaker Feliciano Belmonte Jr. to amend the economic provisions of the Constitution to include the phrase “unless provided by law” to the foreign ownership restrictions in the Constitution in public utilities, land, mass media and advertising, educational institutions, and development  of natural resources.

We believe that vesting on Congress, rather than the Constitution, the power to determine the restrictions in foreign ownership will send a strong signal to foreign investors that the government will level the playing field by opening up the economy as conditions permit.

We believe that opening up the economy to foreign investors is necessary to increase  Foreign Direct Investments (FDI) in the country, which remain one of the lowest in the ASEAN.

Poverty and hunger levels have remained unchanged despite the country’s 7.2% economic growth.  To attain “inclusive growth,” the country must boost investments by liberalizing foreign ownership  rules in order to generate employment and reduce poverty.

The country also risks being left out of the Trans-Pacific Partnership (TPP), an economic grouping of nations intended to boost trade and investments among member countries, if it does not amend the restrictive provisions in the Constitution and give foreign investors equal treatment as local investors.

While the Constitutional amendment will not immediately liberalize the economy, it will provide an evolutionary path to making the necessary changes as needed.  The Belmonte proposal represents a practical political solution that provides the “key” to opening up the economy.

We urge President Aquino to reconsider his stand about not amending the Constitution and allow Congress to pass the Belmonte bill in time for a national referendum in 2016.  The millions of poor and unemployed are looking up to his government to live up to his promise of inclusive growth.
Posted by Bienvenido Oplas Jr at 5:25 AM