Thailand Politics and the Monarchy, Part 3

A friend, Dr. Amado "Bong" Mendoza, Prof. of UP Political Science, wrote a brief but good analysis of the Thai political crisis. He gave me permission to post it here; photo from his fb wall. My comments below his article.
-------- 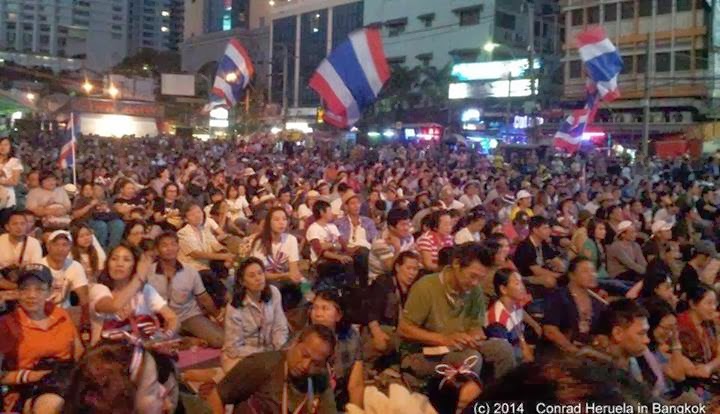 While we had delightful face-offs in Manila's Chinatown, there are dangerous ones going on in Bangkok.

Yingluck's parliamentary majority rammed through an amnesty bill that, among others, would allow Yingluck's older brother, former prime minister Thaksin Shinawatra to go home from exile in Dubai.

The proverbial straw that breaks a camel's behind!

Elections in democracies are supposed to settle rivalries between political factions; that is, decide which camp will lead a nation. However, these elections may not be able to accomplish that due to several complications.

The opposition's strategic objective: the ouster of the "Thaksin regime"

Opposition tactics: blocking of major Bangkok intersections; occupation and paralysis of government ministry buildings; calls for Yingluck's resignation; calls for take-over by a reform council before elections are held; election boycott; blocking of candidate registration--all resulting in failure of elections and failure to constitute parliament and a government.

This latest crisis is part of the continuing struggle roughly between pro-Thaksin and anti-Thaksin forces. Said contest started in 2006 when then prime minister Thaksin was ousted by a royally-endorsed coup. A few decidedly inept military men (including one, General Samak, who cannot decide what his job was: general, prime minister, or television cooking show host?) were at the helm until a civilian politician from the Democrat Party took over.

Thaksin fled the country in 2008 to avoid cases filed against him in court.

However, he retains strong support and loyal Red-shirts clashed with pro-government Yellow-shirts in 2010.

In 2011, the rival political factions arrived at a modus vivendi upon the election of the Pheu Thai government led by Prime Minister Yingluck Shinawatra. Eventually, the peace was roiled by the railroaded amnesty bill.

Thus in Thailand, we have minorities who try to impose their wills. We have majorities abusing their numbers. King Bhumibol, who had influentially shaped the course of Thai politics for several decades, is old and sickly. The military top brass can mount another coup. Question is how long can the generals man the household before the civilians assume power once more.

The eventual death of Bhumibol will be a game changer. His heir apparent is a wastrel. The Crown Princess is respected but she has to hurdle the gender bias before she could be named head of state and monarch of Thailand.

Bhumibol is also a very tough act to follow. The 1932 Revolution may have ended absolute monarchy in Thailand. In the early years of his reign, during the government of a military dictator, Bhumibol may have had little power and was no more than a ceremonial figure. However, military rivals for leadership begun to seek his blessings.

The English academic Duncan McCargo have noted the active political involvement of Bhumibol through a "network monarchy" working through the Privy Council. The network's political cachet was supposedly threatened by the rise of Thaksin. The network's capacity to exercise power is based partly on Bhumibol's popularity and strict control of his image.

Bhumibol's power is largely based on mystique. He is reputed to do things. We will never know how these are done since he works behind the scenes.

The Thaksin camp has its set of sins and corruption, so does the anti-Thaksin camps, from the monarchy to the traditional Bangkok-based political elites. The problem of the anti-Thaksin camps is they can NOT win any election. Since 2006 ouster of Thaksin, all four elections including the last 2011 elections were won by the Thaksin camp. That is why the opposition including the Democratic Party, campaigned for mob rule, bring down the Yingluck Shinawatra government without elections, and their unelected "People's Council" will rule for two years without election.

Mob rule, no respect for the rule of law, the Thai constitution. The problem with mob rule policy is that assuming they succeed in bringing down the Yingluck government without election, the next months, if the Thaksin camp can also mobilize millions of supporters, there will be another round of paralyzing rallies and change of government. Mob rule is ugly and not advisable.

On the monarchy. Its "holiness" should be damaged by now among many rural residents who are mostly pro-Thaksin. The monarchy and Thaksin are both populists, giving away various subsidies and freebies to buy political support, bloating the Thai public debt. But it seems that Thaksin was the better populist than the monarchy, his family and business cronies.

Not that I am pro-Thaksin and his corruption and populism. I am for the rule of law, in Thailand and elsewhere. If a government is corrupt, then bring it down and change it via constitutional processes like elections or impeachment or similar schemes. Mob rule is rule of men and the opposite of rule of law.

Preventing other people to vote, and still call themselves as democrats, people's representatives? They are mini-dictators who are not in power yet, and they want to be in power sooo bad. BANGKOK - Opposition protesters prevented voting at thousands of polling stations in Thailand on Sunday, triggering angry scenes in the capital over an election that plunged the strife-racked kingdom into political limbo.

Despite weeks of mass street demonstrations aimed at forcing her from office, Prime Minister Yingluck Shinawatra was widely expected to extend her billionaire family's decade-long winning streak at the ballot box.

But the disruption to voting means that the results are not expected for weeks at least, and there will not be enough MPs to convene parliament and appoint a government until new elections are held in the problem areas….
-----------

Posted by Bienvenido Oplas Jr at 11:09 AM