taxes, or absence of tax on certain transactions, attracted more businesses, which created more jobs. Businesses bidding up for more workers, so wages keep rising even if HK has no minimum wage law for many decades then.
----------- 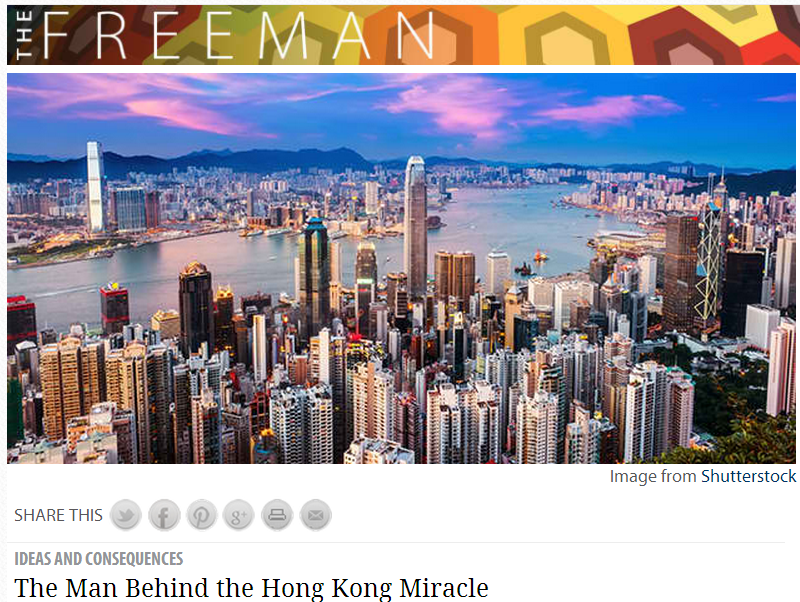 The Man Behind the Hong Kong Miracle
FEBRUARY 10, 2014 by LAWRENCE W. REED

Three cheers for Hong Kong, that tiny chunk of Southeast Asian rock. For the twentieth consecutive year, the Index of Economic Freedom—compiled by The Wall Street Journal and the Heritage Foundation—ranks Hong Kong (HK) as the freest economy in the world.

Though part of mainland China since the British ceded it in 1997, HK is governed locally on a daily basis. So far, the Chinese have remained reasonably faithful to their promise to leave the HK economy alone. What makes it so free is music to the ears of everyone who loves liberty:  Relatively little corruption. An efficient and independent judiciary. Respect for the rule of law and property rights. An uncomplicated tax system with low rates on both individuals and business and an overall tax burden that’s a mere 14 percent of GDP (half the U.S. rate). No taxes on capital gains or interest income or even on earnings from outside of HK. No sales tax or VAT either. A very light regulatory touch. No government budget deficit and almost nonexistent public debt. Oh, and don’t forget its average tariff rate of near zero. That’s right—zero!

This latest ranking in the WSJ/Heritage report confirms what Canada’s Fraser Institute found in its latest Economic Freedom of the World Index, which also ranked HK as the world’s freest. The World Bank rates the “ease of doing business” in HK as just about the best on the planet.

To say that an economy is “the freest” is to say that it’s “the most capitalist.” Capitalism is what happens when you leave peaceful people alone. It doesn’t require some elaborate and artificial, Rube Goldberg contrivance cooked up by tenured central planners in their insular ivory towers. But if we are to believe the critics of capitalism, HK must also be a veritable Hell’s Kitchen of greed, poverty, exploitation and despair.

Not so. Not even close.

Maybe this is why socialists don’t like to talk about Hong Kong: It’s not only the freest economy, it’s also one of the richest. Its per capita income, at 264 percent of the world’s average, has more than doubled in the past 15 years. People don’t flee from HK; they flock to it. At the close of World War II, the population numbered 750,000. Today it’s nearly ten times that, at 7.1 million.

The news that the HK economy is once again rated the world’s freest is an occasion to celebrate the one man most responsible for this perennial achievement. The name of Sir John James Cowperthwaite (1915–2006) should forever occupy top shelf in the pantheon of great libertarians. Some of us just write about libertarian ideas. This guy actually made them public policy for millions of citizens….

… He served in the British Colonial Administrative Service in HK during the early 1940s. After the war he was asked to come up with plans for the government to boost economic growth. To his credit, he had his eyes open and noticed that the economy was already recovering quite nicely without government direction. So while the mother country lurched in a socialist direction at home under Clement Attlee, Cowperthwaite became an advocate of what he called “positive non-interventionism” in HK. Later as the colony’s Financial Secretary from 1961 to 1971, he personally administered it.

“Over a wide field of our economy it is still the better course to rely on the nineteenth century's ‘hidden hand’ than to thrust clumsy bureaucratic fingers into its sensitive mechanism,” Cowperthwaite declared in 1962. “In particular, we cannot afford to damage its mainspring, freedom of competitive enterprise.” He didn’t like protectionism or subsidies even for new, so-called “infant” industries: “An infant industry, if coddled, tends to remain an infant industry and never grows up or expands.” He believed firmly that “in the long run, the aggregate of the decisions of individual businessmen, exercising individual judgment in a free economy, even if often mistaken, is likely to do less harm than the centralized decisions of a Government; and certainly the harm is likely to be counteracted faster.”

… Statistics, no matter how accurate or voluminous, are no substitute for sound principles. Powered by an abundance of the latter under Cowperthwaite, the HK economy soared during his tenure.  Writing in the November 2008 issue of The Freeman, Andrew P. Morriss noted that in his decade as financial secretary, “real wages rose by 50 percent and the portion of the population in acute poverty fell from 50 to 15 percent.” It’s hard to argue with success. After Cowperthwaite’s retirement in 1971, less principled successors dabbled in social welfare spending but they financed it through land sales, not increased taxation. Tax rates to this day are right where the old man left them.
------------