Yesterday, I attended a pre-summit consultation meeting by the DTI on free trade agreements (FTAs). It was part of the preparation for the "Manufacturing Summit 2016" this coming November 28-29, 2016 at Shangrila Makati. Small group with representatives from selected sectors in the PH economy like the garments and textiles, pharma (represented by Unilab), other manufacturers and government agencies. I was lucky to be among the invitees. Thanks to DTI Asec Fita Aldaba for the invite.

Former NEDA Secretary Ciel Habito gave the preliminary inputs based on their research at the USAID-funded Trade-Related Assistance for Development (TRADE) Project. This chart is from his presentation, and it is a very useful one for me. 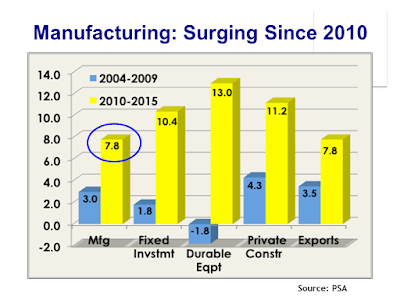 I posted that chart in my fb wall with a note that there are at least two ways to interpret this chart, growth rate of PH manufacturing output, average for 2010-2015 vs 2004-2009 average. One interpretation on trade and economics, the other on politics.

(1) Economics: PH manufacturing surged at average growth rate of 7.8% per year vs. only 3% in 2004-2009. With the ASEAN FTA (AFTA), PH import tariff rates went down to 0 - 5% by 2010. So the chart demolishes the hypothesis that “free trade kills local industries”. The opposite happened, that as the economy turns to freer trade, tariff down to zero, the manufacturing and exports sectors become more dynamic, stronger, and more competitive.

The anti-Aquino groups and people will be unhappy to see this chart.

should be a line plot over time to show trends," and bad graph use can be used to lie."

Well I ignored his attacks of that chart because he cannot produce an alternative chart or graph based on actual numbers, basta bira lang ng bira.

Another chart from Dr. Habito's presentation. Big change in the composition and value of PH exports to TH, 2003 vs 2013. TH is more developed than PH in exports and manufacturing and still, PH was selling modern exports like optical and medical apparatus. 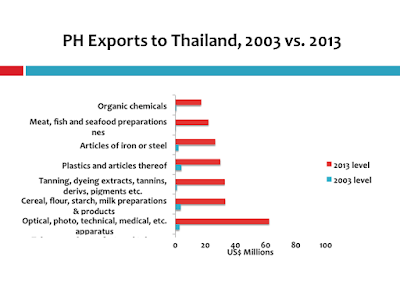 The PH exported around $200 M of boilers, nuke reactors, machineries, optical, technical, medical apparatus, etc to ID in 2013 alone. As we move to freer trade, to zero tariff, our manufacturing and exports capacity do not die; the reverse happens, they become more dynamic, more competitive, more job creating and more forex-earning. 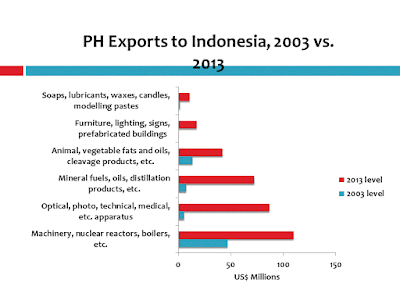 After Ciel's presentation, open forum. I commented the following.

2. Our main advocacy in MGT and SEANET is real free trade, unilateral trade liberalization both in tariff and non-tariff measures (NTMs) and also in services.

3. Some factors that deter more investments in manufacturing in the country are outside the scope of DTI, like expensive and unstable electricity supply, slow internet.

5. NTMs as indirect barriers to trade should be relaxed and ultimately abolished. both by the PH and its trade partners.

6. The main purpose of trade policy should be consumer protection, to allow the consumers to have more choices in buying and selling, to have more access to more markets and economies from abroad.
-------------