Anthropogenic or "man-made" climate change (CC) hypothesis is actually 5% climate science and 95% political science. A realistic view is that CC is natural (ie, 'nature-made') and cyclical (warming-cooling-warming-cooling...). So a change in political leadership of one of the major players will significantly increase the % share of real climate science and reduce the share of political science.

Some big news reports a day after Donald Trump was elected as the next US President.

"While vowing to “cancel” the international Paris climate accord Obama championed, Trump would also rearrange domestic energy and environmental priorities. He wants to open up federal lands to oil and gas drilling and coal mining. He wants to eliminate regulations he calls needless. He would scrap proposed regulations for tighter methane controls on domestic drillers. And he wants to shrink the role of the Environmental Protection Agency to a mostly advisory one and pull back the Clean Power Plan, Obama’s proposed plan to push utilities toward lower carbon emissions." https://www.washingtonpost.com/.../trump-victory.../

The world’s biggest maker of wind turbines fell as much as 14 percent and traded 6.6 percent lower at 440.10 kroner as of 12:50 p.m. in Copenhagen. Stock of the Danish company already lost ground last week after U.S. polls tightened, bringing this year’s declines to about 10 percent." http://www.bloomberg.com/.../vestas-sinks-as-trump...

"On climate change, abandoning the Paris Treaty would be primarily of symbolic importance, since implementation has always been the biggest obstacle. China’s announcement of a 19% increase in coal capacity over the next five years demonstrates just how little committed many of the signers are. Possibly, President Trump will try to reduce federal support for renewables, but since that would cause the loss of many jobs and Congress has already extended the Production Tax Credit for five years, it’s not clear that much will be done, or at least not very quickly." http://www.forbes.com/.../what-will-president-trump.../... 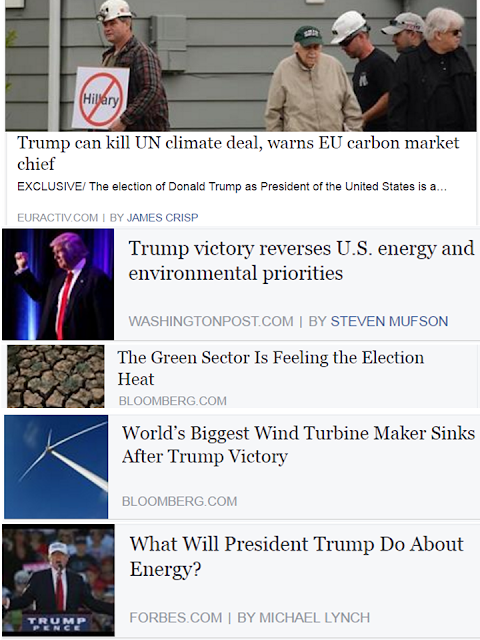 2. Termination, on environmental and humanitarian grounds, of all Federal Government payments to foreign entities in connection with climate change... https://wattsupwiththat.com/.../in-light-of-recent.../

"Many years ago, Lord Monckton predicted America would be nation to lead the world to freedom from the anti-humanist greed of the green movement. Lord Monckton’s prediction has now come to pass.

In my native Australia, in Europe, across the world, in the bleak halls of the United Nations, the climate elite were gathering for one final great push to claim the future. Their plans are now in ruins." https://wattsupwiththat.com/.../09/the-end-of-the-green-age/

From Marc Morano: “Climate sanity has been restored to the U.S. No longer do we have to hear otherwise intelligent people in charge in DC blather on about how UN treaties or EPA regulations will control the Earth’s temperature or storminess." http://www.climatedepot.com/.../trump-wins-u-s.../

"The US president-elect "cannot prevent the implementation" of the landmark Paris pact, inked in the French capital last December, said Segolene Royal, France's environment minister and outgoing head of the UN climate forum.

"As I speak, 103 countries representing 70 percent of (greenhouse gas) emissions have ratified it, and he cannot -- contrary to his assertions -- undo the Paris Agreement," she told French radio station RTL." https://www.yahoo.com/.../climate-diplomats-push-back...

Their big problem is that hundreds of those "planet saviours" from developing countries, NGOs, etc were paid for by US taxpayers, courtesy of Pres. Obama's embrace of climate alarmism movement.

"Paris accord in limbo?
As for the Paris Climate Agreement, Trump can either ignore it or withdraw from further climate talks. Since Obama bypassed congress by calling it an accord—a treaty requires approval by the Senate—Trump could repeal the executive order Obama used to implement the agreement." http://us.blastingnews.com/.../here-s-what-a-trump... 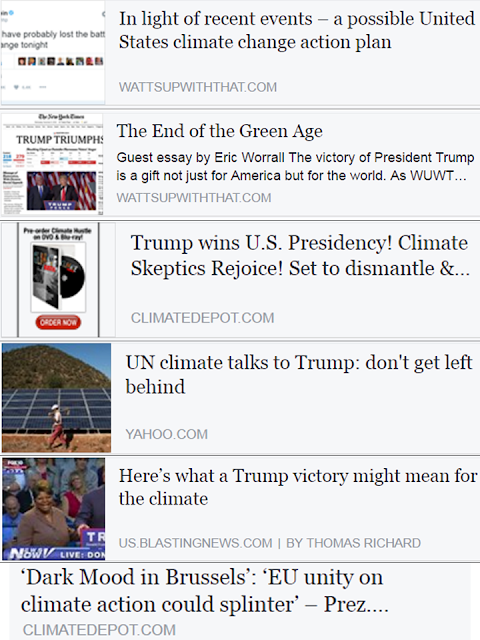 "The bigger concerns, climate researchers, strategists and activists say, is if Trump prevents the U.S. from meeting its target of reducing its greenhouse gas emissions or keeps the country from taking more ambitious climate action. The U.S. has promised to reduce emissions 26-28 percent by 2025 compared to 2005 levels, a goal many say may be within reach simply based on the market forces already pushing out older coal plants in favor of natural gas." https://insideclimatenews.org/.../marrakech-morocco...

"SEVENTH, cancel billions in payments to U.N. climate change programs and use the money to fix America's water and environmental infrastructure."
http://www.npr.org/.../here-is-what-donald-trump-wants-to...

"Seven actions to protect American workers:
....
★ FIFTH, I will lift the restrictions on the production of $50 trillion dollars’ worth of job-producing American energy reserves, including shale, oil, natural gas and clean coal.

★ SEVENTH, cancel billions in payments to U.N. climate change programs and use the money to fi x America’s water and environmental infrastructure."
https://assets.donaldjtrump.com/_landings/contract/O-TRU-102316-Contractv02.pdf 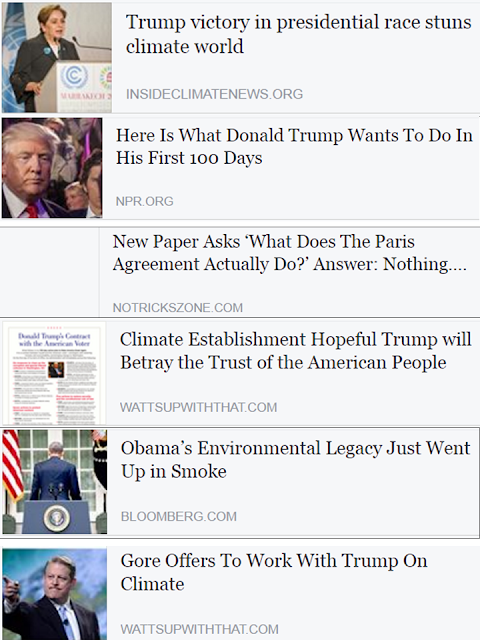 The climate alarmism movement with the goal of more UN, more government, more carbon taxation, more renewables cronyism, more and endless global climate junkets, more climate loans, would be reeling now because the "party might be over soon."