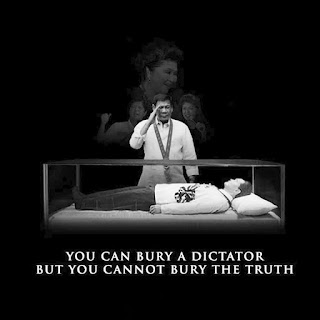 Noontime today, former dictator and President of the Philippines for 20 years (1965 to late February 1986), Ferdinand Marcos was hurriedly and secretly buried at the Libingan ng mga Bayani (LnmB, Cemetery for Heroes). Air Force choppers were used to transport the coffin, etc. and flew straight from Ilocos to LnmB.

Good points from Bernard Ong. The photos and memes I just added here, taken from the web and fb.

"THIS IS SQUARELY ON DUTERTE

Duterte said: "Hopefully, both sides will... come to terms with the burial of former President Ferdinand Marcos.” He pretends to be above the fray and washes his hands off his lead role in Marcos restoration. 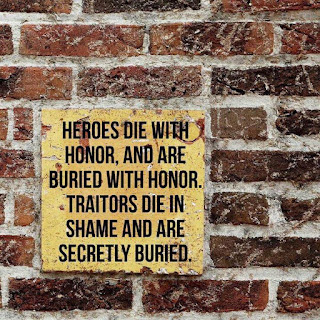 He took money from the Marcos family - money stolen from the Filipino people - for his election campaign. He hid this fact during the election & did not even declare it in his SOCE (statement of campaign expenditures).

Heroes' burial was half of his repayment. The other half – BongBong Marcos as VP (prelude to full Marcos restoration when he becomes president) – is still unfulfilled.

Marcos caused immense misery on so many people – killings, looting scarce resources intended for social services, causing economic hardship. Duterte is smart enough to know his history but chooses to play dumb with arguments like ‘ He was only charged in civil court, he has never been convicted of any crime’. 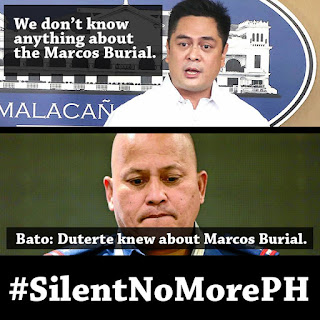 The mindset ‘Not guilty if you’re smart enough to escape conviction’ might as well apply to Duterte himself – 1000+ Davao Death Squad killings, 4000+ EJKs in Drug War, alleged wealth stashed in deposits shielded by Bank Secrecy Law.

Don’t be deceived by Duterte’s talk of “both sides”. He is firmly on one side – on the side of the dictator who killed, plundered and inflicted hardship on an entire nation. Marcos was a liar, a tyrant, a mass murderer and a thief. Duterte wants to be like him."

This afternoon, there have been plenty of protests and citizens mobilization protesting the treacherous and secretive burial for the late dictator. 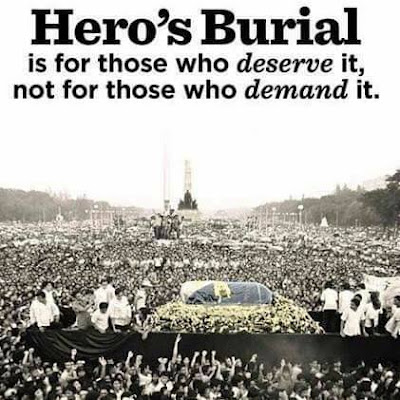 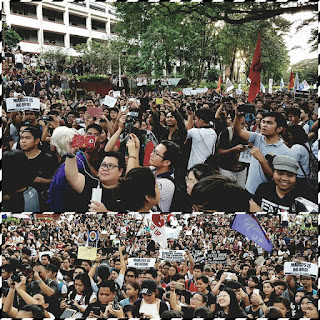 At my alma mater, UP Diliman this afternoon. There were also huge student protests at Ateneo de Manila, UP Manila, St. Scholastica, other universities.


Imee Marcos and family said it was a "private burial." No, they are lying. It was a government-sponsored, taxpayers-funded burial. 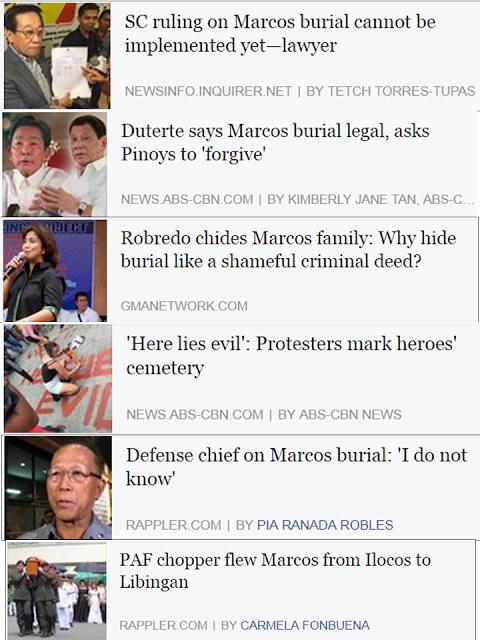 Karma for the 9 SC justices who supported the Marcos burial. Now the SC as an institution was slapped in the face by the AFP, PNP, Du30 and the Marcos family. Magsama-sama sila sa pagka walanghiya.