Spencer, Watts, Gosselin and Bastardi on Clinton vs. Trump, Elections 2016

I am non-partisan in the US elections, past and present. This election is the most divisive perhaps, so I check what some Americans that I highly respect say about the polls. Here are four American scientists and engineer who write on climate and energy issues, comments/ideas were all posted November 04, 2016.

Even some of my favorite conservative commentators don't yet understand that this election is not about Democrats versus Republicans...

It’s about We The People versus the government that has sworn to protect and serve us.

You might be sick of the politics and divisiveness. I am too. But if you care about preserving our liberties and way of life, I encourage you to get educated on the issues – examining BOTH sides – and get out and vote next Tuesday. Over 1 million of our citizens have died in wars to preserve our liberties, and I believe it’s the least we can do to honor their sacrifice.

Career politicians are now put on notice that We The People are tired of corruption, lawlessness, pay-for-play, and above all a national debt that is now so large (approaching $20 Trillion) it might well turn our country into a Third World nation (look into what happened to Argentina in 2001).

It’s unfortunate that the mainstream media have become willing accomplices to business as usual in DC, and now even the Department of Justice has become compromised.

Most Republicans did not want Trump to be their nominee, because he threatens business-as-usual in Washington. But We The People spoke, and Trump did the impossible, beating out career politicians, including my favored candidate.

Yes, Trump is crass, egotistical, narcissistic (what politician seeking the presidency isn’t?) and maybe the kind of guy you wouldn’t necessarily want dating your daughter. I get that.

But the Democrat-AND-Republican establishment is destroying our country. You might not feel it yet in your life…the Argentinians didn’t either…until it was too late. Their government spending became unsustainable, and their economy finally imploded. After 15 years of lawlessness and poverty, they are just beginning to recover.

Don’t think it can’t happen to America. I remember when the Soviet Union also seemed invincible.

We are now seeing evidence of rampant corruption in DC coming to light in the news, and I will guarantee you in the next year or so it will make Watergate look like Nixon stole a piece of candy from the candy store.

Trump has promised some things that will help reign in government, and strengthen our economy. A few other things he has proposed might well be detrimental, I don’t know.

But I have no question that Trump is interested in a strong America, and he will surround himself with knowledgeable advisors. I know a couple of them. Whether he succeeds or not remains to be seen.

You might consider Trump just the lesser of two evils. Fine, I get that, too.

But we have to start limiting and repairing the damage that business-as-usual has caused in DC. And since Trump is not part of the political establishment, and likely owes few if any political favors, I believe he represents our best hope of getting the country back on track.

May God help us in the coming days

All I can tell you is that Trump is very serious about reducing the negative effect of excessive government regulation on the private sector. No question the EPA is out of control as it is currently operated. It was never intended to be doing what it has been doing in recent years.

Shit is about to hit the fan in Hillary corruption scandal. Tidbits as we know them now from the FBI investigation. Via FoxNews

1. The Clinton Foundation investigation is far more expansive than anybody has reported so far and has been going on for more than a year.

2. The laptops of Clinton aides Cherryl Mills and Heather Samuelson have not been destroyed, and agents are currently combing through them. The investigation has interviewed several people twice, and plans to interview some for a third time.

3. Agents have found emails believed to have originated on Hillary Clinton's secret server on Anthony Weiner's laptop. They say the emails are not duplicates and could potentially be classified in nature.

4. Sources within the FBI have told him that an indictment is "likely" in the case of pay-for-play at the Clinton Foundation, "barring some obstruction in some way" from the Justice Department.

5. FBI sources say with 99% accuracy that Hillary Clinton's server has been hacked by at least five foreign intelligence agencies, and that information had been taken from it. 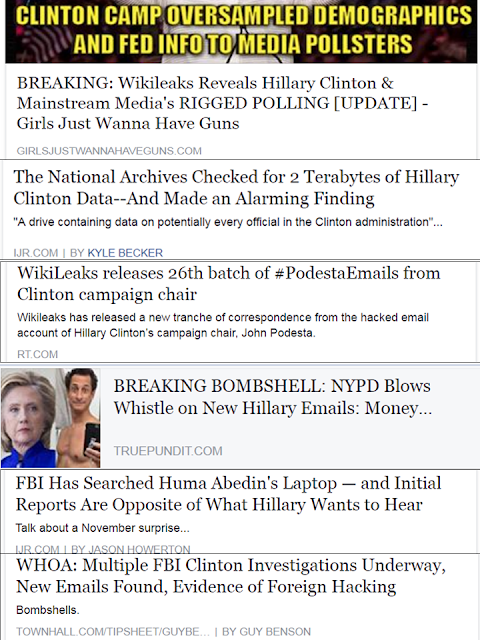 Those fearing constitutional crisis if HRC elected need not fear. It won't matter, and once elected, she will skate.

No border,no culture,no common language,NO LAW=NO NATION.Electing HRC means electing RULER as electorate would approve someone above law.
Posted by Bienvenido Oplas Jr at 10:21 AM