During the BusinessWorld Virtual Economic Forum (BWVEF2022) last week (May 25-26), net-zero, decarbonization, and more renewable energy (RE) were discussed on Day 1. These concepts and aspirations are related to the new fad in finance — the environmental and social governance (ESG) scheme where more investments in RE and under-investments in fossil fuels are promoted.

ESG AND ITS IMPACT ON AGRICULTURE COMMODITIES

Among the ESG-related points made by some speakers at the BWVEF2022 were: 1.) Offshore wind power as part of climate solution, made by Torbjørn Kirkeby-Garstad of Scatec, 2.) more incentives for green buildings and net-zero, made by Raymond Rufino of NEO, and, 3.) small businesses have to be enabled to pursue net zero, made by Maria Yolanda Crisanto of Globe Telecom.

See also some recent articles on ESG in BusinessWorld:

3. “ESG’s emerging influence in PHL business” by Adrian Paul B. Conoza (May 23)

Fossil fuels (oil-gas-coal) give us energy for our cars, trucks, and tractors; reliable and dispatchable electricity for our homes, buildings, and factories. So, if there is underinvestment in fossil fuels, there will be less supply of these commodities in the future. Petroleum produces plenty of chemicals that are used in our everyday lives. These include nylon and polyester fabrics in our clothing. Handbags, sunglasses, phone cases, jewelry in our accessories. Cooking tools, appliances, cleaning products in our households. Fertilizers and insecticides in our agriculture. And many more.

Food inflation has become more visible in recent years. Crops need urea, ammonia, and other fertilizers to grow faster and produce more yield per hectare. Livestock need corn and other crops for feed. These commodities also need energy for harvest, transport, and storage — and energy prices have been rising fast since 2021.

I checked the peak prices of agricultural commodities and the price curve is getting steeper upwards. Wheat, palm oil (also canola), coffee, and US eggs showed a steep rise this year compared to last year and pre-pandemic 2019. Urea — used for fertilizers, feed supplement, and starting material for plastic manufacturing — experienced an almost 300% price increase compared to 2019. Salmon and other seafood experienced high prices this year mainly because of high demand while the supply of Russian seafood is curtailed by the economic sanctions (Table 1). 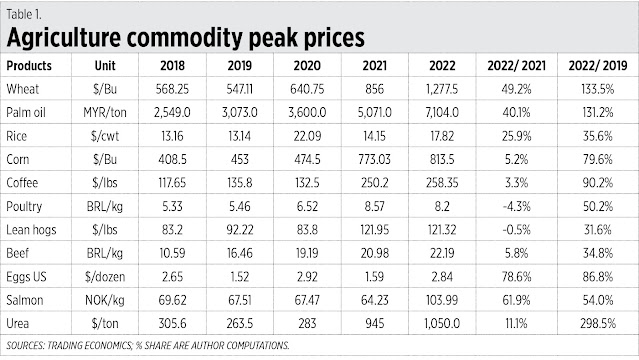 The price of urea ammonium nitrate (UAN) last Friday was €645/ton and it was 187.3% higher than a year ago. That is a huge increase in just one year.

So ESG schemes have a direct threat to global food production. Companies, banks, multilaterals, and government agencies should rethink their advocacy for ESG.

The “blackout during May 2022 elections” forecast by some climate alarmist groups pushing for more RE and ditching fossil fuel did not happen. On election day, May 9, power supply was at normal levels while demand was down and prices were low at P2-3/kwh. 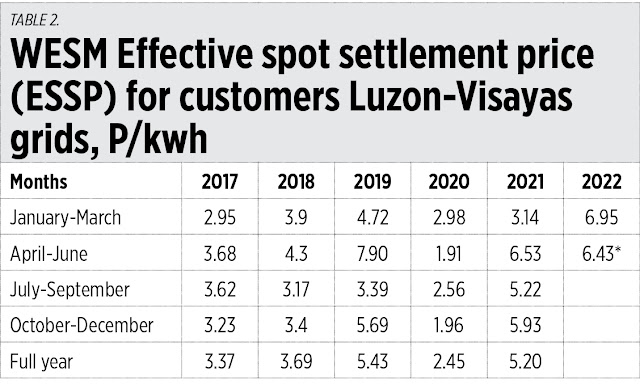 Incoming Finance Secretary Benjamin Diokno — former Department of Budget and Management (DBM) Secretary under the Estrada administration, and outgoing Bangko Sentral ng Pilipinas (BSP) Governor under the Duterte administration — has long experience in fiscal and monetary policy work. He was my teacher in Public Finance twice at the University of the Philippines School of Economics (UPSE), undergrad in the 1980s and PDE/graduate in the ’90s.

Incoming National Economic and Development Authority (NEDA) Secretary Arsenio Balisacan — the former NEDA Secretary under the PNoy administration, Philippine Competition Commission Commissioner under the Duterte administration — has long experience in socio-economic research and policy. He was also my teacher in Development Economics at the UPSE PDE program in the 1990s, the same semester as Sir Ben.

Incoming Trade Secretary Alfredo Pascual — former UP President, current Management Association of the Philippines (MAP) President — has long experience in corporate, academic, and multilateral agency work. He is not from UPSE, he graduated BS Chemistry then an MBA from UP.

Incoming BSP Governor Felipe Medalla — former NEDA Secretary under Estrada, and current BSP Monetary Board member since 2011 — has long experience in fiscal/taxation and monetary policy work. He was also a former Dean of UPSE but he was not my teacher.

There is no appointment yet for DBM Secretary but I hope he/she will not be a fan of heavy subsidies and more borrowing, and will prefer fiscal discipline and responsibility.

This happened because of the strict COVID-19 lockdowns of 2020-2021, when revenues significantly declined while expenditures continued to increase. While millions of people lost their businesses and jobs in the private sector, government personnel remained intact and their salaries, allowances and bonuses continued from national down to barangay levels. 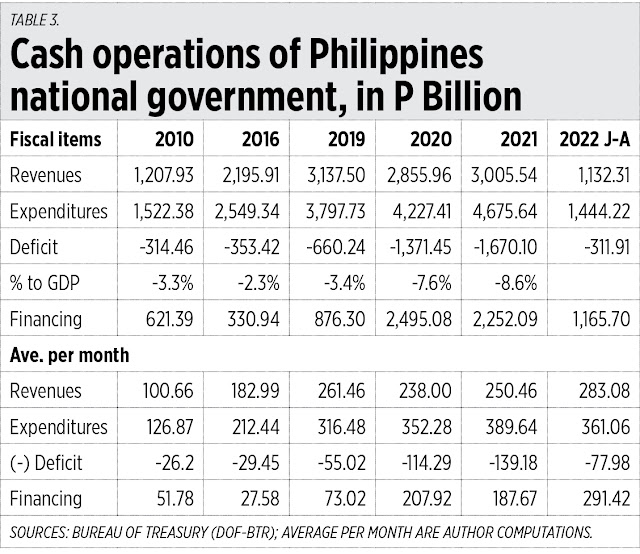 The good news is that Sir Ben is not inclined to raise taxes but rather focuses on better tax administration, collecting more revenues via a digital easier payment system. This will reduce corruption via person-to-person interaction between Bureau of Internal Revenue/Bureau of Customs personnel and taxpayers.

BBM and the economic team are not yet in the mood to do large-scale privatization or long-term leasing of government assets and corporations, but I hope they will consider this. Among the “low-hanging fruits” that are easier to privatize are the Philippine Amusement and Gaming Corporation, and the long-term leasing of the lands of state universities and colleges, and military and police camps. Revenues from privatization and long-term leases should be used exclusively to retire public debt, not earmarked for whatever agency or program.