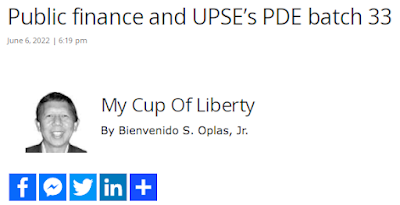 There are many elephants in the room when it comes to public spending, big issues and problems that people try to avoid discussing as they can cause discomfort to many other people. The article last week identified one — that while millions of people in the private sector lost their businesses and jobs during the lockdowns 2020-2021, the number of government personnel, from national down to barangay levels, stayed intact and their salaries, allowances, and bonuses continued to be given.

THREE ELEPHANTS IN THE ROOM

This piece will briefly discuss three other elephants in the room — the rising pensions of military and uniformed personnel (MUP), climate expenditures, and endless subsidies to government corporations.

From the Department of Budget and Management (DBM), Budget of Expenditures and Sources of Financing (BESF) 2022 report, the special purpose funds have trillions, with four of these comprising 38% to 41% of the annual total budget from 2020-2022 (Table 1). 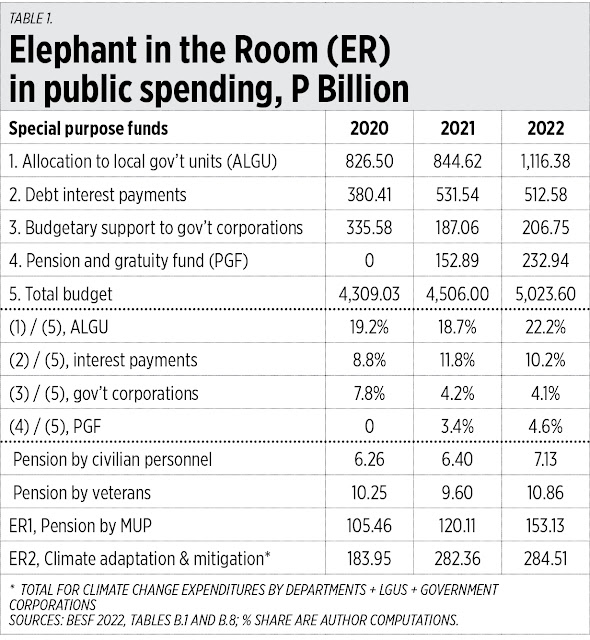 The first elephant in the room (ER) is the huge, monstrous pensions given to MUP — P153 billion this year or 21.5 times higher than the pensions of all civilian personnel combined (government teachers and doctors, engineers and agriculturists, diplomats, and so on).

The burden to taxpayers of MUP pensions is so huge that either it should be cut, or the MUP should also contribute a huge amount to the fund.

There is no “climate crisis” to justify huge climate spending from taxpayers and energy consumers.

The third ER is the bottomless subsidies to government corporations and financial institutions. These are supposed to be earning and not subsidies-dependent agencies. And many of them should be in the hands of the private sector, subject to competition, expansion, or bankruptcy. Like the SSS (Social Security System) that gets annual contributions from members then got P51 billion more from taxpayers in 2020 (Table 2). 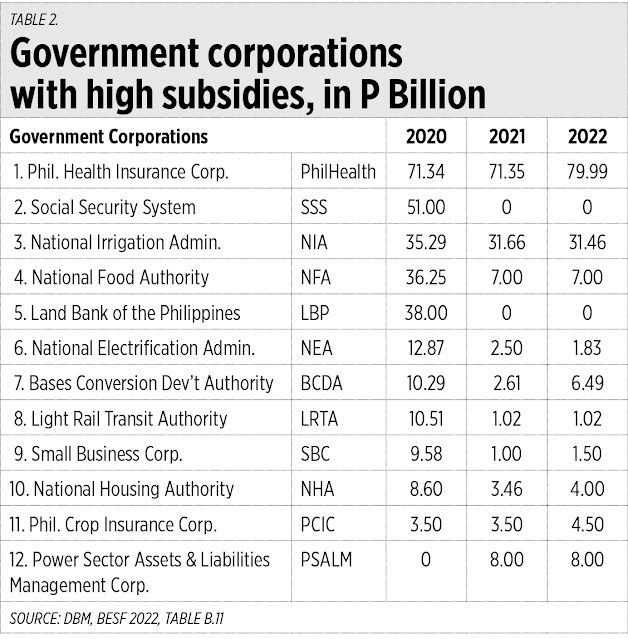 One way to reduce the public debt is to privatize many government corporations and spare the taxpayers from any tax hikes, or have tax cuts in commodities that are necessary for households and industries like energy products.

In the same column last week, I mentioned that incoming Finance Secretary Benjamin Diokno and returning National Economic and Development Authority (NEDA) Secretary Arsenio Balisacan were both my former teachers at the Program in Development Economics (PDE) of the UP School of Economics (UPSE) batch 33, school year 1997-1998. The Dean of the school at that time was former NEDA Secretary and incoming Bangko Sentral ng Pilipinas (BSP) Governor Felipe Medalla.

The PDE Director that time was Prof. Ruperto Alonzo (RIP), a very kind and warm teacher for 45 years who became UP Professor Emeritus, and was NEDA Undersecretary in 1998-2000 under the Estrada administration. He also became a godfather at my wedding.

PDE is a graduate program designed for mid-level government officers and junior technocrats, so the course content is applied economics with deep theoretical background. Many of my classmates have stayed in government and excelled in their fields. Among them are the following:

Maliz Guan-Aragon pursued law and is now the presiding judge in Magallanes, Sorsogon. Other classmates are working at the Department of Agriculture, the Bureau of Internal Revenue, and the Philippine Statistics Authority (PSA). Others have retired already — from the PSA, the Supreme Court, the Department of Education, and the Technical Education and Skills Development Authority (TESDA).

But the most prominent among us is Amenah “Mina” Pangandaman, the incoming Secretary of the Department of Budget and Management (DBM). Back then we would occasionally make fun of her because she was the youngest in our batch at 21 years old, a fresh graduate of BS Economics from Far Eastern University. She has a good sense of humor.

Working her way in government, she became the Chief-of-Staff (COS) of former Senate President Edgardo Angara, then COS to the Chairperson of the Senate Committee on Finance, Senator Loren Legarda.

Then she moved to DBM when Sir Ben Diokno was Secretary under the Duterte administration. Sir Ben promoted her to DBM Undersecretary, supervising the Department Liaison Office and Budget Technical Bureau.

When Sir Ben became BSP Governor, he brought Mina along and she became Assistant Governor for Strategic Communication and Advocacy and Executive Offices Coordinator. And when Sir Ben was appointed as the incoming Finance Secretary of the Marcos Jr. administration, I thought that Mina would be one of the Finance Under Secretaries. But Mina has matured enough to be a Cabinet Secretary.

The Development Budget Coordination Committee (DBCC) is composed of four agencies — the DBM, the Department of Finance, NEDA, and BSP. The Council prepares the yearly budget, the revenues to fund it, and the macroeconomic assumptions that justify the spending-funding-borrowings outlook. And the heads of these four agencies are all from UPSE, all are non-politicians and plain technocrats with decades of experience in government.

I am hopeful that more market-oriented economic reforms and growth-enhancing policies that are non-burdensome to taxpayers can be fast tracked. I did not expect this under the Ferdinand Marcos, Jr. administration but it is there, a really good start. Looking towards more social and economic prosperity for the country and the Filipinos.
--------------