Conservatives and rightists fighting back in Europe

Some good things happening in Europe this month. 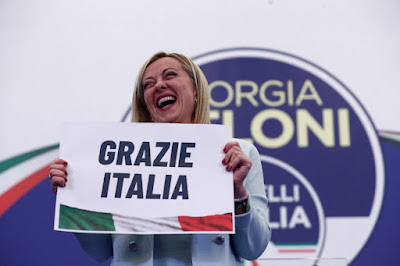 1. Italy, Brothers of Italy party won. "Yes to the natural family. No to the LGBT lobbies. No to the violence of Islam, yes to safer borders, no to mass immigration, yes to work for our people, and no to major international finance.”

4. Hungary, some MPs pushing back against EU lefties who are angry that a conservative party, anti leftism party won in elections early this year.

‘Nothing to do with Reality’: Hungarian MEP Slams Leftists After EU Declares His Country is ‘No Longer a Democracy’
PETER CADDLE. 20 Sep 2022
https://www.breitbart.com/europe/2022/09/20/nothing-to-do-with-reality-hungarian-mep-slams-leftists-after-eu-declares-his-country-is-no-longer-a-democracy/

"I can't define myself as Italian, Christian, woman, mother. No.
I must be citizen x, gender x, parent 1, parent 2. I must be a number.
Because when I am only a number, when I no longer have an identity or roots, then I will be a perfect slave at the mercy of financial speculators."

Boom! haha. Viva Meloni. Viva "right wing". The lefties are angry.
Gender is male or female, period. A man might be effeminate but he's still male.

On migration, the really "rightist" position is -- zero restriction on migration, zero visa needed. But zero welfare to migrants, no free or subsidized healthcare, housing, education, none. When immigrants who speak or understand nothing about their country destination, very little skills, when they cannot find a job, they starve, they die. If they steal, they go to jail.
This "rightist" policy on migration, I fully support.

Posted by Bienvenido Oplas Jr at 9:07 AM