This week will mark the sixth month of Russia’s invasion of Ukraine, so we review commodity prices as a result of invasion and US-led economic sanctions against Russia. We will also discuss the Philippine government budget for 2023 which is to be submitted to Congress today. Here are 10 things to watch out. 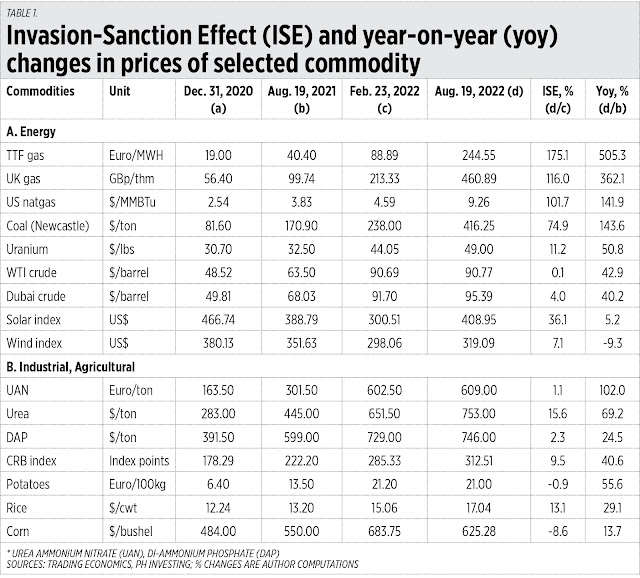 3. Underinvestment in fossil fuels, not the Russian invasion, are drivers of high commodity prices.

The prices of some commodities today are generally similar to their pre-invasion levels — see Dubai and WTI crude, UAN, DAP, potatoes, and so on. Most price hikes occurred even before the invasion on Feb. 24, except for solar and wind price indices which had bubble prices that peaked in January-February 2021, coinciding with US President Joseph Biden entering the White House. The Commodity Research Bureau (CRB) Index, comprising a basket of 19 commodities in energy, agriculture and metals, also exhibited this trend.

The numbers mentioned in Table 1, like 40-year high in UK inflation, are among the indicators of the long-term deindustrialization and degrowth economics of Europe. Very soon many companies there will migrate to Asia, the ASEAN in particular. The Philippines should prepare a wide welcome mat for big foreign investments and ensure that our energy supply is big and prices are competitive.

Today the Department of Budget and Management (DBM) submitted the 2023 budget materials to Congress. These are thick documents — the National Expenditure Program, Budget of Expenditures and Sources of Financing (BESF), and Staffing Summary. From BESF, the overall fiscal program shows big increases in revenues and disbursements in 2023 to 2025, so the budget deficits are expected to slow down to below P1 trillion perhaps by 2026 (See Table 2). 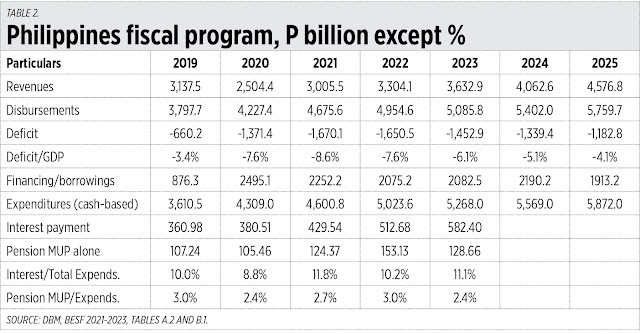 6. Interest payment alone from huge public debt will be P582 billion in 2023.

Government annual financing or borrowings will remain at P2+ trillion/year until 2024. Huge interest payments alone will siphon off more public resources, to 11% of total expenditures.

7. The military and uniformed personnel (MUP) pension is still a big fiscal risk.

There is a need to control certain public spending, remove favoritism for certain sectors and personnel like the MUP, control subsidies and not make them last forever. 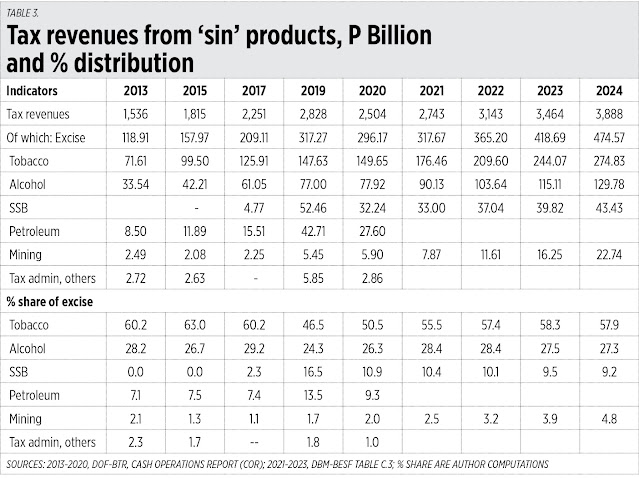 With the current excise tax of P55/pack of cigarettes, then a 5% increase yearly after, the advocates and implementers of universal healthcare will jump with joy when there are more smokers of legal tobacco. They will also be happy with more drinkers of legal alcohol.

10. Government should be more strict in fighting illicit trade and smuggled products.

Since the government earns big from legal alcohol and tobacco, and earns zero from smuggled cigarettes and alcohol, and smuggling rises in direct proportion to tax hikes, there should be stricter implementation of anti-illicit trade and anti-smuggling laws. Criminal and terrorist groups, smugglers, and their protectors in government are the main beneficiaries of more illicit trade.
---------------