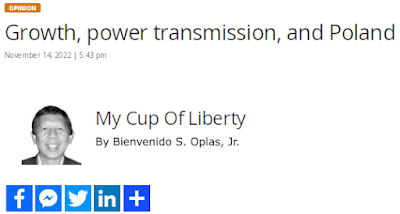 There are three topics this week and we go straight to them.

Of the 16 private economists polled by BusinessWorld (“Q3 GDP growth likely slowed — poll,” Nov. 7), only two — Ser Peña-Reyes of Ateneo and Jonas Ravelas of eManagement — made near projections of 7.7% and 7%, respectively.

Until early October, all the multilaterals — the Asian Development Bank, the World Bank, and the International Monetary Fund (ADB, WB, IMF) — projected growth of 6.5% in 2022. Since they knew that Q1 and Q2 average growth was already at 7.8%, they implied that the average growth in Q3 and Q4 would only be 5.2%. Far out. They may have good econometric models but archaic and unrealistic assumptions in plugging numbers to their models.

This column projected that the Philippines’ GDP growth would be 7-7.5% for Q3 2022. I wrote the following statements in BusinessWorld:

In 2020, the Philippines had the worst economic contraction in Asia. This year, it looks like the Philippines will have the fourth fastest growth in Asia after Malaysia, Vietnam and India (see Table 1). 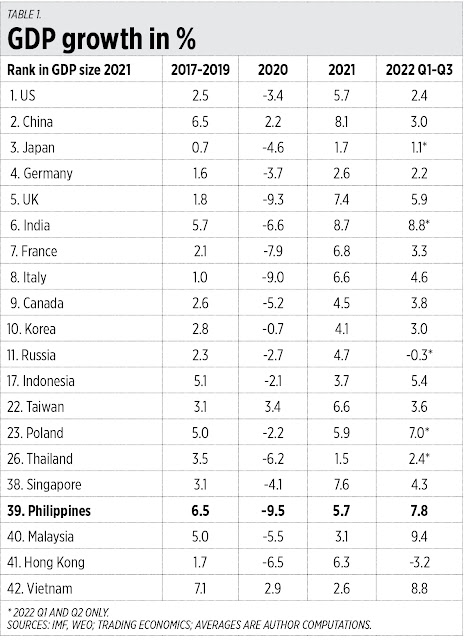 What explains the fast growth in Q3? I see three immediate reasons.

One, the lifting of the lockdown by President Ferdinand Marcos, Jr., the assurance in his first state of the nation address last July that he would not impose any more lockdowns.

Two, the very early formation of the competent economic team. Then the early announcement by Finance Secretary Benjamin Diokno that there would be no tax hikes in major sectors despite the huge public debt that ballooned over the last two years. Budget Secretary Amenah Pangandaman also announced measures to have fiscal discipline via bureaucracy rightsizing. National Economic and Development Authority Secretary Arsenio Balisacan announced the medium-term plan and more government intervention that was not included there.

Three, the series of Philippine Economic Briefing (PEB) investment roadshows by the president and the economic team in September alone — in Jakarta and Singapore on Sept. 6 and 7, and New York City on Sept. 22. This sent a clear, explicit signal to domestic and foreign investors that market-oriented reforms are already in place for them.

My projection for Q4 GDP growth is 7.5-8%. I will explain the basis for this in the next few weeks.

I want to comment on these four recent reports in BusinessWorld.

Report number one is about Republic Act (RA) 11552 extending the lifeline rate, or subsidies for low usage consumers, from 20 to 50 years. There are two problems with endless subsidies like this law. One, not all low-usage consumers are poor — they may be rich people who have vacation houses somewhere and just occasionally use these and hence, consumption is low. And, two, other consumers will be forced to pay for that subsidy and this will distort household savings and spending.

Reports number two and three show that the National Grid Corp. of the Philippines (NGCP) — the only remaining private monopoly nationwide — is indeed part of the reason why there are still regular yellow and red low power alerts happening this year. Power supply and reserves are often thin and can lead to rotating blackouts, which can lead to damaged appliances and machines, the frequent use of gensets by companies and candles by the poor, and few investors coming in. While ageing power plants and a sudden spike in power demand can be blamed, the NGCP has its share of blame because of its continued failure to procure adequate levels of reserve power exclusively contracted to them to ensure grid security and stability.

The monopoly has a dual role and responsibility, as a network and a system operator and has been lacking in both roles. If it does not want to secure firm contracts for ancillary services and grid reliability, then it can leave its role as the system operator and give it to Transco.

I saw the NGCP press release that was published in bilyonaryo.com, and find it weird and deceptive. It talked about politics and “political maneuvers” when the real issues are grid stability, and how we can avoid having regular yellow-red alerts even during the rainy months.

The Energy Regulatory Commission (ERC) is correct. The NGCP, the monopolist, should shape up, pay the fines, obey the regulator or risk losing the franchise that granted it a monopoly nationwide in power transmission function.

The Philippines has low GDP partly because of its low power generation capacity. In 2021, the country produced a total (on-grid plus off-grid power) of only 108.3 terawatt-hours (TWH), of which the combined contribution of solar plus wind was only about 2.7 TWH or just 2.5% of total. Vietnam’s power generation is more than twice our’s, Malaysia and Thailand’s are about two-thirds larger, than the Philippines (see Table 2). 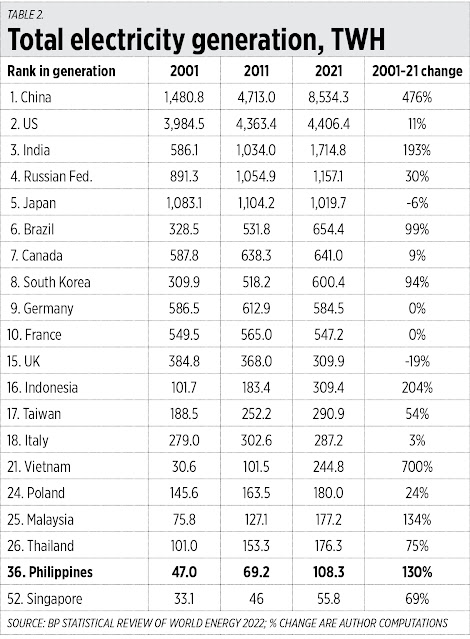 Many companies might want to expand operations but they see that they will face blackouts due to the low power supply and margins, so they postpone expansion. And this puts a brake on more economic growth.

Countries with high expansion in power generation over the last two decades (at least 130%, see Table 2) are also the same countries that had GDP growth of 5% or higher prior to the lockdowns of 2020-2021 (see Table 1) — China, India, Indonesia, Vietnam, Malaysia, and the Philippines. They are also poised to have at least 5% growth this year. Nonetheless, the Philippines must expand its power generation significantly from the current average of about 5-6 TWH/year to 8-9 TWH/year in 2023-2028. Vietnam’s generation increases by about 18 TWH/year.

Report number four is about the rise in power generation charge by plants with power supply agreements (PSAs), and not due to distribution charge or spot market generation cost and other factors. Meralco remains a responsible distribution utility that keeps its overall, all-in price of below P10/kwh while many electric cooperatives nationwide have rates that are twice its level, which penalize many consumers in the provinces.

Upon the invitation of the Embassy of Poland to the Philippines, I attended the celebration of their national day on Nov. 11 at the Blue Leaf Pavillion, McKinley Hill, Taguig City. It was the second event by the embassy that I attended. The first was when Marcin Przydacz, Undersecretary of State in the Polish Ministry of Foreign Affairs, came to Manila for a press conference on July 13 on the subject of Poland-Asia economic cooperation and the war in Ukraine.

Before the program started, I briefly spoke with Poland’s Ambassador, Jaroslaw Szczepankiewicz, and thanked him personally for the invitation. Among the guests from the diplomatic community in Manila that I met that night were the Thai Ambassador Vasin Ruangprateepsaeng, the Indonesian Ambassador Agus Widjojo, and Czech Republic First Secretary and Consul Jan Krivos.

Poland is the 23rd largest economy in the world (its 2021 GDP size was $679 billion) and 10th largest in Europe. I included Poland in both tables in this column to further situate its economic and energy capacity. The Philippines’ main trade partners in Europe are the Netherlands, Germany, the United Kingdom, and France. There should be good business potentials between the Philippines and Poland when there is closer trade and investment promotion activities done in both countries.
---------------