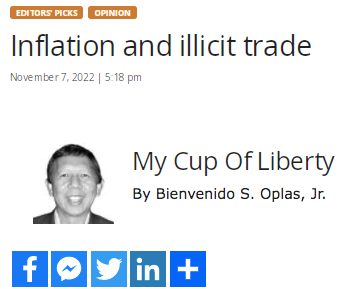 Last week, the big national news was the leap in the country’s inflation rate to 7.7% in October from 6.9% in September, according to the Philippine Statistics Authority (PSA). Meanwhile, the big international news was the high October inflation in Europe, with Germany hitting 10.4%, Italy with 11.9%, and so on. The Philippines now is one of four Asian economies with 14-year high inflation rates, the other three being Singapore, Thailand, and Taiwan (see Table 1). 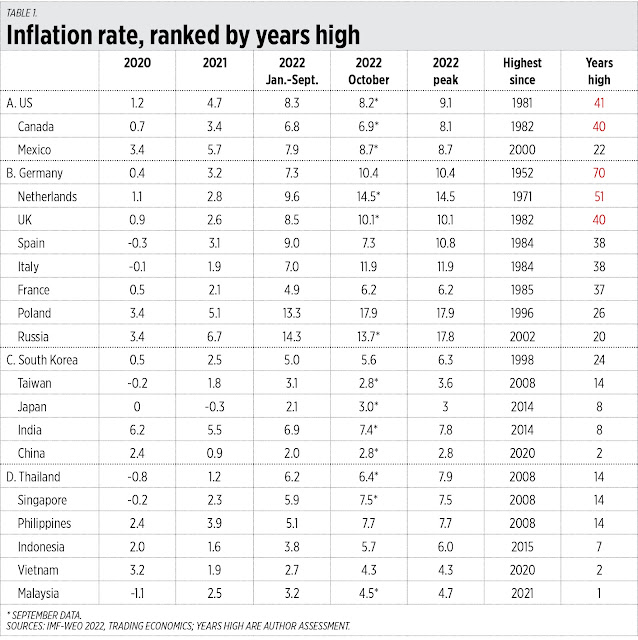 Practically all of these countries’ central banks have raised their interest rates to fight high inflation, and inflation is not tamed yet, suggesting the policy is not working or working only mildly.

High inflation means that demand is higher than the supply of goods and services. It also means that the money supply is high relative to commodities supply — there is more money chasing fewer commodities.

To really fight inflation, non-monetary policy measures must be done. One, more people should be working and the endless no-timetable welfare and subsidies should shrink. Two, the various government bureaucracies, national and local, should also shrink because expenditures for their salaries, bonuses, offices, etc. are so high relative to revenues, leading to huge borrowings, huge interest payment that will require huge taxes, fines, and penalties today and tomorrow to offset. And, three, huge leakages in revenues should be plugged, which includes a vigorous fight against smuggling and/or reducing tax rates to realistic levels that make smuggling less attractive.

How big or how serious is smuggling and the illicit trade of tobacco alone (not including the smuggling of alcohol, petroleum, electronics and gadgets, etc.) in the Philippines? I reviewed some literature and reports, including my own estimate, and the figures range from P15 billion in unpaid taxes in 2013, to a high of P60 billion a year (see Table 2). 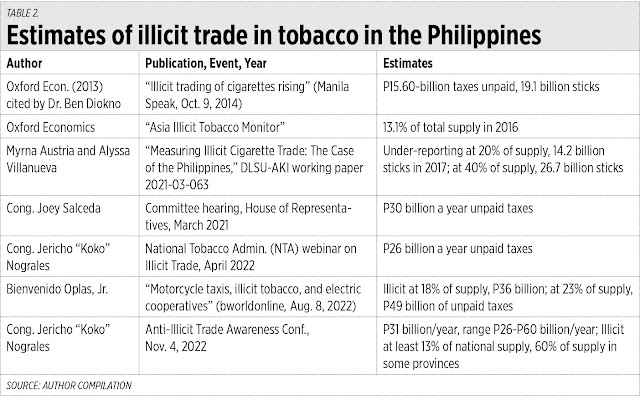 If we take the median of P30 billion/year in unpaid tobacco taxes as estimated by Congressman Joey Salceda, and assuming that vigorous implementation of anti-smuggling operations by various lead enforcement agencies (LEAs) and local governments, the DoF can realize at least P15 billion in additional revenues yearly. That P15 billion can fund the full year budget of the BIR and BoC, or the PCG, or the NBI and CIDG (see Table 3). 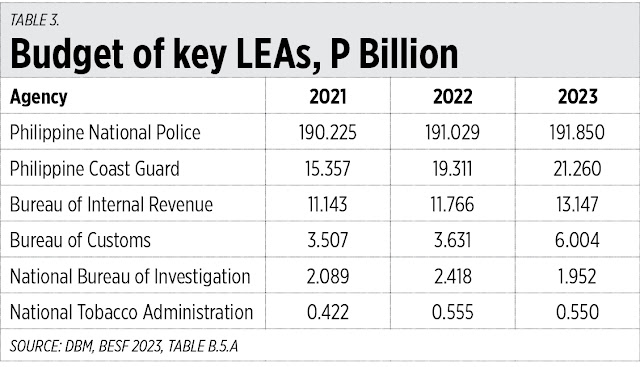 A Coast Guard officer from Sulu made a good observation that there has been free trade between Sulu-Tawi Tawi and Sabah, and other islands of Malaysia and Indonesia. Getting just the annual business permits of National Government agencies in Zamboanga makes it very costly to do legal business. Which implies that free trade — which is pro-consumer — is more dynamic when there are fewer permits, and less taxes and tariffs.

In many areas and cities of coastal Mindanao, illicit tobacco is sold for as low as P35/pack while the cheapest legal tobacco is P95/pack because the excise tax alone is already P55/pack in 2022, and will rise to P60/pack in 2023, then increase by 5% yearly from 2024 onwards. As the tax increases, the price gap between the legal and illegal products also increases and more people will shift to the illicit products and government will earn less after some time. This is the essence of the “Laffer Curve” in economics: as tax rates increase, revenues initially increase then reach a curve plateau, and as tax rates further increase, revenues begin to fall. People either reduce their consumption of the taxed products, or they shift to the alternative un-taxed, smuggled products.

One revenue measure that should be considered by Congress to avoid this situation of the Laffer Curve, is to stop the high if not progressive increase in taxes for “sin” products: alcohol, tobacco and sugar. Having a big nanny state is not good for people. A consistent nanny state should also regulate and tax many other “dangerous” activities like downhill cycling, rock climbing, sky jumping, deep sea diving, speed racing, etc. Just one big mistake in these activities can mean severe injuries if not deaths. The government should focus on expanding information awareness to people then let them live their own lives.

Meanwhile, there will be another BusinessWorld Economic Forum, with the theme “Forecast 2023: Opportunity in Uncertainty,” on Nov. 29 at the Grand Hyatt Hotel BGC. Among the Keynote Speakers will be House Speaker Martin Romualdez, DoF Secretary Benjamin Diokno, and IMF Director for Asia Pacific Krishna Srinivasan.
--------------