BWorld 570, On government debt, WESM prices, and the UP presidency 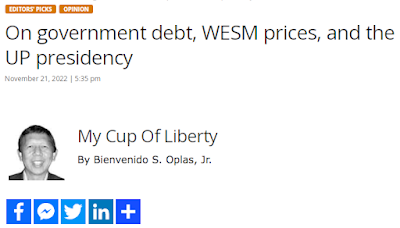 Today and tomorrow I am attending the Pilipinas Conference 2022, organized by Stratbase ADR Institute, held at the Ayala Museum in Makati City. I thank Stratbase president, friend, and fellow BusinessWorld columnist Dindo Manhit, for the invitation. Among the Keynote Speakers of the two-day conference are Department of Budget and Management (DBM) Secretary Amenah Pangandaman on Nov. 21, and Finance Secretary Benjamin Diokno on Nov. 22.

This morning, Secretary Pangandaman spoke about “Open Government and Digitization Efforts of the DBM.” Among the things she said are: building a CSO (certified security officer) desk in the DBM to directly link the public to the agency, a P12.47-billion budget for ICT (information and communications technology) and digitalization programs and projects in 2023 for the digital transformation of the government’s procurement process, and diminish human discretion in government transactions.

These are good initiatives by Secretary Pangandaman to help reduce waste and inefficiencies in government transactions and procurement. When waste is minimized, the need for taxes to sustain wasteful spending is also minimized. People should use their additional income and savings for corporate expansion and household needs, for more job creation, not for funding more waste in government.

Tomorrow, Secretary Diokno will talk about “Strengthening Public-Private Partnerships (PPPs) to Rebuild the Philippine Economy” — a timely topic because the Philippine government’s debt keeps rising and we need more hard infrastructure to hasten mobility of people and commodities, goods and services, without compromising more tax resources. 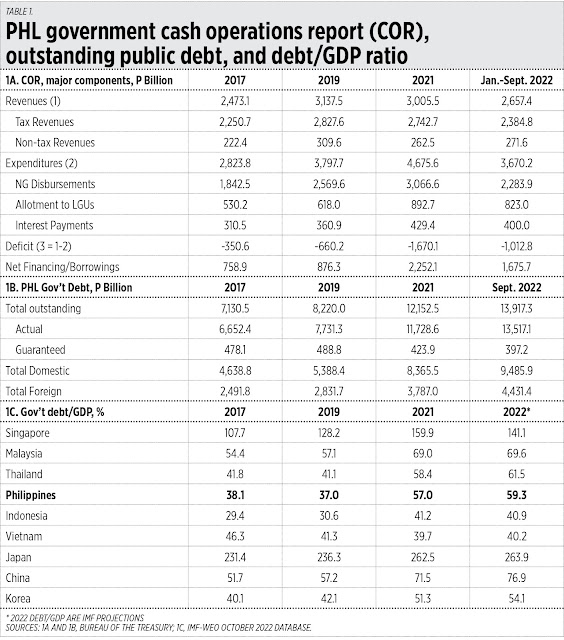 Stagflation (stagnant growth plus high inflation) is already building up in many rich countries this year and a global recession is likely to happen next year. We should have wide leeway in both public and private resources to sustain important services without resorting to more borrowings and imposing new taxes on companies and people who are just recovering their revenues and income this year to 2019 level.

ATTACKS AGAINST DOE AND ERC LEADERSHIP

Last week, the Independent Electricity Market Operator of the Philippines (IEMOP) reported a piece of good news — high power margin (supply less demand) of 3,500+ megawatts (MW) and lower prices at the Wholesale Electricity Spot Market (WESM) for the November 2022 billing period. I summarize in Table 2 the prices from January to November billing, and added the percent contribution of coal and intermittent sources. Coal is frequently demonized but is largely responsible for why those who want it phased out still have electricity 24/7. The beloved wind-solar have combined generation of near-insignificant levels. 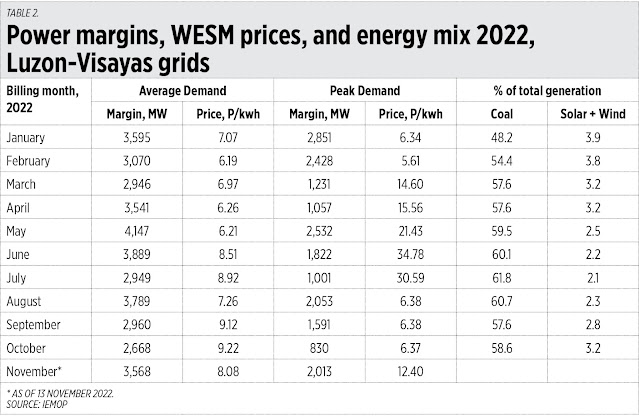 Recently, there have been attacks against Energy Secretary Raphael Lotilla and Energy Regulatory Commission (ERC) Chair Monalisa Dimalanta which say that they are not objective and neutral because they have worked with one of the major gencos in the country. While this might be a factor, Lotilla and Dimalanta are respected lawyers and products of UP Law who have minds of their own as government officials. Besides, policy debates like whether or not to press the National Grid Corp. of the Philippines (NGCP) to honor its contract to secure the required and exclusive ancillary services for grid stability, its being the only private monopoly nationwide and which did not do a public listing, should be discussed as societal issues, not personality issues.

The more that detractors personally attack Secretary Lotilla and Chair Dimalanta, the more they expose themselves as incapable of focusing on issues and just pursuing narrow corporate interests, not the consumer’s interest of having a stable grid free from frequent threats of power fluctuation if not blackouts.

The University of the Philippines (UP) will soon have a new president. There are six nominees or candidates, all accomplished and respected individuals who have the capacity to lead the premier educational system of the country with eight constituent universities and campuses nationwide.

For me, a UP President is someone with specific, unique characteristics like the following:

One, he knows UP in and out. Two, he has an excellent academic record and achievements. And three, he has national and international stature to help mobilize resources for the university and not just rely solely on taxpayers’ money.

The candidate who best fills this big pair of shoes, I think, is the current Chancellor of UP Diliman, Dr. Fidel Nemenzo. He studied in UP from nursery and elementary to high school to college, has lived in the campus all throughout his life except when he went abroad for his graduate studies and lectures.

Dr. Nemenzo is a hard-core mathematician and academic. He finished BS Math at UP, MS and PhD Math at Sophia University in Japan, has done Math research and held teaching posts in universities in Singapore, Phnom Penh, Tokyo, Amsterdam, and Munich. His favorite research areas are number theory, elliptic curves, and coding theory. He was the past president of the Mathematical Society of the Philippines, chair of the Division of Mathematical Sciences, National Research Council of the Phils. (NRCP), and past president of the Southeast Asian Mathematical Society.

As Chancellor of UP Diliman, the biggest of the eight campuses, Dr. Nemenzo has initiated or pushed for the creation of programs in areas crucial for science and technology innovation and industrialization such as: a PhD in Data Science, a PhD in Artificial Intelligence (AI), a Master of Engineering in AI, the UP Data Commons (high performance computational facility for R&D), and the UP Center for Intelligent Systems.

With such an excellent academic record, and national and international exposure as a deep-blue academic and researcher, if he becomes the University President he should further project UP as an academic center for hard core natural and applied sciences.

While corporations are strong in applied sciences and product marketing, they lack expertise in natural sciences and basic research. Partnership with universities that are strong in the science, technology, engineering, and math (STEM) like UP is a must for them to have technological innovation and mastery. And such technological and funding partnerships would help UP rely less on government resources — which, Table 1 above shows, have been deteriorating.