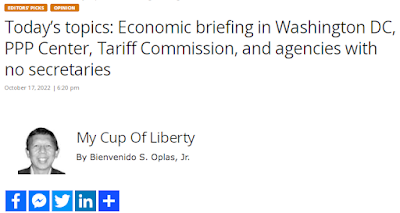 On Oct. 7, I was interviewed on the BusinessWorld Live program of One News, Cignal TV which is hosted by very articulate broadcasters Danie Laurel and Jes delos Santos. The topic was about the impact of the OPEC+ decision to cut their combined oil production by 2 million barrels per day (mbpd), from 43.8 mbpd until this October to 41.8 mbpd by November. Projected global oil demand is 100 mbpd.

Towards the end, they asked me for my assessment of President Ferdinand Marcos, Jr.’s first 100 days, I said that on a scale of one to 10, 10 being the highest, I would give him a seven overall. I would add now that if we focus on economic policies, I would give him an 8.5. For three reasons.

One, the quick formation of the administration’s economic team — Bangko Sentral ng Pilipinas (BSP) Governor Felipe Medalla, Finance Secretary Benjamin Diokno, Economic Planning Secretary Arsenio Balisacan, Budget Secretary Amenah Pangandaman — high caliber economic minds and public officials, as early as May 30 or just three weeks after the May 9 elections. The President wanted to send a clear signal to investors and the public that his economic team are mainly technocrats and the choice was not based on political patronage.

Two, the prudent management of inflation, the main concern of many people. The 6.9% inflation rate in September was indeed high but it was only a four-year high, at the same level as 6.9% in October 2018. Compare that with Germany’s 10% which is a 70-year high (the highest since 1952), the Netherlands’ 51-year high, the US, UK, and Canada’s 40-year high, and so on. The discontinuation of geographical lockdowns by the previous administration was a big factor for more production and transportation of goods and services leading to controlled inflation.

Three, the three Philippine Economic Briefing (PEB) events abroad, a series of investment promotion campaigns telling global investors that the country is ready and prepared to welcome them. The President, the economic team, and infrastructure team, about nine Cabinet Secretaries plus the BSP Governor, telling investors face to face to come to the country. The PEB in Jakarta and Singapore on Sept. 6-7 resulted in about $14.4 billion in investment pledges, and the PEB in New York on Sept. 22 saw about $4 billion investment plans.

I cannot say the economic policies are near-perfect (a score of nine to 10) because of one big burden — the continued huge borrowings and high interest payments yearly are a big pulldown. The government’s outstanding public debt rose from P8.22 trillion (actual + guaranteed) in 2019 to P12.15 trillion in 2021 and P13.41 trillion as of August 2022. It is projected to reach P14.0 trillion by the end of this year. The net financing (gross borrowings minus principal amortization) rose from P0.88 trillion in 2019 to P2.37 trillion a year average for 2020-2021.

These numbers I explained today during an interview by veteran host Cito Beltran on his program Agenda on One News, Cignal TV. Thanks for the opportunity to discuss these economic numbers and their implications, Cito.

Last Saturday, Oct. 15, another PEB was held in Washington DC. BSP Governor Medalla, Secretaries Diokno and Pangandaman, and National Economic and Development Authority (NEDA) Assistant Secretary Sarah Lynn Daway-Ducanes spoke to the assembled investors and some US federal officials, and reiterated the optimistic condition in the country — that we have institutionalized and legislated a conducive regulatory and investment environment.

Also last week, the International Monetary Fund (IMF) released the October update of the World Economic Outlook (WEO). The Philippines is the 39th largest economy in the world, tailing No. 38 Singapore by just $3 billion.

The latest projections of the three multilaterals — the Asian Development Bank or ADB, the World Bank or WB, and the IMF — put the Philippines’ 2022 GDP growth at 6.5%. If true, that should be the 4th fastest growth in the world’s top 50 largest economies, trailing Bangladesh’s 7.2%, Vietnam’s 7%, and India’s 6.8% (see table). 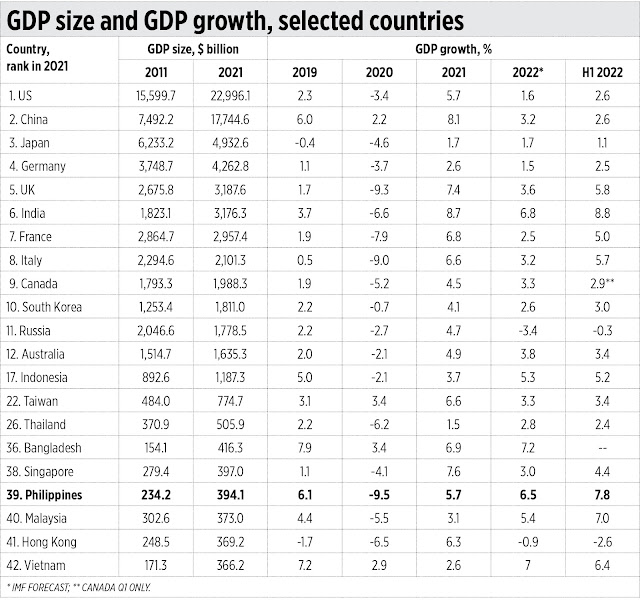 I think the multilaterals’ assessment of the Philippines is not realistic enough. In the first half (H1), or quarters 1 and 2, our growth was already 7.8%. This implies that they project H2 growth only at 5.2% to have a full year growth of 6.5%.

Using the power and electricity demand for July-September of about 6-7% (the Luzon-Visayas grids) as a proxy for GDP growth, I see growth of 7-7.5% in Q3 and this will likely be sustained in Q4. So, the full year 2022 growth would be around 7.5%, not the 6.5% projection of the multilaterals.

And from anecdotal data that I see both in Metro Manila and some provinces, there is high and fast recovery this year given the muted and slow growth in 2021.

Investors who attended the four PEB in four big cities abroad should be assured that they are entering a dynamic economy with a big consumer base.

Given the huge annual budget deficit and net borrowings that started in 2020, many projects should be taken out of an “all taxpayers pay” scheme and be put under “only users pay” scheme. The PPP projects embody this principle and Ms. Hernandez — an engineer, economist, and financial advisor, a three-in-one brain — has the will and expertise to make this pivot of unburdening taxpayers while having big infrastructure projects.

Also last week, the Tariff Commission (TC) ruled on two different cases on cement tariffs. First, that the safeguard measure against cement imports cannot be extended beyond October 2022 because the requirements of the law (RA 8800) were not met. And second, the imposition of anti-dumping (AD) duties against imports of cement from Vietnam — that there will be no AD duties for exporters with de minimis or negative dumping margins (DMs), and have AD duties on exporters which have non-de minimis positive DMs.

A legal technicality for me, but as I understand it that the TC overall has ruled in favor of free trade in cement. Congratulations to the commission, headed by Chairperson Marilou Mendoza. My free trade mind actually supports dumping. If Vietnam will burden its taxpayers to subsidize cheap cement exports to the Philippines, so be it. The biggest protection against strong storms, floods, and earthquakes is not more politics. It is strong houses and buildings. People should use more cement and steel to live and work in strong structures.

DEPARTMENTS WITH NO SECRETARIES YET

The Office of Press Secretary (OPS) and Department of Health (DoH) are among the departments and agencies with Acting or Officer in Charge (OIC) leaders only.

I think a Press Secretary/Presidential Spokesperson is someone with at least four characteristics. One, they are savvy in the law because many Presidential pronouncements have legal implications. Two, they have past or current media and public relations experience, preferably both in broadcast/TV and print media. Three, they have a deep corporate background to augment and better appreciate the economic team’s big push to attract more investments into the country. And four, they must have good looks, and a mature and charismatic personality.

I can think of one person who fits this shoe — Michael “Mike” Toledo.

For Health Secretary, I think that the previous and current leadership of the DoH and their consultants were responsible for the very strict lockdown policies in 2020 — leading to the Philippines having the worst economic contraction in Asia, also the worst contraction in Philippine history since post-World War 2. They seem to plan for an endless health emergency situation, and they do not seem to mind if public borrowings remain at P2+ trillion yearly for many years so long as their yearly budget and vaccine procurement remain high.

Two doctors would be good as the next DoH Secretary. One is Dr. Godofreda “Jody” Vergeire-Dalmacion, an epidemiologist and retired professor from the Department of Pharmacology, University of the Philippines (UP) College of Medicine. The other is Dr. Benigno “Iggy” Agbayani, Jr., also a product of the UP College of Medicine and former President of Concerned Doctors and Citizens of the Philippines (CDC PH). Both physicians have high credibility and independence, they opposed the lockdown, and advocated focused protection via cheap, proven, and off-patent medicines.