The Asia Liberty Forum 2022 was successfully held last week Sept. 29-30 at Shangri-La The Fort, sponsored by the Atlas Network and Foundation for Economic Freedom (FEF). Among my old friends from the US who came were Simon Lee, formerly with the Lion Rock Institute-HK, Philip Thompson of the Tholos Foundation, Joe Lehman of the Mackinac Center, Kris Mauren of the Acton Institute, Fred McMahon of the Fraser Institute in Canada, and Basanta Adhikari of Bikalpa in Nepal.

The day before, Sept. 28, there was an Economic Freedom Audit of the Philippines, presenting the results from the Economic Freedom of the World (EFW) Index which is done annually by the Fraser Institute. EFW 2022 showed the Philippines’ global rank was No. 66 out of 186 countries and territories covered. It is higher than Thailand, India, Laos, Vietnam, and China.

But the impact of the COVID-19 lockdown is not included in the report. The two years of lockdown were a triumph of Big Government and saw the retreat of economic freedom. Many free market leaders themselves did not oppose the mandatory shutdown of many businesses and shops, mandatory stay-home orders, mandatory distancing, and mandatory vaccination. Mandatory means choice and individual freedom are zero or near-zero.

I will attempt to measure and quantify the impact of mandatory shutdowns of many businesses (lockdown) and mandatory vaccination by introducing the concept of an Economic Freedom Deterioration Index (EFDI). A more direct term would be Economic Freedom Bastardized by Lockdown Index but EFDI is the more pragmatic term.

This is a rough measurement with limited components and countries covered. For this exercise, I use only four components: percent changes in mobility from the baseline period January to Feb. 6, 2020 of Google COVID-19 Community Mobility Reports’ 1.) Transit Stations (TS), and, 2.) Retail and Recreation (RR); 3.) GDP growth percentage points increase from 2019-2020, and, 4.) Gross debt/GDP ratio percentage points increase from 2019-2021 (Table 1). 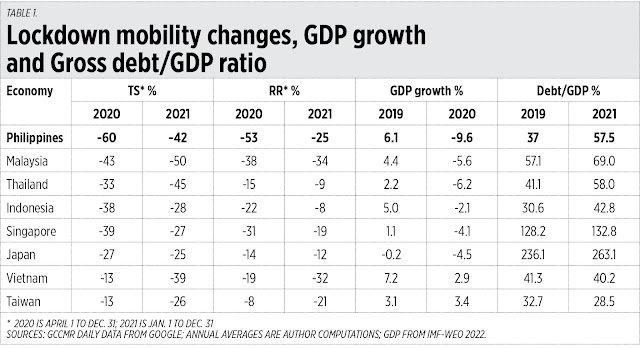 I assigned scores of 1 to 5. The higher the score, the bigger the deterioration in economic freedom. For the four components, here are their respective scores:

Other researchers can expand on this and introduce more components and factors, assign different scores and weights, and cover more countries. I hope to do that someday.

Consider these columns and reports in BusinessWorld:

1. “The way forward for the power industry” by Romeo Bernardo (Jan. 26, 2014): “… ensuring that the systems operator National Grid Corporation of the Philippines (NGCP) fully contracts what the system requires. The establishment of a reserve market has been long delayed.”

2. “Red Alert and EPIRA” also by Romeo Bernardo (June 13, 2021): “… the transmission line operator has not fully contracted firm power reserves. Where the system operator’s role is to procure reserves, much like procuring a genset for your home, to call on in a time of power crisis… NGCP over the past 10 years has been non-compliant with the rules… in the form of a lack of transmission lines, a lack of redundancies in our network, a lack of power reserves, and not meeting the IPO requirements under the law.”

3. “NGCP power reserve compliance inadequate, key legislator claims” by Angelica Yang (June 9, 2021). She quoted Senator Sherwin Gatchalian: “The NGCP (is) not contracting the right amount of reserves. Clearly, they are violating that policy… ERC (Energy Regulatory Commission) should now implement the policy. The foundation has been laid down by the Supreme Court that DoE (Department of Energy) produces the policy and ERC enforces the policy. In this case, since NGCP is not contracting, ERC should punish them.”

4. “DoE’s Cusi urges NGCP to meet reserve contract requirement instead of seeking Palace intervention” by Marielle Lucenio (Feb. 13, 2022): “The DoE requires the grid to have reserve power, known as ancillary services (AS) on tap committed under firm contracts. The NGCP’s position is that full compliance with the firm-contract requirement will ultimately raise power prices because of the expense involved in committing reserves. It said it instead proposes to tap a network of AS providers under firm and non-firm contracts.”

5. “ERC to NGCP: Explain failure to comply with reserve power rules” by Ashley Erika Jose (Sept. 19, 2022): “The ERC cited three sections of the DoE’s department circular which it said NGCP failed to comply. Section 4.2 requires NGCP to seek approval from the DoE on its ancillary service agreement procurement plan; Sections 7.4 and 7.5 mandate NGCP to seek the approval of the DoE on the terms of reference of the ancillary service competitive selection process (AS CSP); and Sections 7.1 and 7.11 require NGCP to complete the AS CSP within six months from the effectivity of the circular.”

As shown by the continuing yellow and red alerts in the grid until this year, it is obvious that the NGCP — the only remaining private monopoly nationwide — is abusing its power and showing continued insensitivity to the power needs of Philippine businesses and households. The new ERC leadership should go after them as the previous ERC leadership was too lazy to do its job.

The Philippine Statistics Authority (PSA) released the updates on monthly vital statistics and causes of deaths of the country last Saturday. I count only data for January to April because the data from May-June are still incomplete. Notable trends are: 1.) continued decline in births, 2.) some stabilization in deaths in 2022, 3.) continued erosion in net increase in population, 4.) big decrease in deaths from pneumonia, 5.) likely due to labeling of pneumonia deaths as COVID-19 deaths.

Among the possible explanations for the continued decline in births would be: 1.) the reduced number of marriages in 2020-2021, 2.) fewer babies planned by couples due to economic hardships, and, 3.) possible adverse effects on fertility by COVID vaccines.

Declining births is a bad and dangerous trend. This will lead to less workers and entrepreneurs, and less producers and consumers someday. Government must study in depth its causes and quickly remedy the situation.
------------------