Macroecon 20, Strong US dollar and how to deal with it

MANILA, Philippines — The Philippine peso has depreciated to 57.64:$1 last Sept. 20, an all-time low. The last time we have a similar level of depreciation was in October 2004, then July to August 2005 when the peso reached 56 to the dollar.

The difference in today’s depreciation with those 17 to18 years ago is that current depreciation is rather fast, and so many other currencies around the world have similar experience of fast depreciation, see this table showing year-on-year (yoy) percent change and all-time high (ATH) exchange rates. 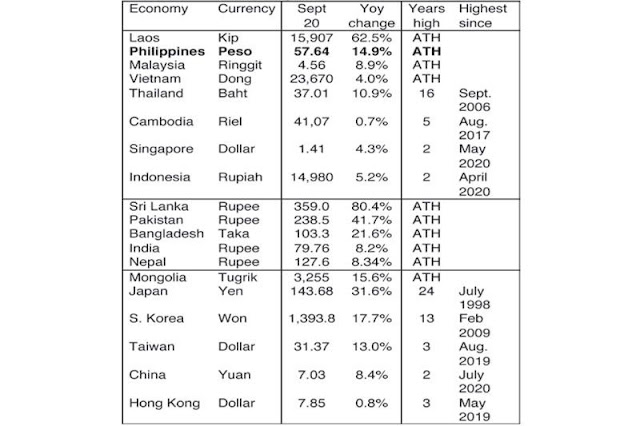 The first question is why is this happening? What is driving the fast appreciation of the dollar?

The quick answer is the series of interest rate hikes by the US Federal Reserve or its central bank, from 0.5 percent until about February this year to 2.5 percent last August, and projected to further rise to 3.25 percent soon.

Central banks and monetary authorities raise interest rates to combat high inflation, encourage people and businesses to save more rather than spend and this will hopefully cool down prices.

In addition, the US government is borrowing and spending like a drunken sailor so it offers high interest rates to attract trillions of dollars of money. The US 10-year bonds was only 1.10 percent in January 2021 when Trump left the White House. After 12 months of the Biden administration, it increased to 1.81 percent in January 2022, and increased further to 3.56 percent as of Sept. 20.

So with high interest rates in the US, many dollar investments in the Philippines and other countries are pulled out and dollars fly back to the US to take advantage of higher returns. And that is how many countries’ currencies depreciated fast.

The next questions are: (1) Up to what level do we expect the Philippine peso to further depreciate, say by end-October at 59, or 60? (2) If yes, should we be too alarmed, and we should make more noise to pressure the Bangko Sentral to further raise its interest rates (already increased from 2.0 percent around February to 3.75 percent last August)  to 4.25 percent or higher?

I am not a finance or monetary economics guy but from the numbers that I see, my answer to the two questions are: Yes to #1, and No to #2. Consider the following:

Two, a substantial amount of the heavy borrowings by the Biden administration are for unproductive spending like sending more money, arms and bombs to support Ukraine and Israel, Syria and other countries where the US continues its “endless wars” policy. Also to expand subsidies and freebies to domestic welfare dependents to win more votes for the Democrats in the coming November mid-term elections.

So high US borrowings, high Treasury bond rates, and high Fed rates, will continue to pressure currencies abroad like the Philippine peso to further depreciate. And a 60:$1 may not be far behind.

But this should not cause more alarm here because (1) we should prioritize growth and higher interest rates here will temper growth, and (2) dollar strengthening is temporary, something like built on soft sand due to heavy US government borrowings and debt financing, and not based on strong business environment there.

Very soon, some economic chaos will ensue there and those dollars will scamper out and go back to emerging markets where inflation rates are more tolerable and energy prices are more realistic and not stratospheric like what many EU countries experience now.

Are the projected GDP growth by the Philippine economic team of seven percent in 2022 then 6.5 to 8 percent by 2023 to 2028 achievable? My quick answer is Yes.

One, first half 2022 growth already at 7.8 percent, plus strong increase in electricity demand in July to September as proxy for GDP growth points to a seven to eight percent growth in 2022.

Two, Europe is moving towards deindustrialization, degrowth and blackout economics, so many businesses there will scamper out and go to Asia including the Philippines. These are big FDIs that will create more high-paying jobs here.

Bienvenido Oplas Jr. is an economist and a columnist in BusinessWorld. His email address is minimalgovernment@gmail.com.
------------------

Posted by Bienvenido Oplas Jr at 11:41 AM