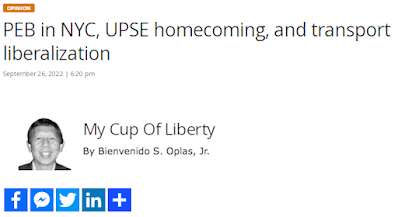 Last Thursday, Sept. 22, another Philippine Economic Briefing (PEB) was held in New York, USA. This was a sequel to the successful PEB held in Jakarta and Singapore on Sept. 6 and 7 where some $14.4 billion worth of investment pledges to the Philippines were made.

President Ferdinand Marcos, Jr., his entire economic team and infrastructure team, plus representatives of local conglomerates were there and gave the audience — business leaders in various industries, from manufacturing to finance and banking, real estate, etc. in the US — details on why they should come to the Philippines and invest here.

Since the audience was composed of US-based business leaders, Secretary Diokno highlighted the fact that the US is the Philippines’ 3rd largest trade partner (merchandise exports and imports), 3rd largest source of foreign direct investments (FDIs), and main source of remittances by Overseas Filipino Workers (OFWs), professionals, and businessmen. He showed the numbers for 2016-2021. I came up with some numbers for some countries, then updated the data until 2022 (see the table). Data comes from the Bangko Sentral ng Pilipinas (BSP) and the Philippine Statistics Authority (PSA). 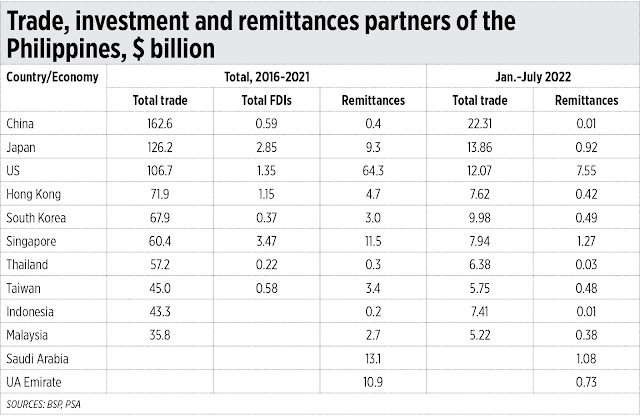 One implication of the numbers — given the continued strengthening of the US dollar and sustained depreciation of the peso and many other global currencies — I think is that we need to further diversify our international reserves and international payment system and use less dollars and expand more use of China’s yuan, Japan’s yen, Korea’s won, and the Hong Kong and Singapore dollars.

I am not sure how practical this is, but maybe Philippine hotels, restaurant chains, and other companies can accept those Asian currencies from our Asian visitors and business transactions, then use those currencies when we buy goods and services from them. This way, many of our trade, investment, and remittance payments can be shielded from the continued strong US dollar and continued peso depreciation.

The UP School of Economics (UPSE) annually holds an alumni homecoming, led by the UPSE Alumni Association (UPSEAA). After two years of COVID-19 lockdown, Homecoming 2022 — dubbed as BTS (Balik Tayo sa SE) — was held last Saturday, Sept. 24, at the school auditorium. It was sponsored by the Silver Jubilarians, batch 1997, and Golden Jubilarians 1972.

The first part of the day featured the launching of the coffee table book, More Than: The UP School of Economics, edited by eight alumni led by Professor Oggie Arcenas. Former Dean Emmanuel de Dios gave a warm description of the book and the people featured there, former Professor Winnie Monsod gave a very inspirational talk that walked the audience from the 1960s to the present, and the various alumni who joined the government and corporate world. Her talk can be summarized as: “UPSE DNA is Honor and Excellence.” Both De Dios and Monsod were my teachers in the 1980s.

More Than contains many photos of students, faculty, and alumni. Among the prominent alumni of UPSE who served in government are:

After the book launch, the homecoming program started. Key personalities of Batch 1997 include Edu Niala as batch convenor and Program MC, Ms. Herrera-Dy who elaborately and warmly introduced the keynote speaker, and Justice Undersecretary Nicky Ty who gave the closing remarks.

Keynote Speaker was Ms. Quimbo who is now in her second term as Representative of Marikina’s 2nd Congressional District and Vice-Chairperson of the powerful House Committee on Appropriations. She gave a partly written, partly extemporaneous, mind-tickling and humorous speech that elicited wide smiles and laughter from the audience. She particularly mentioned the UPSEAA Viber group and its dynamic exchanges, and later mentioned me and my occasional wild ideas — thanks Congresswoman Stella.

Batch 1997 performed a group song number while Batch 1972 gave a fast-paced dance number with mini-fireworks and brought the house down in admiration and appreciation. There was lots of food, lots of raffle prizes courtesy of many corporate sponsors, and a live band and professional events organizer. Really fantastic and successful homecoming event. Thank you, batches 1997 and 1972, and thank you UPSEAA.

During the PEB in New York, one video showed Transportation Secretary Jaime Bautista saying that his department will launch “programs that will provide our passengers with accessible, affordable, convenient and safe public transportation.”

In the panel of the infrastructure team, Secretary Bautista discussed the six big railway projects — mostly under Public-Private Partnerships (PPP) — that are being facilitated by his department. These are good projects, they will transport hundreds of thousands of passengers daily. But most passengers do not live near train stations, they live many kilometers away from the stations and they cannot drive by car or motorbike to the stations because there are no parking spaces in those stations. They must take public transport and the cheapest would be the motorcycle taxis (MCT).

Currently there is a virtual MCT duopoly by Angkas and Joyride. A third and small player, Move It, has partnered with Grab and allies of the duopoly have launched their opposition to the partnership. These groups claim to be pro-commuter, but commuters and passengers are more interested in having more choices, more options, more competition. By limiting the competition to the virtual duopoly, commuters are penalized with less choices. There should be three, four, or five major competing players in the market and not just two.

This coming Wednesday, Sept. 28, the World Taxpayers Association (WTA) will hold the Asia Regional Taxpayers Forum online. It was supposed to be a face-to-face meeting and forum but was changed to a virtual meeting.

Among the speakers at the event will be John O’Connel, Chair and President of WTA. John is a young dynamic leader who used to head the Tax Payers Alliance (TPA) in the UK. Former Presidents of WTA were Bjorn Tarras-Wahlberg of the Swedish Taxpayers Alliance, and Troy Lanigan of the Canadian Taxpayers Federation.

The other speakers in the Asia regional forum will be: Liu Fengjiang of the Chinese Taxpayers Association Alliance, Raymond Ho of Hong Kong Momentum 107, Gobinda Sharma of the Nepal Taxpayers Welfare Society, Raza Ullah of the Alternate Solutions Institute (Pakistan), and this writer.

Then on Sept. 29-30, the Asia Liberty Forum will be held at Shangri-La The Fort, sponsored by the Atlas Network (US) and the Foundation for Economic Freedom (FEF). Among the speakers there are several friends from FEF like Romy Bernardo and Dindo Manhit, Basanta Adhikari of Bikalpa in Nepal, Anthea Haryoko of CIPS in Indonesia, Simon Lee of Unsubject Me and formerly with Lion Rock Institute, Hong Kong, Ali Salman of PRIME Institute in Pakistan, and Adinda Muchtar of The Indonesian Institute.