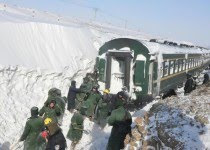 When I attended an international training on "Sustainable Agriculture" in Sweden in 2003, we have a batchmate from Harbin, north China. He told us that he's used to -20 C during winter, similar to what Lund, Malmo, other southern Sweden cities would get.

The winterstorm that hit China this week is worse, -28 C, and even down to -32 C, and the snow is up to 3 meters perhaps, practically covering a train, as shown in the picture.

The same biting cold and heavy snow was also experienced in Korea, one report said "the worst in 70 years".

Though snow stopped in most parts in the north by yesterday morning, heavy snowfall and biting cold continued in parts of Inner Mongolia, Hebei and Shandong.
The heavy snow led to the delay of 13 passenger trains in Inner Mongolia, and forced the closure of all four airports in Shandong, as well as 30 state highways in northern China.

Beijing Capital International Airport, with more than 1,400 flights scheduled to take off yesterday, reported severe disruptions. By 4 pm, 485 flights took off, 690 flights were delayed for an average of 90 minutes, and 98 flights were canceled, an airport spokesman said.

A train from Harbin to Baotou ran into snow more than 2 m high near Jining in Inner Mongolia on Sunday and passengers were evacuated only yesterday.
All 15 carriages were buried in snow and more than 1,400 passengers were stranded in the train without lighting and heating. Food and drinking water were also in shortage, the local railway bureau said....
Posted by Bienvenido Oplas Jr at 8:24 AM