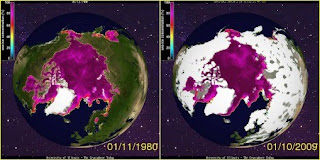 Picture here of snow in the northern hemisphere, January 1980 vs. January 2010 or 30 years apart.

Below are some of the news reports about global cooling.

A UN IPCC scientist is honest enough to recognize that there is a pause to warming, that there is natural climate cycle of warming-cooling, vs. the dogmatic IPCC assertion of "unequivocal, unstoppable man-made warming". Dr. Latif refers to the current situation as a "mini-ice age", and is projected to last for the next 30 years,
http://www.dailymail.co.uk/sciencetech/article-1242011/DAVID-ROSE-The-mini-ice-age-starts-here.html

Then the news that "December 2009 the 2nd snowiest December on record" since 1966,
http://wattsupwiththat.com/2010/01/10/second-snowiest-december-on-record-in-the-northern-hemisphere/

In Florida alone, here are some news reports.

HOLLYWOOD, Fla. -- Record lows across South Florida are literally freezing the invasive iguana in its tracks. Kamikaze iguanas, plummeting from their treetop perches, have long been a Floridian urban legend. On Wednesday morning, Local 10 caught the free-falling lizard on tape.
--------

The Florida manatee is one species impacted by extremely cold weather. Exposure to water temperatures below 68 degrees for long periods can cause a condition called manatee cold-stress syndrome, which can result in death....

Rats! Cold driving them into homes

WEST PALM BEACH--Rodents are trying to flee the cold and they are looking at your home as a nice place to stay warm during our freezing temperatures.
In Tampa, rats have infested an apartment building there.
---------

In other parts of the world...

Livestock being frozen to death in their thousands

THOUSANDS of farm animals face being frozen to death as Scotland experiences its worst winter weather in almost 50 years, farmers have warned...
------

Pig farmers rush to save hundreds of pigs trapped beneath a snow-laden roof in northern Jutland
Among the multitude of problems caused by the heavy snow fall in Jutland, has been the collapse of a pig sty roof, trapping 800 pigs beneath it.
---------

Cold wave claimed 157 lives across north India even as its intensity slightly abated today after the sun came out lifting the fog and raising temperature in parts of Punjab, Haryana and Chandigarh.
--------

In another discussion list, I asked a friend who mentioned his Filipino scientist friend who used to work for IPCC, to produce a chart, even just one chart, comparing IPCC temperature projections, say from 1990 or 2000 to 2009, vs. actual global temperatures, on those years. He did not reply. I bet IPCC scientists and writers cannot produce such chart. Because their predictions say "rising temperature" when actual temps are falling.

It is very basic scientific ethics: theory and data must conform with each other.
If they contradict, theory must give way, data must prevail. And such "theory" must be abdicated and thrown away, go back to being a hypothesis, to be subjected to a battery of further tests.

But AGW is not a theory. It is a cult, a dogma.
Even if data results contradict it, people still believe it.
that's why it's a cult.

Another friend asked, "With global cooling, what can we do about it?"
Simple: get the most stable, most reliable, and cheapest power and electricity sources for heating and prepare for even worse cooling in the coming years.