Posting here three short papers I wrote about the subject.

A friend asked me about my opinion about this article,

How did we get to where we are?
By Dr. Bernardo Villegas
Philippine Daily Inquirer
First Posted 02:07:00


...Then why is the Philippines poor? The main answer is that for 30 long years after World War II, our leaders adopted economic policies that fostered an inward-looking, import-substitution industrialization based on protectionist, anti-market and ultra-nationalist ideologies not very different from what most Latin American countries implemented with the same dire consequences. Overreacting to our colonial past (as did the Latin Americans), we equated economic development with capital-intensive industrialization that did nothing to address our massive unemployment and underemployment problem. The worst consequence of these failed economic policies was not the eventual demise of the so-called infant industries that never grew up. The most devastating result was the almost criminal neglect of countryside and agricultural development. Because we used up our capital resources in the white elephants of the manufacturing sector, there were no resources left to build farm-to-market roads, irrigation systems, post-harvest facilities, seaports and airports that were essential to making our small farmers productive....

I side with Dr. Villegas here. International trade already happened even before the Philippine State was formed, even before the Spaniards came. At that time, what was the population of the entire archipelago, half million?

"Hey, do your work well, there is a super-huge market out there around the world where you can bring your products. There is also a super-huge number of suppliers of cheaper raw materials and machineries that you need to improve your productivity."

Whereas the reverse message is signaled by import substitution:

"Hey, no need to improve the quality of your products, no need to innovate much, you got no competitors. We in government will protect you from external competition. Let the poor Filipino consumers endure your products, no matter how lousy and how expensive they are, consumers have no other options anyway, unless they go abroad and buy those stuff themselves."
(2) Last January 04, 2010, I wrote this:
ASEAN Free Trade Area

Free trade rocks! And it's one of the best news stories to start 2010.

Citizens of 6 (of 10) member-countries of the ASEAN -- Indonesia, Philippines, Thailand, Malaysia, Singapore and Brunei -- will expect zero tariff for their exports to each other starting January 1 this year. This is under the Common Effective Preferential Tariff - ASEAN Free Trade Area (CEPT-AFTA). See the ff links:
http://www.aseansec.org/24146.htm,
http://www.businessmirror.com.ph/home/top-news/20459-atiga-for-asean-6.html.
http://globalnation.inquirer.net/news/breakingnews/view/20091231-244870/Zero-tariffs-for-Asean-6-starting-January-1,
The other 4 member-countries of the ASEAN -- Vietnam, Cambodia, Laos, Myanmar -- will enjoy zero tariff for their exports to any of the 6 countries mentioned, but their imports from those 6 neighbor countries will still be subject to some minimal tariff, about 3 percent on average, until 2015. By 2016, the entire ASEAN will have zero tariff for all 10 member-countries.

This is one of those very rare occasions that we have to congratulate our respective governments in Asia. Although in the case of Singapore, it's been conducting bilateral free trade agreement (FTA) with so many countries. In which case, HK is still a more free marketer economy because it simply adopted the unilateral trade liberalization policy. Zero conditionality, zero FTA negotiations with any other country, big savings in otherwise hiring expensive "trade negotiators".
(3) Today:
China Biggest Exporter Around the World 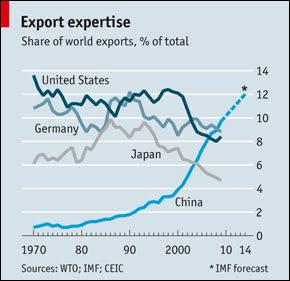 This is an interesting chart. The share of total exports by the US, Germany and Japan are slowly declining, that of China's is increasing at a fast pace. It was 10 percent of total world exports, vs. the US' 8 percent and Germany's 9 percent.
source of chart: http://www.economist.com/businessfinance/displayStory.cfm?story_id=15235078&source=features_box_main
With the ASEAN-China FTA and ASEAN being a big market with 700+ million combined population (about the combined population of the US + EU15), China's share of global exports will keep rising.
The way the US is making it more bureaucratic (against terror threats), if not more protectionist, its foreign trade will be adversely affected, if not be adversely affected. Note that the significant decline in US' global exports share happened almost simultaneously with the 9/11 attacks and the high-profile anti-terror procedures of the US.
------
See also:
Free Trade 8: Global RIce Price, May 13, 2008
Free trade 9: Parallel Importation of Medicines, May 22, 2008
Free Trade 10: More on Unilateral Trade Liberalization, July 15, 2008
Free Trade 11: Global Petition, Keynes, March 19, 2009
Free Trade 12: Trade and World Peace, April 28, 2009
Free Trade 13: Benefits of Dumpiing, June 16, 2009
Posted by Bienvenido Oplas Jr at 3:15 PM