Price control is price dictatorship. Or one form of product coercion, or industry over-regulation.

There are many factors why the price of a particular commodity or service is deemed “expensive” and “inaccessible”, especially to the poor. Foremost of which are (a) cost of production, including the cost of innovation and R&D, (b) cost of marketing and promotion, (c) cost of transportation, storage, distribution and retailing, (d) cost of taxes and regulatory fees by governments (national and local), (e) mark-up by producers and traders, depending on the extent of competition among suppliers and producers. Absence of any competition (monopoly) or just limited competition (oligopoly) means bigger mark-up.

Very often, government regulations directly or indirectly, determine the extent of competition or lack of it, in a particular industry or sector. Government franchising, for instance, creates monopolies. An electric cooperative, or a cable tv operator in a particular province or region, or tricycle route in a particular village or municipality, are given monopoly franchise by certain government agencies.
The drug price control policy is now five and a half (5 ½) months old since its implementation last August 15, 2009. There has been no serious study or assessment made by the implementing agency, the Department of Health (DOH) yet, on whether the policy has attained its primary objective – to make branded, popular and highly saleable medicines produced by multinational pharmaceutical companies, become more affordable and more accessible to the poor.

And yet, there are policy pronouncements by the DOH to issue another round of price control. Like this news report, “Therapeutic drug price cut considered”, January 28, 2010, http://www.bworldonline.com/main/content.php?id=5329

A Singaporean physician has written a number of observations about this Philippine government policy. The latest of his discussion was “The ultimate domino effect of ignorance”, January 28. 2010,
http://www.whitespacelab.com/2010/01/28/the-ultimate-chain-reaction-of-ignorance/ 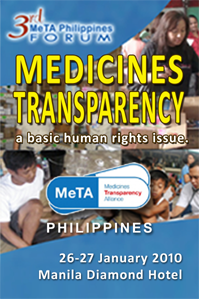 On the proposed round 2 of drug price control by the DOH reported in the news story above, the occasion was during the 3rd Medicines Transparency Alliance (MeTA) Philippines Forum this week, January 26-27. I have attended the 2-days forum held at Diamond Hotel in Manila. Drug price control, aka maximum retail price (MRP), was extensively discussed in the morning session of day 2, last January 27. The five speakers in that panel were leaders from the Cancer Warriors Foundation (CWF), Health Action Information Network (HAIN), Philippine Chamber of Pharmaceutical Industry (PCPI, the alliance of local pharma companies), the European Commission Technical Assistance - Health Sector Policy Support Program (ECTA-HSPSP), and Philippine Health Insurance Corporation (PhilHealth).

Drug price control is explicitly supported by the CWF leader, was deemed “important but not enough” by the leaders of HAIN and ECTA, was shot down by the PCPI leader, while the PhilHealth official has some preliminary but incomplete assessment of the policy yet.

Succeeding discussions during the open forum showed that the price control policy rests on a hollow base. A speaker from a medium-size drugstore chain, for instance, said that contrary to expectations that the volume of branded medicines by multinational pharmaceutical companies that were hit by the policy will increase, the lady said that their sales of such medicines even suffered a decline of 3 percent from mid-August 2009 to late January 2010. And why is this so?

It is because those who used to buy the affected drugs did not increase their purchase of said products. If they were taking one tablet per day, a 50 percent mandatory price cut did not cause them to buy two tablets per day. They just saved money. Meanwhile, the poor still found the 50 percent price cut not enough. Take amlodipine (most popular, branded drug is “Norvasc” made by Pfizer). Before the MRP, it was sold at Php44 per tablet. But the cheapest generic amlodipine, same dosage, was already selling at Php8 per tablet. So even at coercively reduced price of Php22 per tablet, it is still expensive for those who get another drug for the same disease at only Php8, or even Php11 per tablet.

In short, MRP benefited the rich and middle class, not the poor, who are the main target beneficiaries of the policy. Competition among pharma companies in the country made sure that poorer households and patients would have some alternative drugs at a lot cheaper price compared to branded and patented drugs. Besides, pharma industry leaders (both multinational and local) who spoke during the forum, pointed out that some small, local generic manufacturers whose drug prices are only about 70 percent lower than the branded products prior to MRP, suffered erosion of their market share as some of their customers shifted to the branded drugs that experienced mandatory price cut of 50 percent.

An official of another medium-size drugstore chain that I talked to said that their sales showed some increase in the volume of the branded drugs by multinational companies that were hit by MRP. Thus, local generic manufacturers were also badly hit by the policy. All drugstore managers (both chain stores and independent small ones) that I talked to during the forum said their sales as drugstores were badly hit too. Since they were advised by the DOH to keep their percentage mark-up, say 10 percent, before and after the MRP, their profit was affected. At 10 percent mark-up, they make Php5.00 gross profit from a drug selling at P50. When that drug’s price was forced by the government to be sold at only Php25, now they make only Php2.50 gross profit. And since drugstores are also forced by two laws to give mandatory 20 percent discount to (a) senior citizens and (b) persons with disabilities, the small mark-up they make from average customers can be wiped out by the mandatory 20 percent discount that the government mandated that drugstores alone should shoulder.

The uncontrolled passion for price control may be understandable if the intended target beneficiaries indeed benefit. But if it did not, such uncontrolled passion is no longer guided by the logic of economics and healthcare for the many. It is simply guided by politics and the deep desire for strong power to regulate other people’s lives and business.
Posted by Bienvenido Oplas Jr at 10:36 PM