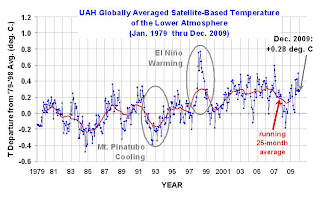 This chart is from www.drroyspencer.com.
The numbers for this chart are also indicated in that site.

It shows the following:

3. From 2002 to 2009, there was even a global cooling of about 0.1 C
Despite the fact that CO2 concentration in the atmosphere keeps rising.

The IPCC received research inputs from more than 2,500 scientists around the world, but only a few wrote the assessment report. And some of those few scientists were caught in the "climategate" emails to to have manipulated and falsified climate data to "prove" AGW.

The above chart also shows that Mt. Pinatubo eruption did not result in warming but COOLING of the world, by about 0.5C for nearly 3 years. Mt. Pinatubo's dust, ashes and gases covered the Earth's atmosphere that sunlight could hardly penetrate the Earth's surface and ocean, resulting in cooling.

The earlier warming, from about 1850 to 1998, was a result of natural climate cycle (what is now bastardized as "man-made climate change/global warming"). The Earth plunged into a little ice age (LIA) of global cooling for nearly 400 years, from 1400 to 1800, especially during the "Maundeer Minimum" and "Daton Minimum". Prior to that, the Earth baked for almost 600 yrs of global warming, during the Medieval Warm Period (MWP), a period much warmer than the recent warming.

The IPCC and Al Gore lying machines were saying:

1. No MWP that happened, current warming is unprecedented, it happened only after the industrial revolution and human modernization
2. Current warming is "unequivocal" and unstoppable, we can only mitigate the level of warming.
3. CO2 is an evil gas mainly responsible for warming. So don't breath in front of your spouse and children, you might poison them.

Climate change or climate cycle is natural, it's never man-made or caused. There were periods of global warming-cooling- warming-cooling in the past. Why? Because there are a dozen plus of factors that affect the earth's climate -- the Sun, galactic cosmic rays, volcanoes, aerosols, biosols, Pacific decadal oscilation (PDO), atlantic oscillation, water vapor, clouds, the ocean, Earth's revolution around the Sun, etc.

It is important that we seek the truth, to prove who is WRONG and who are the LIARS.
Who are the liars? It's clear -- UN IPCC, Al Gore, the big environmentalist groups like Greenpeace and WWF, almost all governments that want more carbon taxes, more environmental regulations, more carbon tariff, more climate bureaucracies, more ecological central planning.

That is why in the language of the above group, all the factors that I mentioned above that contribute to the Earth's climate are "secondary or insignificant" factors. For them, there is only ONE major cause, and that is CO2. And our modernization, our cars, our malls, our big buildings, our huge electricity consumption being logged online often, etc., is destroying the planet.

Sorry for the strong language but I have little or no respect whatsoever to those leaders of the warming scam.
-------

More than 31,000 American scientists signed the "Petition Project" initiated by Dr. Richard Lindzen. I have a hard copy of that list. Those are 31,000+ American scientists only, don't include Canadian, European, other scientists, who declared that "man-made warming is wrong, that CO2 is not harmful to human", etc.

The gas that we exhale is not soot or methane or lead or what have you. It is CO2. If CO2 is harmful, then we should not talk and breath close to other people, say our spouses, because we might poison them with the "evil" gas that we exhale everytime we breath.

On this alone, we can see the lies and evil being spread by the top warmers like Al Gore and the IPCC.
--------

The vaunted "IPCC transparency" is a joke.
here are 2 of the many reports (a bit long).

The recent hacking of the University of East Anglia’s Climatic Research Unit (CRU) computer system has led to the release of hundreds, if not thousands, of e-mails which — if real — reveal the tactics and motivations of some of the top Intergovernmental Panel on Climate Change (IPCC) scientists.

While it is too early to tell just yet, there seems to be considerable damning evidence that data have been hidden or destroyed to avoid Freedom of Information Act (FOIA) data requests; data have been manipulated in order to get results that best suit the pro-anthropogenic global warming agenda of the IPCC; e-mails that contain incriminating discussions are being deleted. And, on the bright side, we skeptics seem to be quite a thorn in the side of the IPCC....

How IPCC scientists interfere with publication of inconvenient scientific results

In this article, reprinted from The American Thinker, two eminent Professors reveal just one of the many seamy stories that emerge from the Climategate emails. A prejudiced journal editor conspires with senior IPCC scientists to delay and discredit a paper by four distinguished scientists demonstrating that a central part of the IPCC’s scientific argument is erroneous.

The Climategate emails from the Climatic Research Unit at the University of East Anglia in England have revealed how the normal conventions of the peer-review process appear to have been compromised by a Team of “global warming” scientists, with the willing cooperation of the editor of the International Journal of Climatology, Glenn McGregor....
-------

I am aching to see this chart from the IPCC:

Here's another challenge for the warmers too:

Get the most sophisticated computer climate models in the world, whether by NASA or NOAA or UK Met or whatever government. Then ask them to predict with full confidence, the weather and temperature range in their country or of the world for the next week or next month.

Can they make such prediction with full confidence? I really doubt it.

If they cannot predict the weather and temperature range in the next 10 days, and their models in 2000 failed to predict the actual temperatures in thhis decade, why have we been fooled that their computer models can predict the climate and global temperature 100 years from now?
Posted by Bienvenido Oplas Jr at 3:35 PM