When we buy hamburger or pasta or roasted chicken, we do not ask who are the owners, presidents and board of directors of McDo, Jollibee, Burger King, Pizza Hut, Andok’s Manok, etc. We just buy the food because of the brand that those food corporations have built through the years. It is a brand or image of safe (non-poisonous) and delicious (need not be nutritious) food at a particular price range.

The same can be said when we buy a car (brand new or second hand), a cell phone, a tv, a computer, gasoline, etc. We do not ask who are the Presidents, major owners and Board of Directors of those companies, we buy their products based on the brand and corporate integrity that they have built which the public has accepted and respected.

This situation largely explains the weak party-system in the country. The existence and institutionalization of the “party-list” system further exacerbated this situation. In the last May 2010 elections for instance, nearly 500 different party-lists – on top of existing dozens of national and provincial political parties – registered with the Commission on Elections (Comelec) and 187 were accredited.

The multitude of thousands of politicians from hundreds of political parties promising the moon and the stars only succeeded in confusing the voters and exacerbating the personality-oriented politics in the country, never in developing principle- and philosophy-based politics.

In the recent post-election forum organized by the Ateneo School of Government (ASoG) entitled “Leaning Lessons, consolidating gains: the 2010 national elections” last June 18, 2010, I raised some of those issues during the open forum and during the workshop. 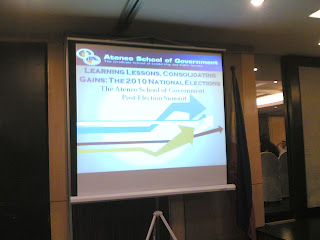 It was a good forum. Among the speakers were Atty. Rene Sarmiento of Comelec, Dr. Mahar Mangahas of the Social Weather Stations, Mr. Ramon Casiple of the Institute for Political and Electoral Reforms (IPER), Atty. Eduardo Nuque of the Legal Network for Truthful Elections (LENTE), and Police CS Ager Ontog of the Philippine National Police (PNP). 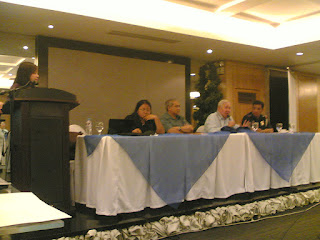 I also commended the PNP – one of the few instances that I do so – for having a generally peaceful elections. Here is the PNP data for the decline in election-related violent incidents (ERVIs): from 249 incidents in the 2004 elections to 229 in the 2007 elections and only 180 in the recent 2010 elections. 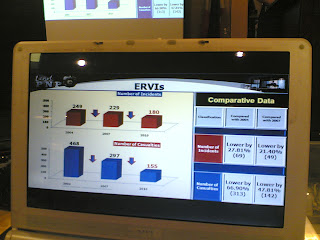 Prior to the recent elections, the PNP was among the most distrustful agencies in the government. It has improved its image, I think, after the elections last month. It took a long time for the PNP to destroy and continue destroying its reputation. It will take also a long time to regain that reputation. It will need a series of confidence-building measures and proof to achieve this. The recent elections has contributed to that confidence-building.

I like the idea that the PNP also accosted and arrested some of its own personnel who violated the Comelec gun ban. Out of the 3,182 people who were arrested, 108 of them were PNP personnel (those carrying their firearms while off-duty and wearing civilian clothes). Some military personnel were likewise arrested for the same offense. 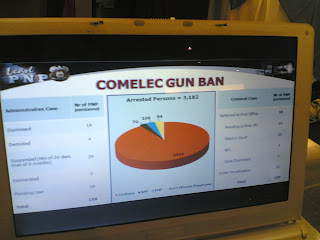 Picture below during the workshop discussions. Beside me is Byron Abadeza of the Transparency and Accountability Network (TAN). 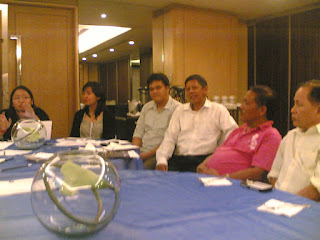 A number of participants in the workshop group like the idea that it should mainly be the political party, like a corporation, and not the politicians, that will be directly accountable to the people and voters. The politicians will be accountable to their party. The party will discipline its politicians, apply severe disciplinary and even criminal charges to their erring members, so that the party can show and retain its reputation to the public. The same way that a big restaurant with hundreds of food chains across the country cannot afford to have even a single case of food poisoning in any of its food outlets in the country.

I hope that more civil society leaders will take up this topic and hopefully, support it.
Posted by Bienvenido Oplas Jr at 4:32 AM