The temperature anomaly or "divergence from average temp." (1979-98 base years) last month was 0.53 C. See chart from www.drroyspencer.com.

I watch this monthly update from Dr. Roy Spencer's blog. This known climatologist from the University of Alabama in Huntsville (UAH) is doing that kind of analysis, among his other work. In the past, I really wished to meet the man himself. 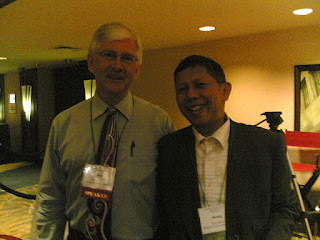 And I did meet him, 3 weeks ago in Chicago, during the Heartland's 4th International conference on climate change (ICCC). He was one of the keynote speakers in the 3-days event. One of his major arguments is that clouds greatly affect the world's climate, and he is interested if initial warming by CO2 will result in "positive feedback" (more warming) or "negative feedback" (less warming, if not cooling, due to the presence of more clouds).

For those following the global warming-cooling debate, visiting his site, at least once a month, is a rewarding and mentally-challenging thing to do.
Posted by Bienvenido Oplas Jr at 4:12 PM