Former US Vice-President Al Gore spoke in a big forum in Manila the other day, June 8, dubbed “Al Gore Live in Manila”. I did not attend of course, knowing that this politician will peddle political science masqueraded as climate science.

Since I did not attend, I checked some newspapers in Manila yesterday about the event. Here are some of them, along with some quotes on those reports. I did not catch the other papers though.

“…images and charts hammering down apocalyptic warnings: ancient glaciers receding if not totally vanishing in a matter of decades, lakes and rivers drying up, stronger storms, droughts in areas where there used to be none, and flooding in towns… global warming and resulting “shifts in the seasons” have led to the resurgence of diseases that were once declared under control, and the emergence of new viruses, as in the case of SARS (Severe Acute Respiratory Syndrome).”

“…Gore pointed to Typhoon Ondoy (“Ketsana”) which struck the Philippines on September 26, 2009, as one of the examples of global warming’s impact. The typhoon dumped 341 mm. of rainfall in Metro Manila and outlying provinces in just six hours. Many low-lying cities and municipalities were flooded with 20 feet of water and remained so for a week.”

“…warmer oceans are resulting in more numbers of stronger hurricanes and larger volumes of rainfall. "That’s why we’re getting stronger ocean-based storms... You had a series of giant typhoons. It was just a horrible situation you had to endure," he said flashing photos of flood-stricken Luzon which was hit by tropical storm Ondoy late last year.”


(4) Gore to Pinoys: Take a stand on climate change

“A clear manifestation of global warming, he said, the occurrence of storms worldwide.
“It has been increasing the odds of experiencing or having more of these giant storms in our respective countries as what scientists say,” Gore said.”

Much of news reports and literatures of the warmers are narrative, not quantitative. One can take a picture of one side of the north pole or the south pole as having “less ice than usual” and make a 3 pages or more “special report” about it. But if one is to report about the ice area of the whole north pole or south pole, you need to produce a chart with numbers for the whole area.

Al Gore and the UN IPCC are fooling us with their climate political science. There is no “catastrophic man-made global warming” happening like vanishing ice and glaciers, continuously-rising global temperature, and so on.

Will just show 3 charts here – ice thickness in the Arctic (north pole), Antarctica (south pole) and global temperature based on satellite measurements of the Earth’s troposphere.


(2) Antarctica: No “catastrophic” loss of ice. 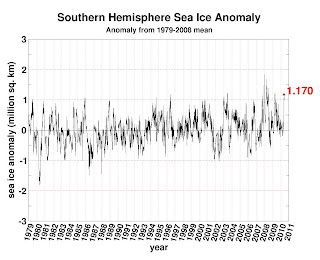 Conclusion: The Earth is not in danger. There is no need for more environmental regulations, more energy taxation, more global and national climate bureaucracies, more global climate meetings, more global ecological central planning.
Posted by Bienvenido Oplas Jr at 1:47 AM

Your blog has been recommended to us as an interviewee's favorite blog!

We would like to do an interview with you about your blog for Blog Interviewer.

We'd like to give you the opportunity to give us some insight on the "person behind the blog."

It would just take a few minutes of your time. The interview form can be submitted online here Submit your interview.