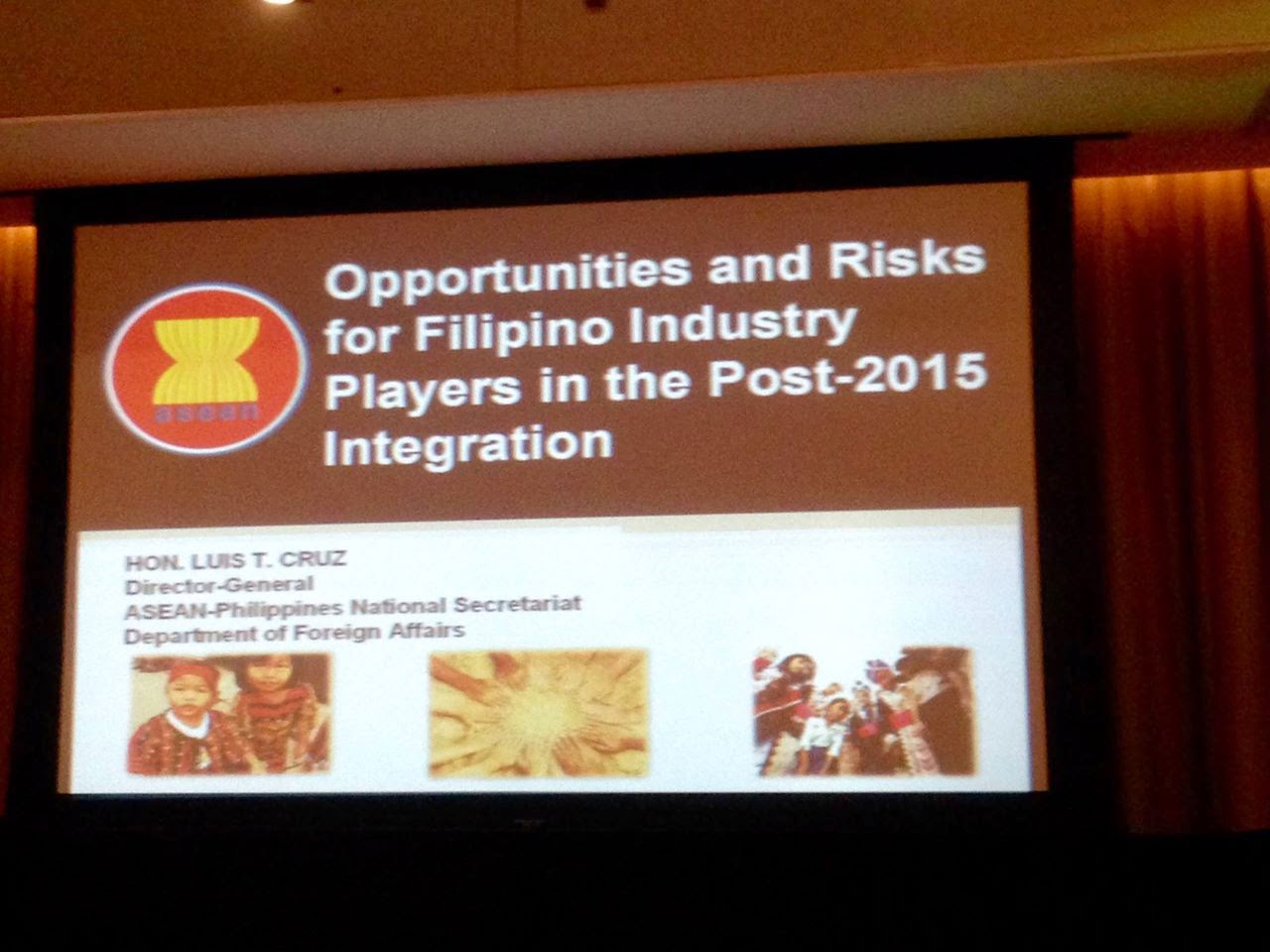 Last night, April 08, I attended a presentation by Luis T. Cruz, DFA Assistant Secretary for ASEAN Affairs, held at Shangrila Hotel Makati. He was one of two speakers. The next speaker after him was Laura Q. Del Rosario, DFA UnderSecretary for International Economic Relations, who spoke about the Asia Pacific Economic Cooperation (APEC) and PH commitments and engagements. 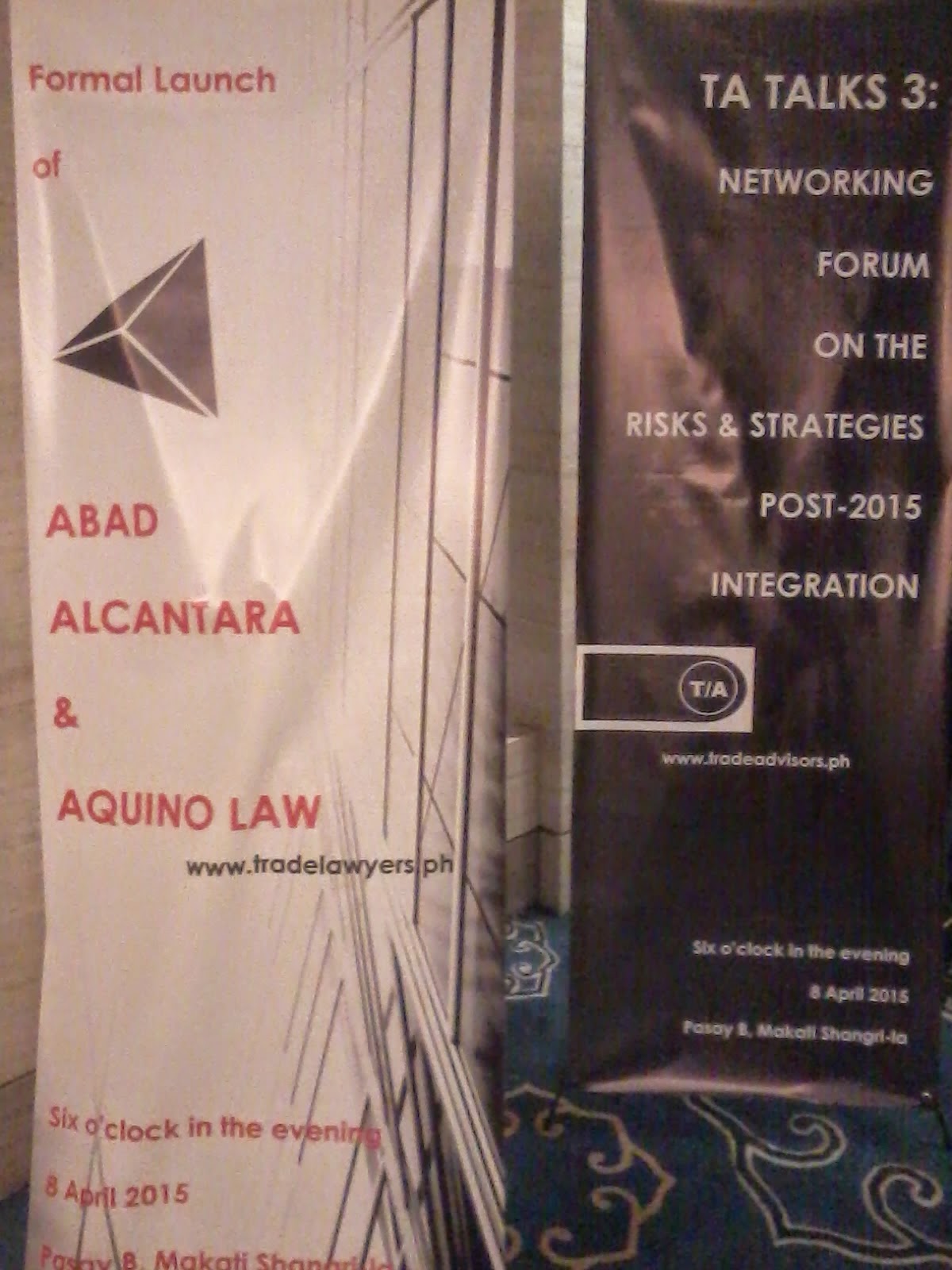 The event was a networking forum on Post-2015 Integration of the ASEAN, also the formal launch of AAA trade law office. I was invited by Atty. Tony Abad, one of the partners. His two partners in the new law office are Atty. Kristine Alcantara and Gretchen Aquino.

Below, ASec Luis Cruz speaking. Among the things he highlighted was that the  PH is well positioned to  seize opportunities in the ASEAN Economic Community (AEC) because (a) we have the fastest GDP growth in the region, (b) we are the  2nd largest in population, next to Indonesia, (c) we have the youngest workforce, average age  of only 23.3 years, second only to  Laos, and (d) consistent upward trajectory in global trade. 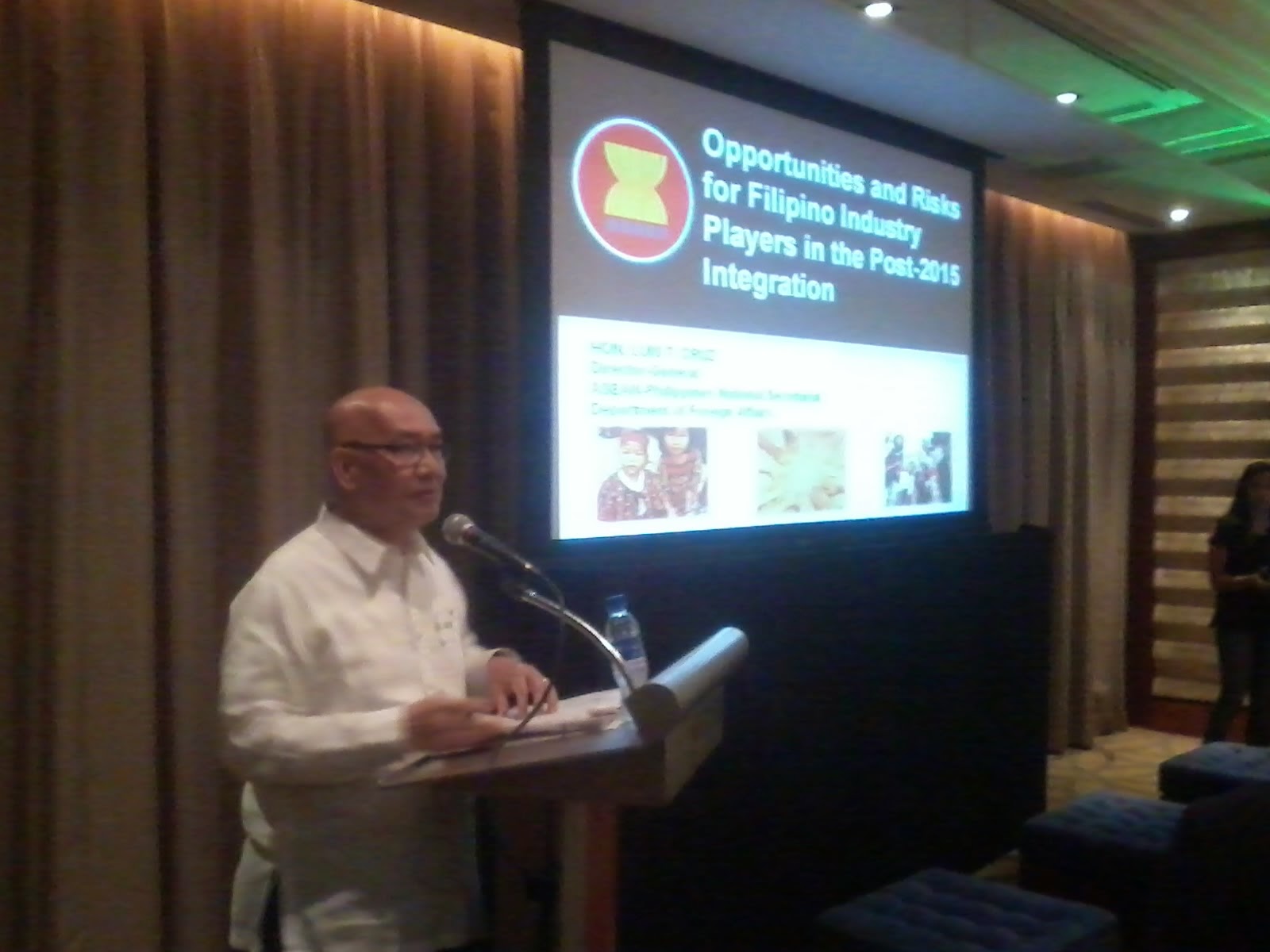 He added that based on the (HSBC?) study, the PH is expected to leapfrog to become the 16th largest economy in  the world by 2050. Possible. 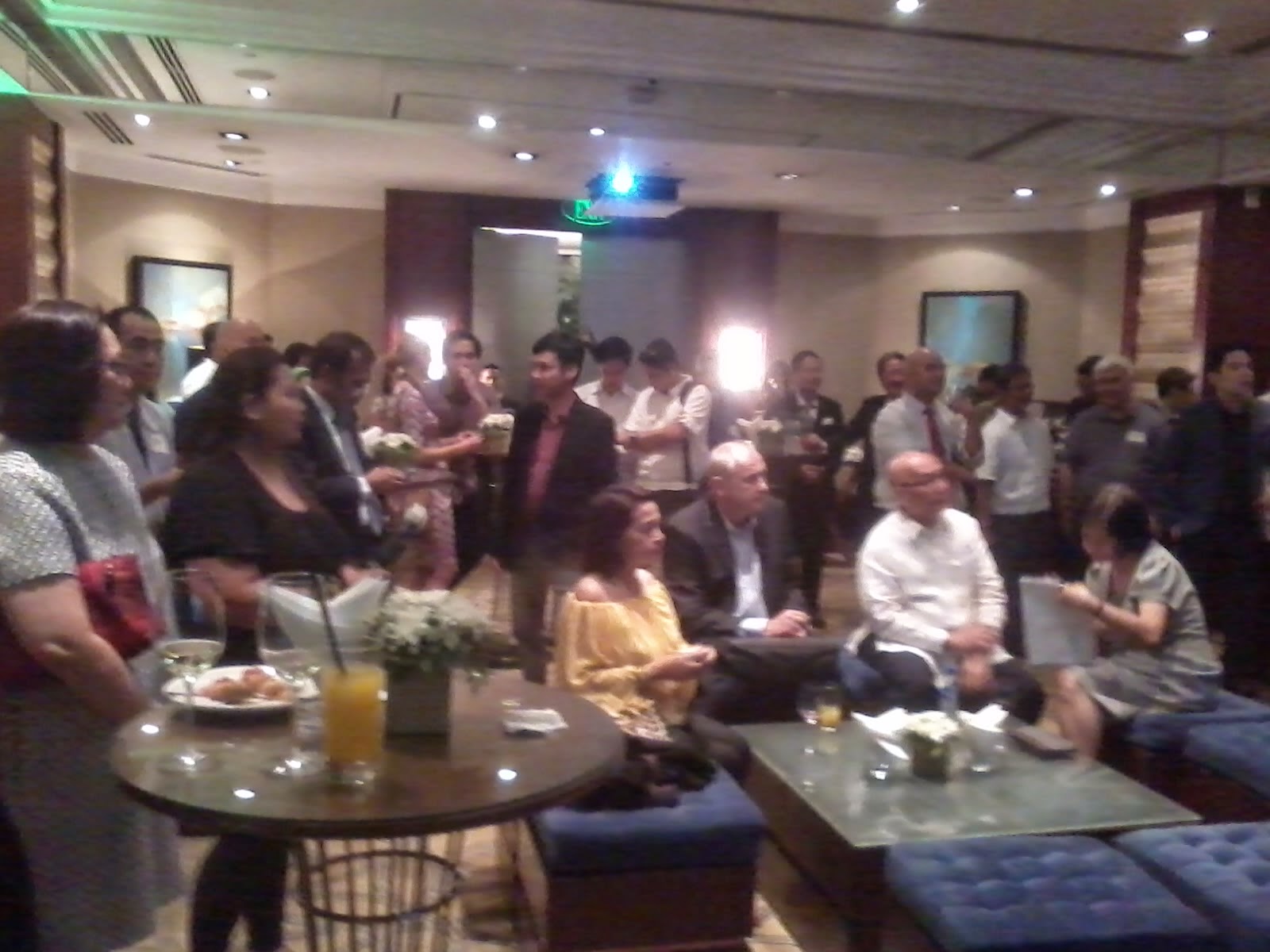 Good audience, After the two speakers from DFA and Tony spoke, there was an open forum. I spoke, introduced myself as a Fellow of the new regional think tank, South East Asia Network for Development (SEANET), based in Kuala Lumpur, but I am Manila-based. I mentioned that on April 22-24, or three days before the ASEAN  Summit in KL, there will be a big gathering of international and ASEAN-based NGOs called the ASEAN Civil Society Conference (ACSC) and the groups are mostly anti-liberalization, anti-deregulation, anti-privatization and anti-corporate and government-led trade and investments. SEANET exists to help balance this negative perspective by many NGOs and CSOs about trade and economic  integration in the region.

During the networking, before the forum  proper, I met a number of old and new friends Like here, from left: me, Erna Herlina of Indonesian Embassy, Larissa Jefferson of Australian Embassy, and Gene Perez of IRRI (formerly with IPO PH). Gene is a friend way back in the 80s in UP Diliman undergrad. 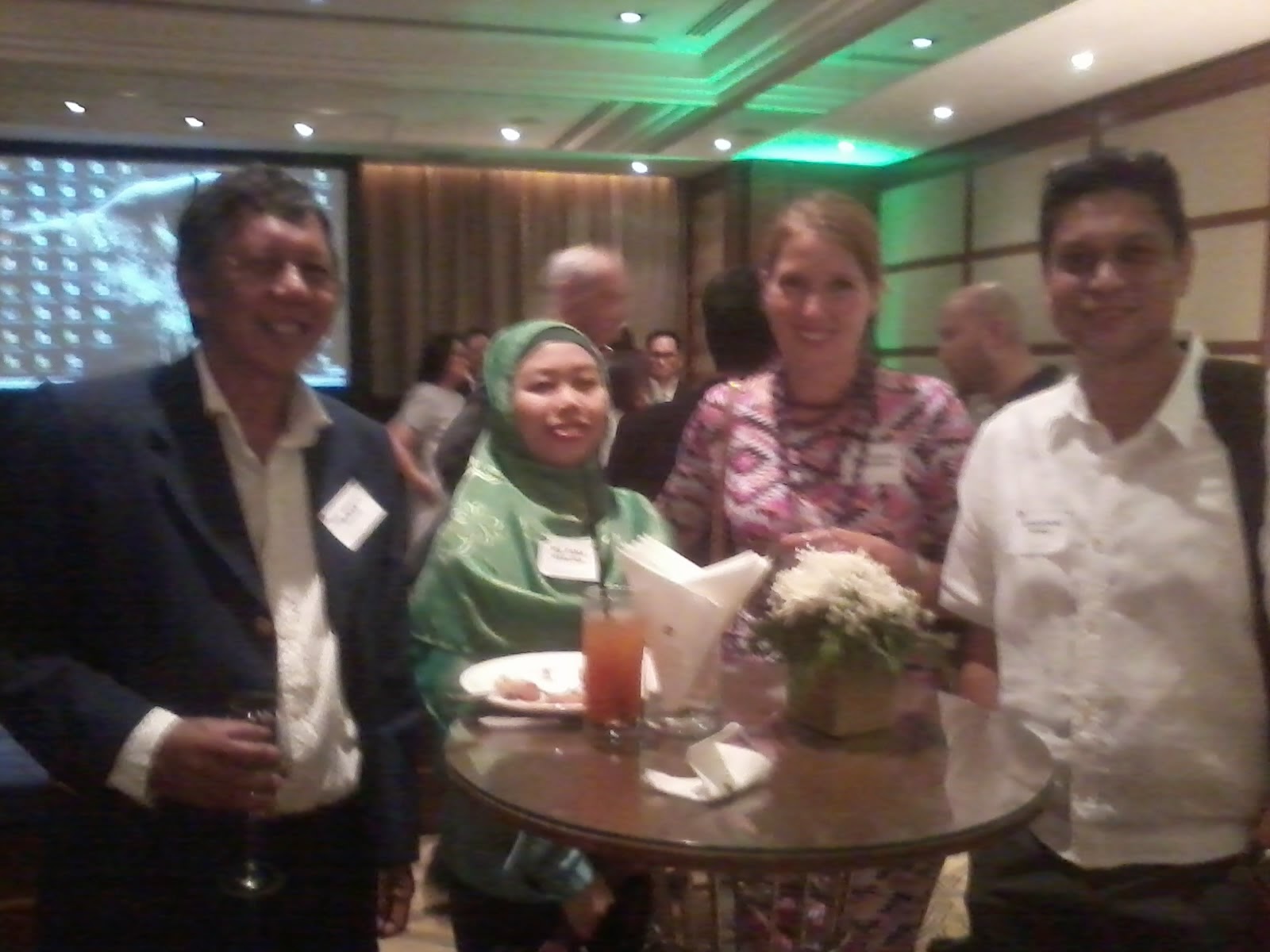 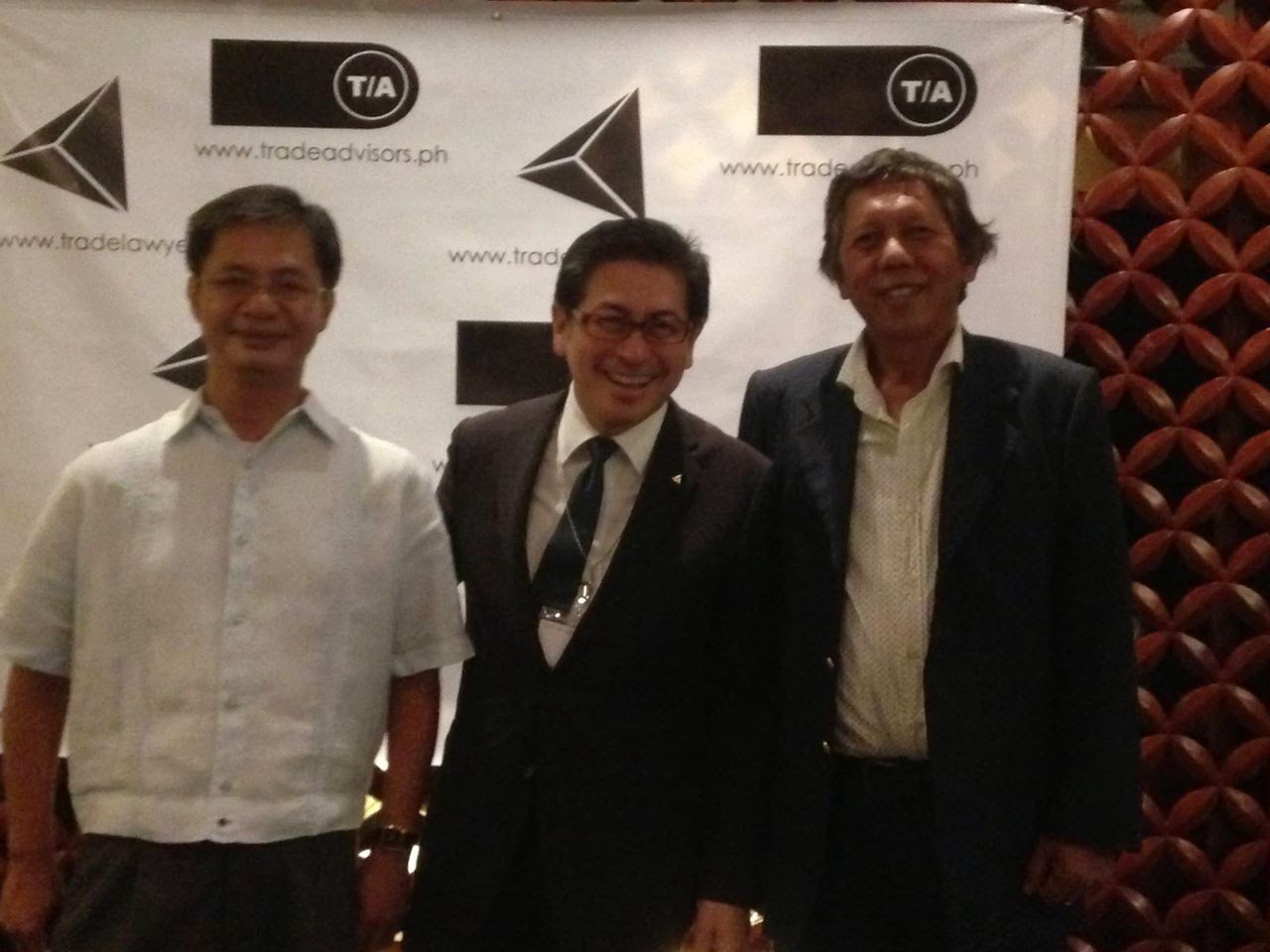 With Tony Abad (middle) and Gene Gregorio. During the forum, Tony said that it is no  longer a question of whether we say Yes or No to  economic integration + competition. It's already there in front of us, we have to accept it and adjust with  new threats and opportunities -- like expanded, bigger market for our goods and services, bigger choices for producers and consumers, etc. 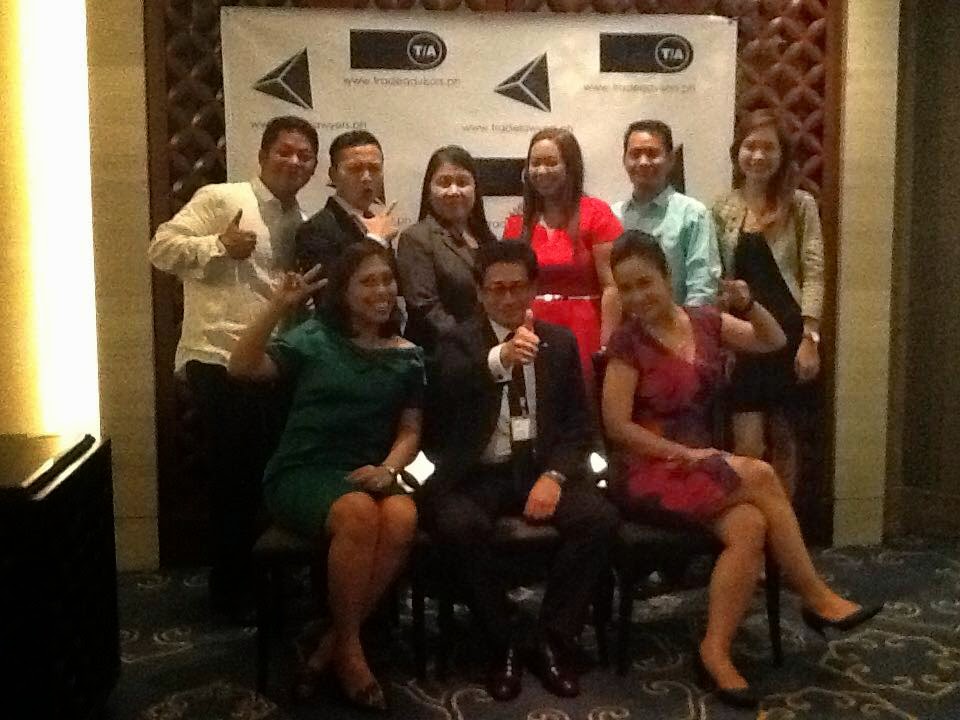