Competition Policy 5: Government as Creator of Monopolies and Oligopolies

A Philippine Competition Law is coming soon, around July this year, according to Sen. Bam Aquino in a forum that I  attended yesterday in Makati. The main speaker was a friend and  former teacher in Math Econ in  PDE in the late 90s, Dr. Joy Abrenica. 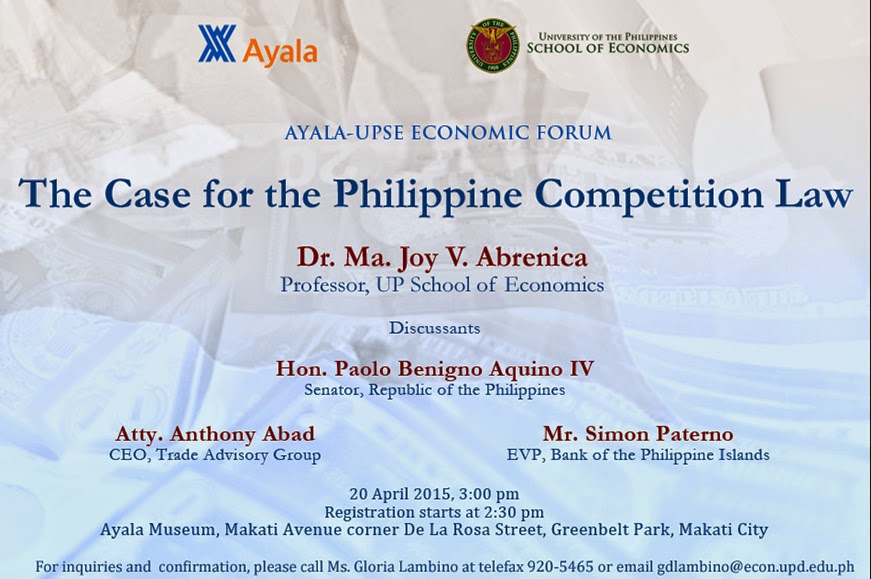 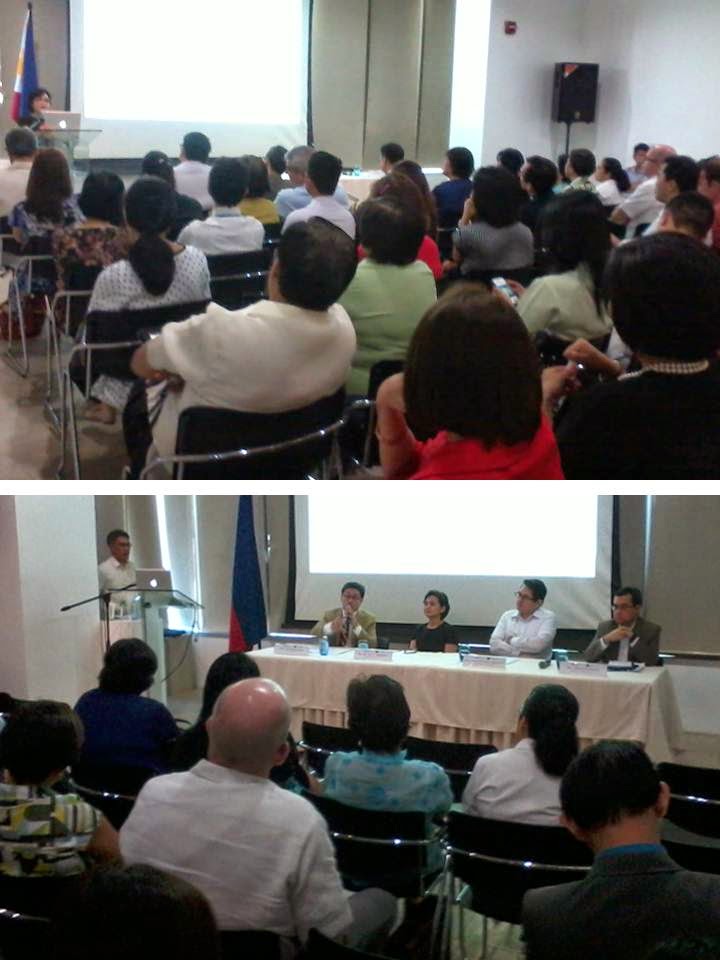 It was a well-attended forum. Mr. Jaime Zobel de Ayala was among the high corporate officials who attended  the forum from beginning to end.

Sen. Bam Aquino himself stayed all throughout too, even if  he was not the main speaker. During the open forum, he discussed many things, like the degree of lobbying from different sectors in his office and that of  other Senators. This is understandable as people express some apprehensions if their companies or sectors might be adversely affected by some provisions.

He said that they expect the Competition bill to become a law before the President delivers his 6th and  last State of the Nation Address (SONA) in late July 2015. 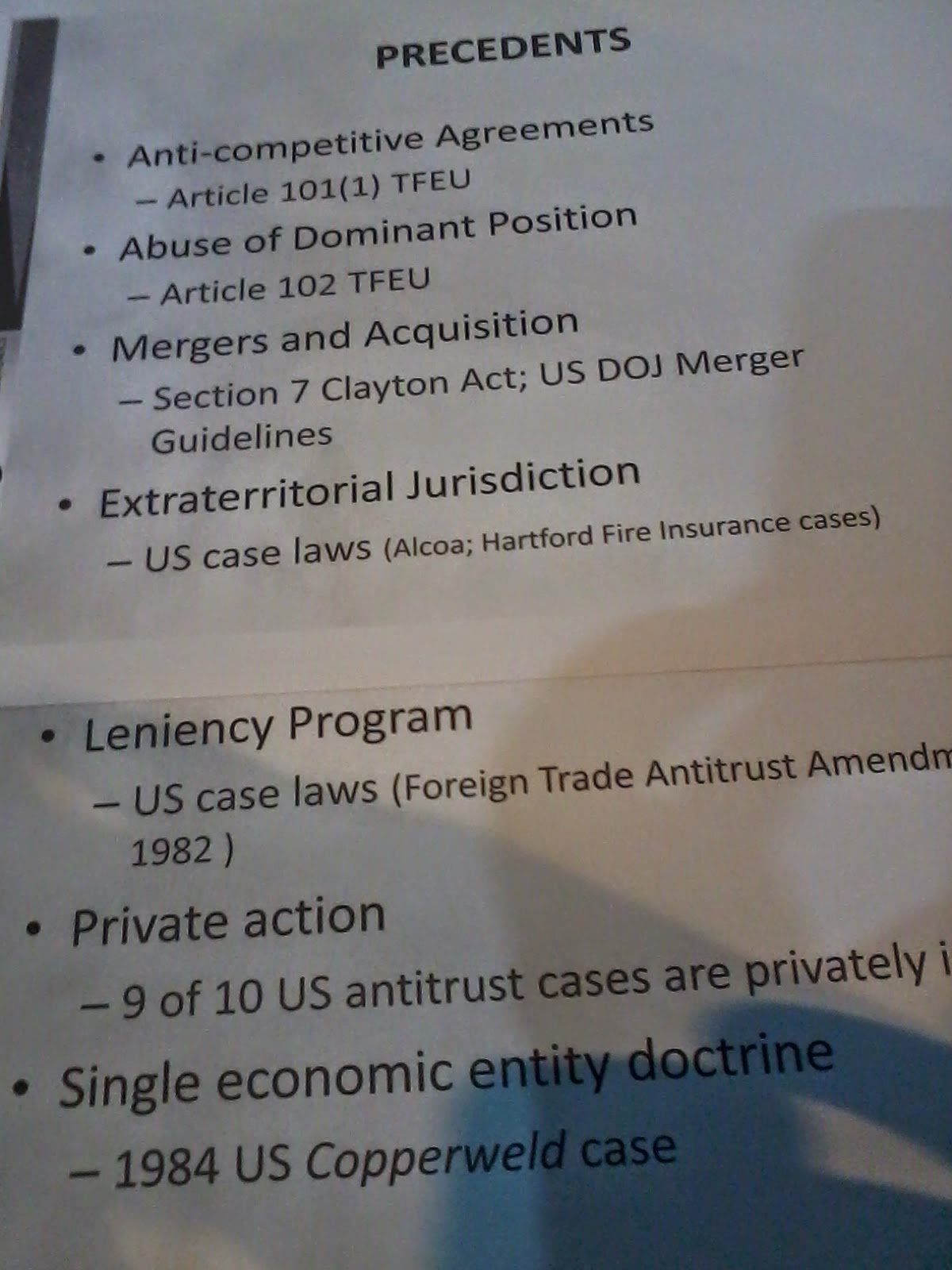 Here are some of the slides discussed by Joy yesterday. I will just show them while discussing other points made by the other discussants.

She went back to history (US, Europe, etc.) in analyzing the philosophy of competition legislation. 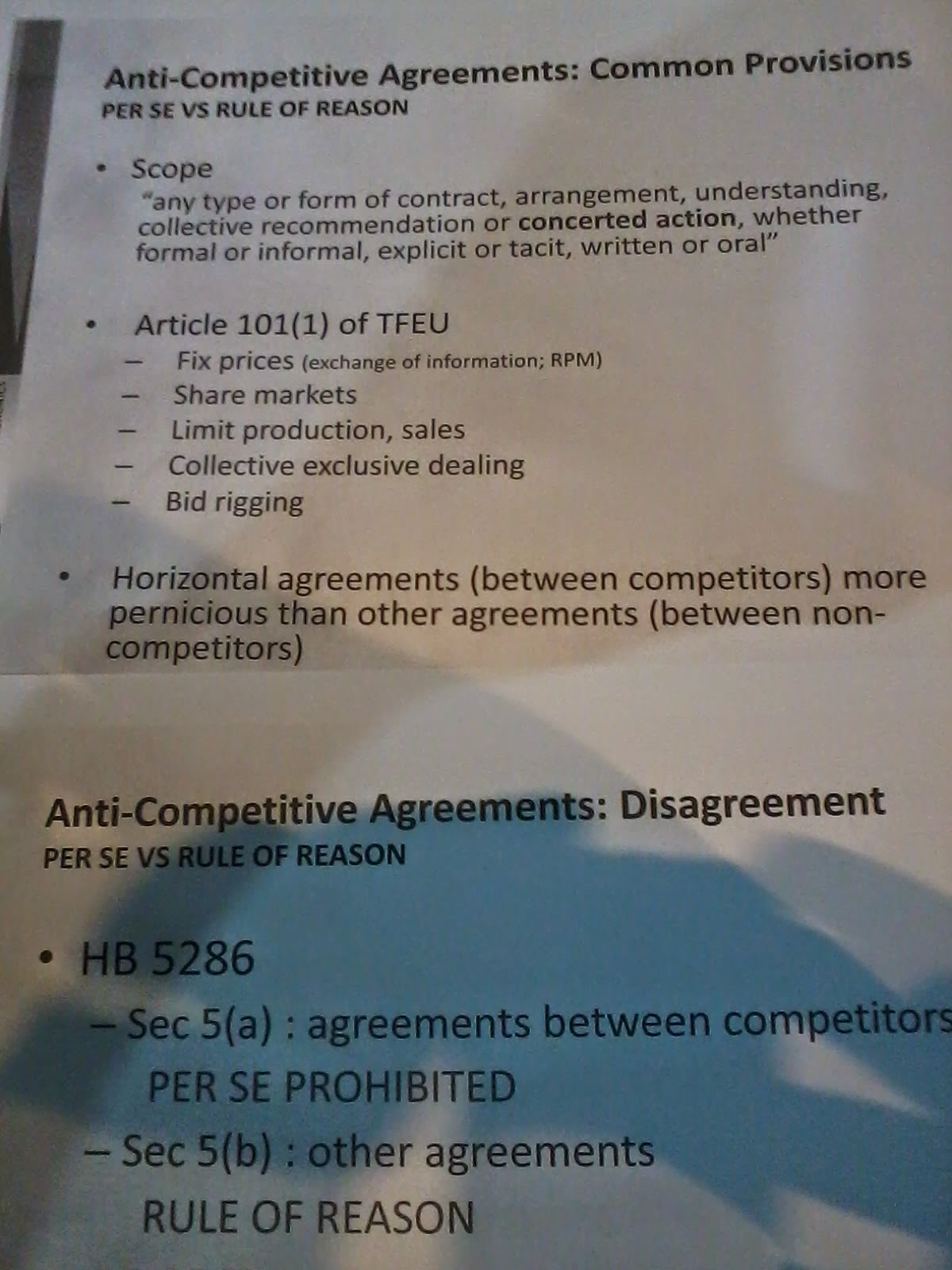 Tony Abad, one of the three discussants and an expert on competition law of other countries and the congressional bills in  the  PH, emphasized that we need a competition law. Not only for the existing companies, local and foreign, but also because having that law is a requirement for the PH government if it wants to join some existing and emerging trade alliances like the US-led Trans Pacific Partnership (TPP).

I can understand that those economic alliances would require such a law before applicant governments of other countries can be accepted because  they want to see how their companies will be treated here in case they get into legal troubles on "anti-competition" charges someday. 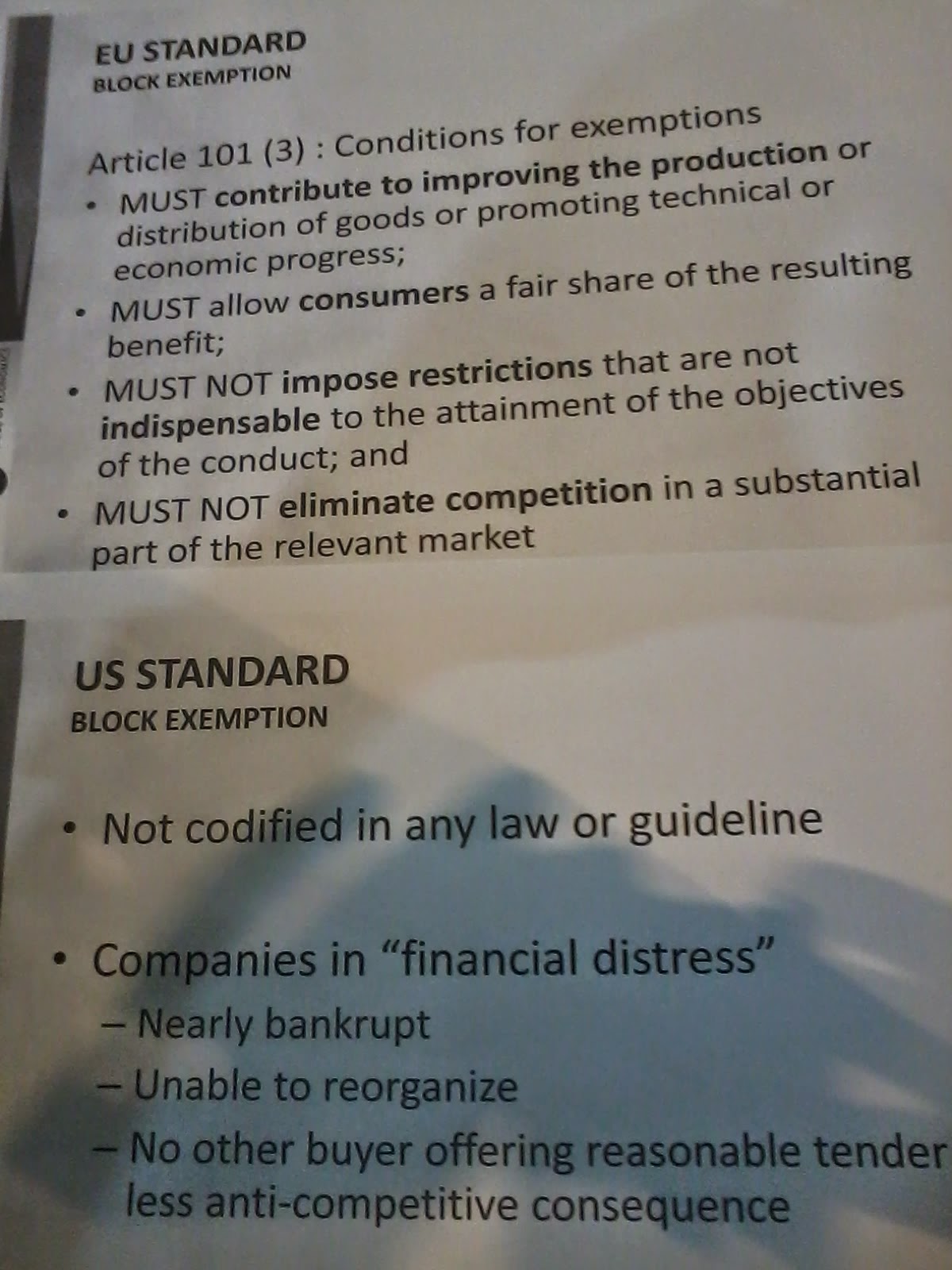 That's a good point. And I will add that ALL monopolies and oligopolies are created by the government via various agencies, local and national. 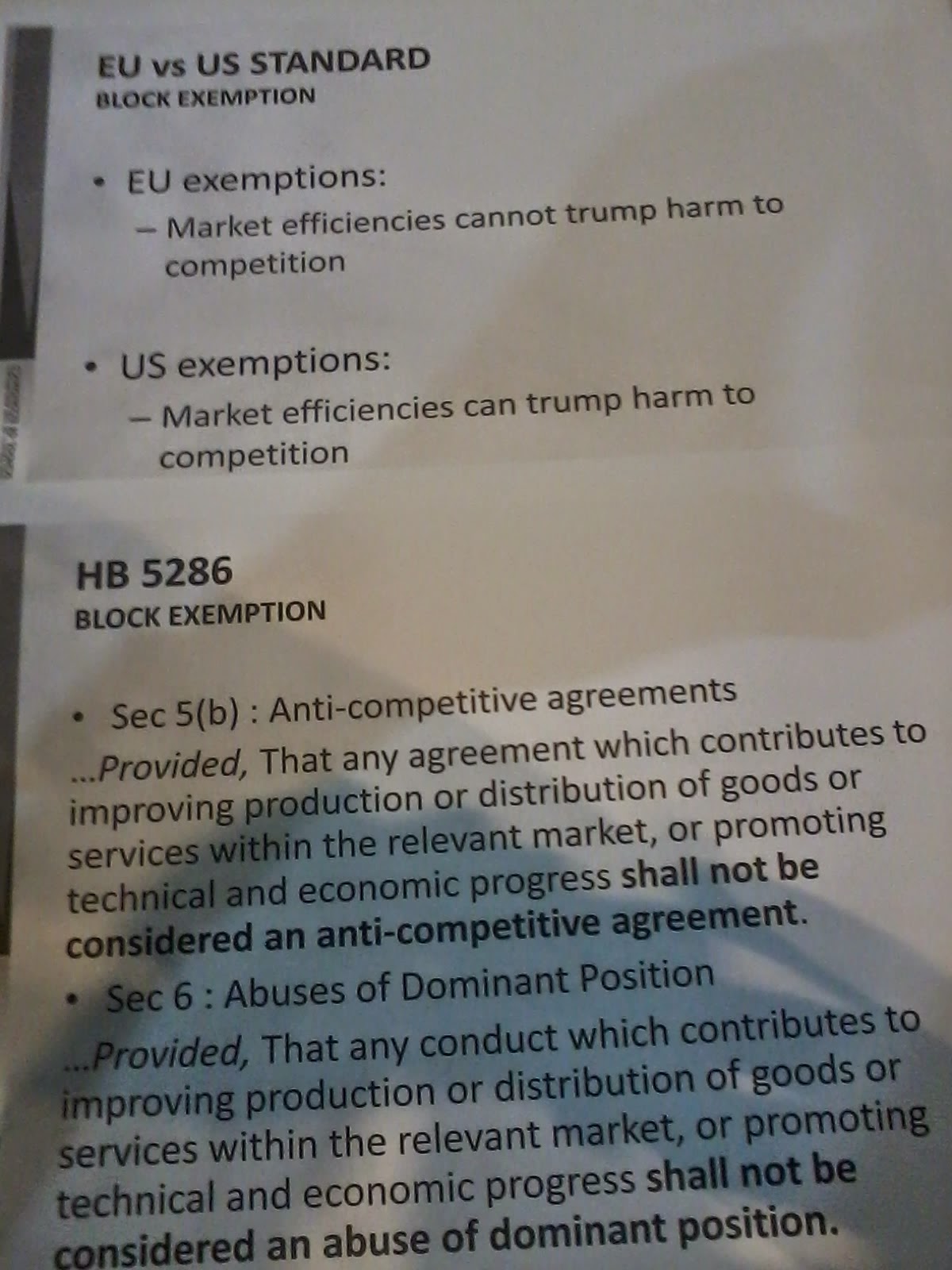 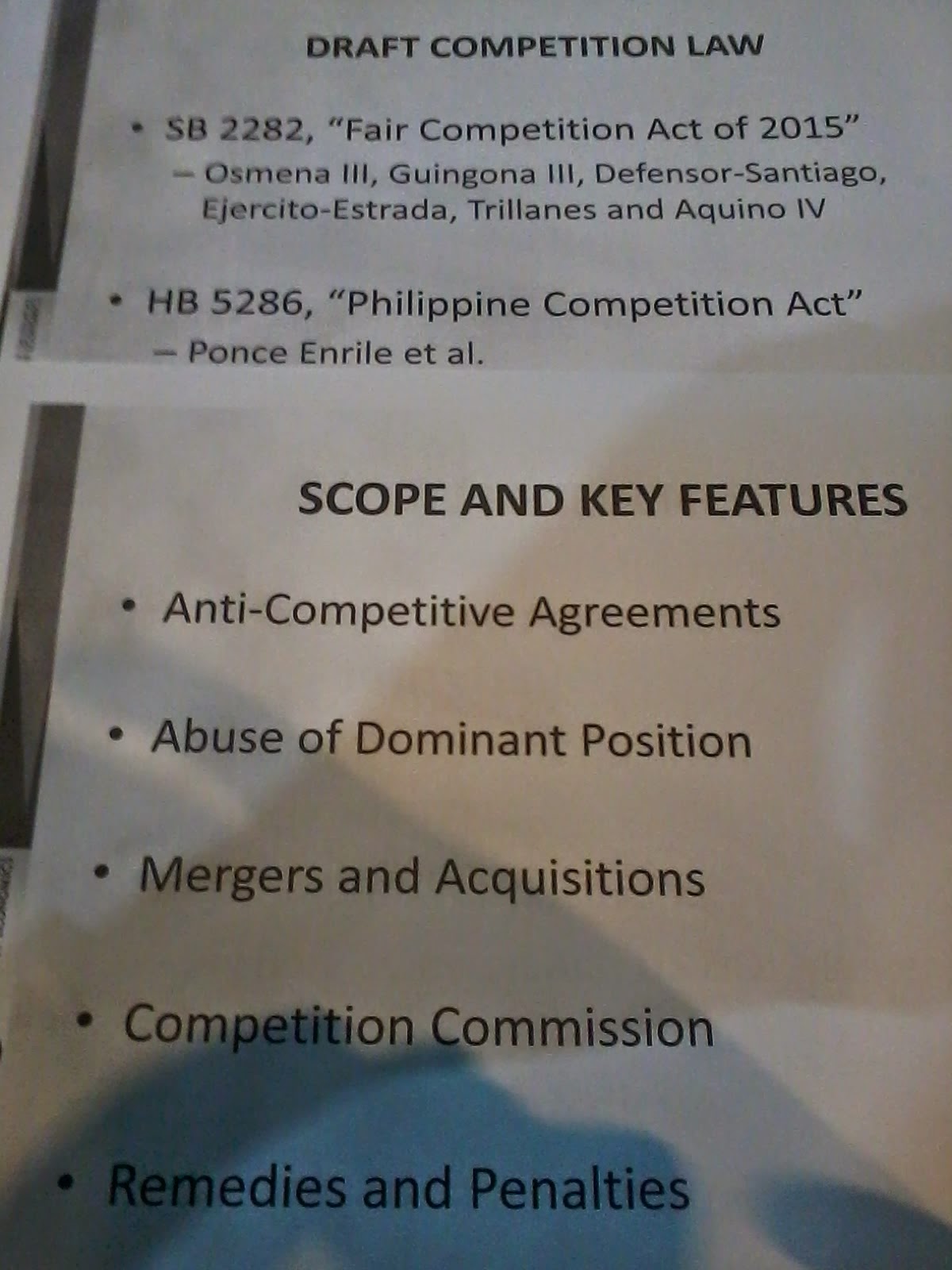 See, government is the creator of monopolies and oligopolies. So it is ironic that government is creating a new law supposedly to regulate anti-competition, monopolistic and oligopolistic practices. But then again, government is expected to produce this legislation, so we should have a new law on this soon as this has been filed in previous Congresses some two decades ago.

Personally, I would wish to see a competition law where a new  office or bureaucracy, the Competition Commission or Fair Trade Commission, will have power to clamp on other government agencies (LGUs, LTFRB, CAB, MARINA, PAGCOR, NFA, PPA, etc.) that disallow fair competition because they themselves are the monopolists, or choose special corporate interests as the government-blessed monopolists and duopolists.

But those agencies will fight tooth and nail, horns and claws, to prevent that bill to become a law. And so we will have no competition law this year or the next 10 years or more. And the PH government will be embarrassed in the international community why it has no competition law until this decade or  next decade.

And that means we will have to accept this new law, imperfect of course, even "ugly" for some sectors. We can settle with that as a compromise, then work for its amendment in  the coming years and decades.
------------