International Labor Day tomorow, various labor issues will be highlighted once again. In this chart from a Bloomberg article, China Is Set to Lose Manufacturing Crown, April 29, 2015, the cost of
labor in Beijing, Shanghai, Guangzhu are twice than those in Cebu and Hanaoi; and 3-4x than those in Yangon and Pnom Penh. 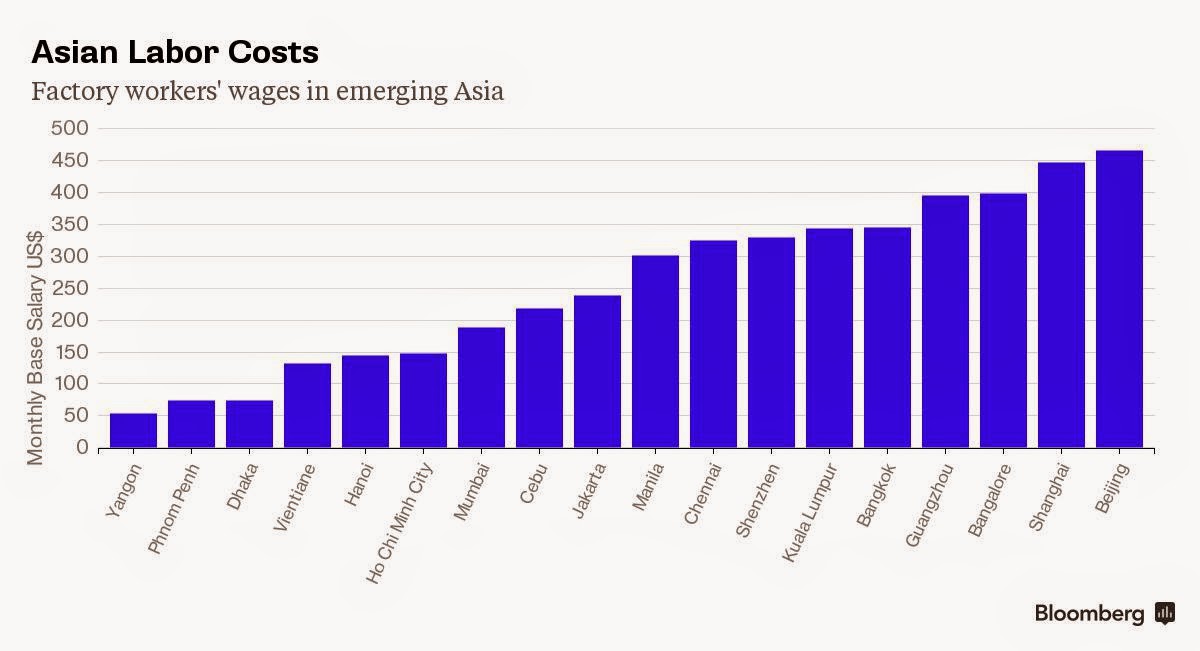 The article noted that  "Manufacturers will be drawn to Southeast Asia's strengths, including the strategic location and cheap labor of Myanmar, Cambodia and Laos... By 2030, more than half of 650 million people in Southeast Asia will be under the age of 30, part of an emerging middle class with high rates of consumption...." 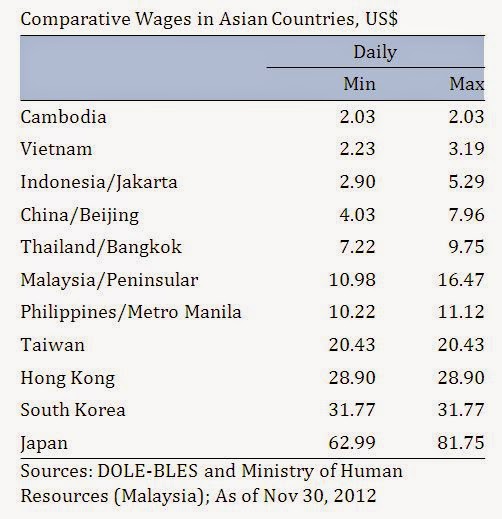 Another set of data, 2 1/2 years ago, from Arangkada Philippines.

I think these numbers represent only the monetary pay. The various mandatory social contributions like SSS + PhilHealth + PagIBIG to PH government corporations, plus HMOs, plus mandatory leaves with pay like paid holidays, are not included yet.

One problem with ever-rising mandatory and legislated minimum wage is that entrepreneurs have the option of hiring as few workers as possible, while giving high pay and  various perks to  those they have hired, to keep their productivity high, people who can do various tasks.

Another option is to use more machines and robots. Here are two news reports, the first from FT, February 10, 2015, and the second is from The Telegraph UK, February 03, 2015.

(1) FT: "Robots will replace a growing number of jobs in industries including automotive and electronics in the next few years, particularly in east Asia, according to new research.

The prices of industrial robots have been falling steadily, dropping about 14 per cent in the past four years to $133,000 for a typical system, while capabilities have been expanding.

Some robots are even cheaper: the Baxter robot from Rethink Robotics has a listed base price of $25,000, making it accessible to smaller companies that might have found it difficult to invest in earlier generations."

"In a paradigm-shifting development, the hotel in question, the Henn-na Hotel, will be partially staffed by what are termed “actroid" androids – remarkably human-like robots who will be able to greet, carry luggage to rooms, make cups of coffee – and even smile....

Three of the uniformed actroids will serve as reception staff at the Henn-na Hotel, scheduled to open in July. Alongside them will be four service and porter robots, an industrial robot serving as a cloak room attendant and several robots whose primary task will be to clean."

Related to Mary Jane Veloso's case in  Indonesia, some people blast the PH government's "labor export policy". There is such a policy? I am not aware of that policy.  If so, what law or RA, or Executive Order (EO) or Administrative Order (AO) is it?

And if people decide to  work abroad, it is important to  obey the rules and regulations of the new destination country. We may disagree with their laws, religious and cultural  practices, but we are guests there, we have to respect and obey their rules. Otherwise we should not entertain  the  idea of setting foot there in  the  first place.

Then some people blast that "employment contract" because it perpetuates inequality in society between the workers and businessmen, employees and employers. Well if people do not want to become employees -- whether by Filipino or foreign employers -- they should employ themselves, become start up entrepreneurs and job creators. It need not be a big or medium size company, it can be a micro project like food stall, or an internet shop, or become free lance writer and consultant, etc.
-----------