It is common for many if not all left-leaning groups and NGOs to be pessimist and negative-looking at almost any social and economic indicators of any country or the world in general. This is because global trade and investments, mobility of goods, services/people, capital and technology, are under a market system of exchange, or what socialists and left-leaning groups call as "global capitalism". 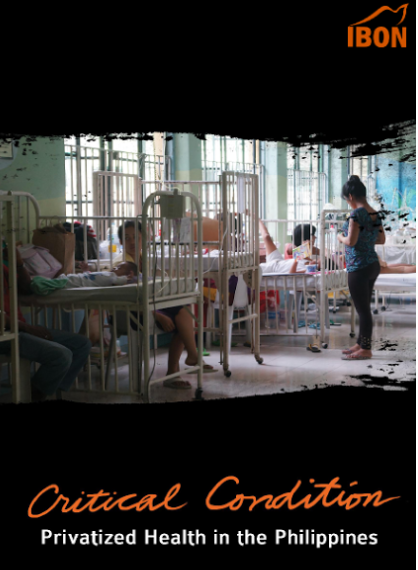 Last Tuesday, April 07, I attended a health forum plus book launching of IBON, a known leftist think tank. Before the launching, there was a talk on "Health Privatization in the Philippines and Health Campaigns" by Rosalinda Tablang, Deputy Exec. Director of the Council for Health and Development, Inc. (CHD).

Her presentations were about the "worsening healthcare and health conditions" of Filipinos because of "state abandonment" of certain health services and giving more role to the private sector. 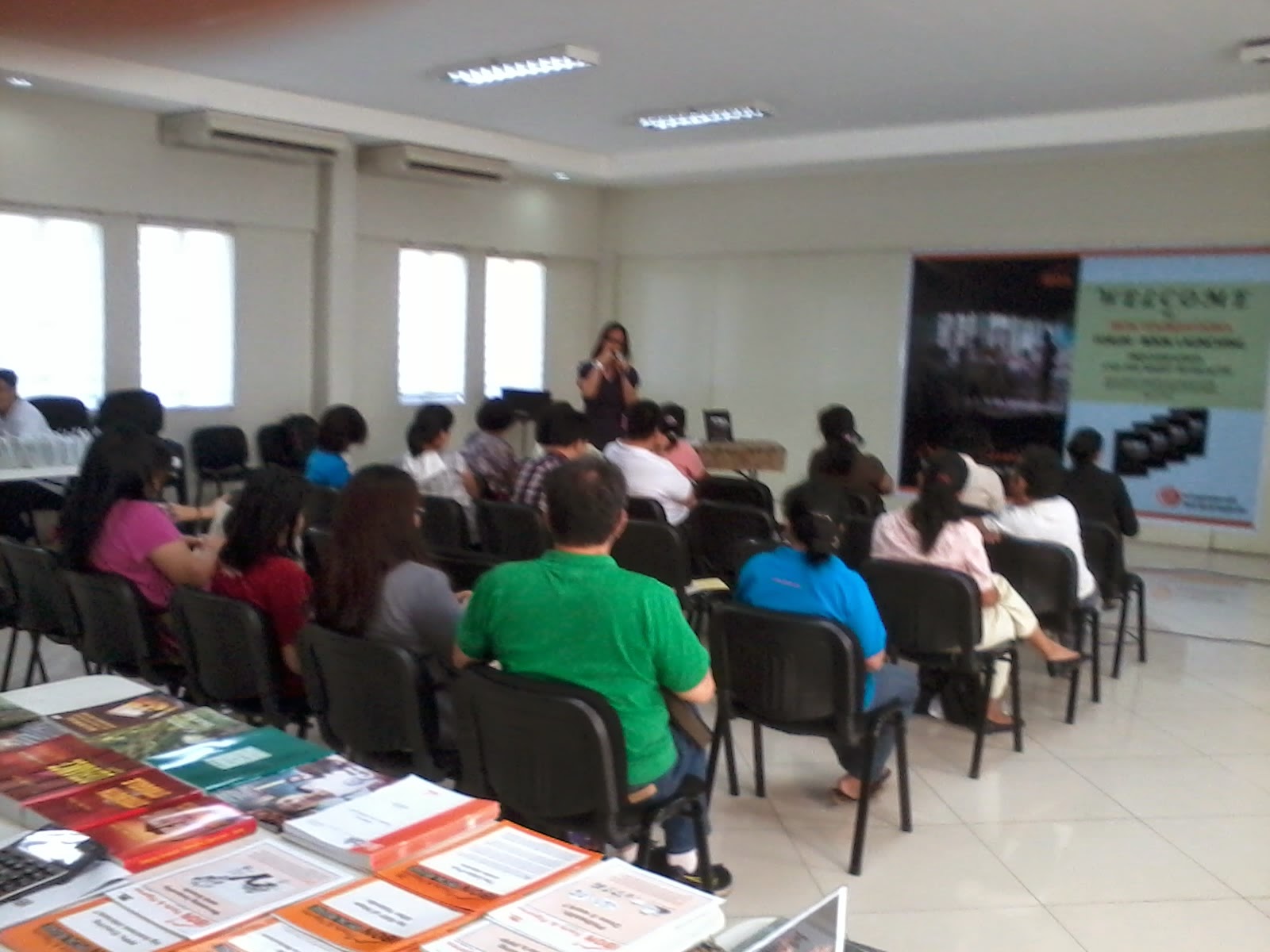 Among the number she showed were the list of government hospitals (DOH or by provincial governments) slated for public-private-partnership (PPP) modernization and corporatization. 26 such hospitals as of 2011. 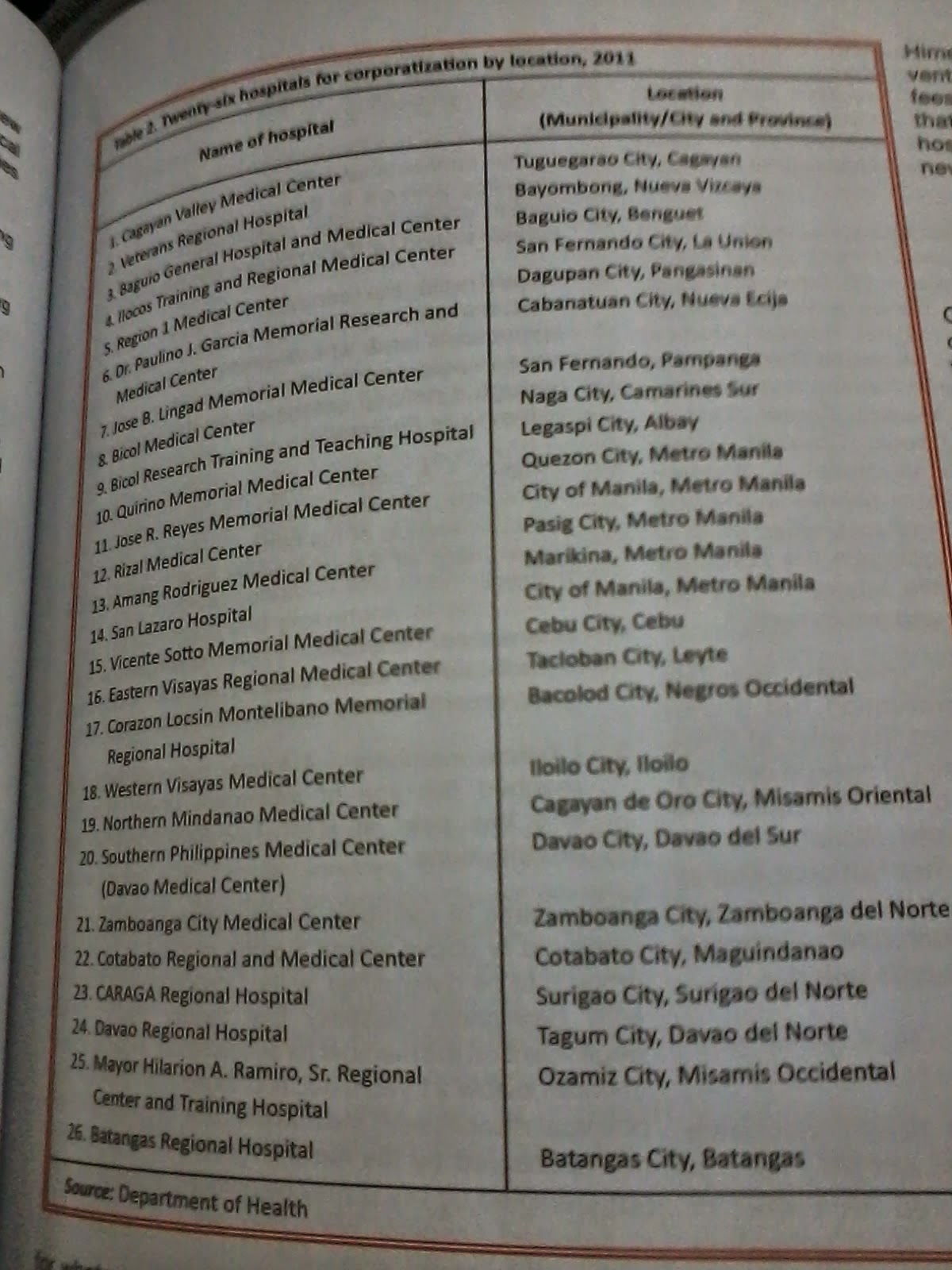 The five hospitals under PPP of the Aquino government, as of November 2014.
Among her concluding points were: (1) Allocate 5% of GDP or P527 billion for health, (2) Resist imperialist impositions, and (3) Free comprehensive healthcare for all. 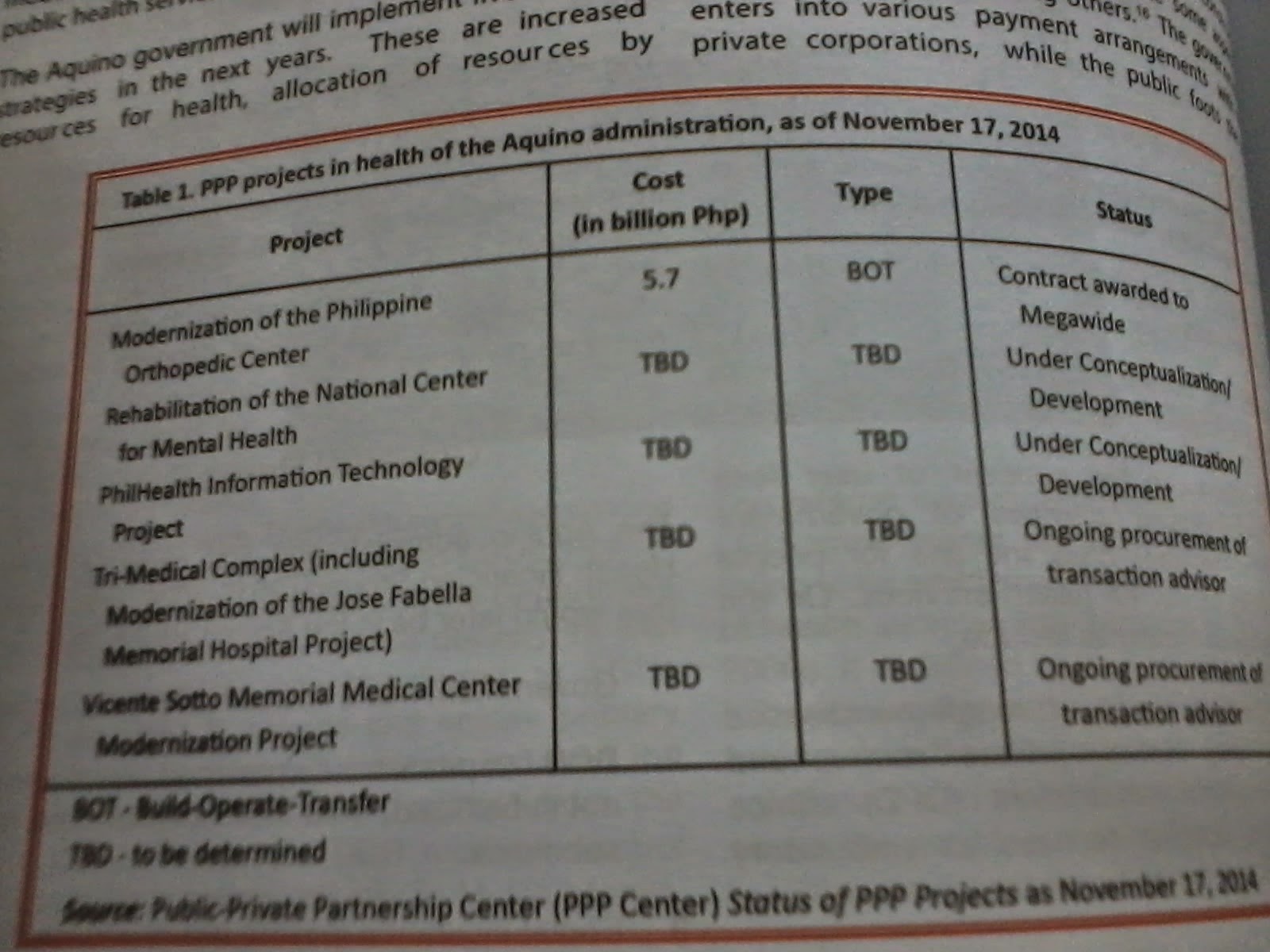 Open forum came, I raised my hand and pointed the following points.

1. While there are pockets of worsening healthcare in the PH, overall, public health  is improving as captured by the rising life expectancy of Filipinos, 69 years (67 for males, 71 for females) as of 2010 or 2012. This means that there are fewer mortality and deaths per age group today than in the past. 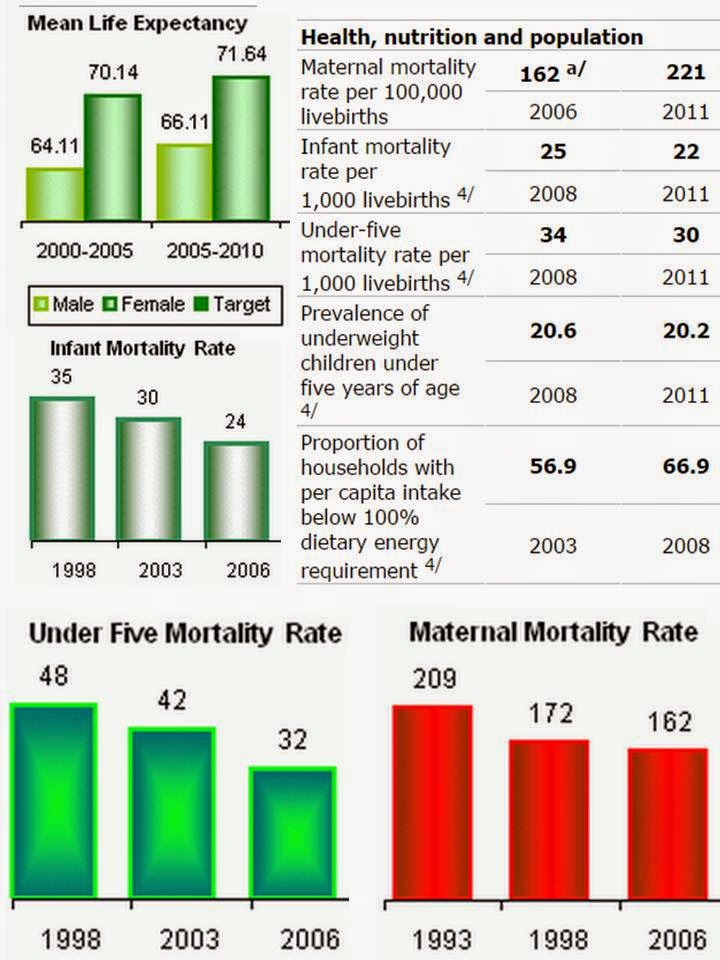 This is the trend globally, not just in the PH. 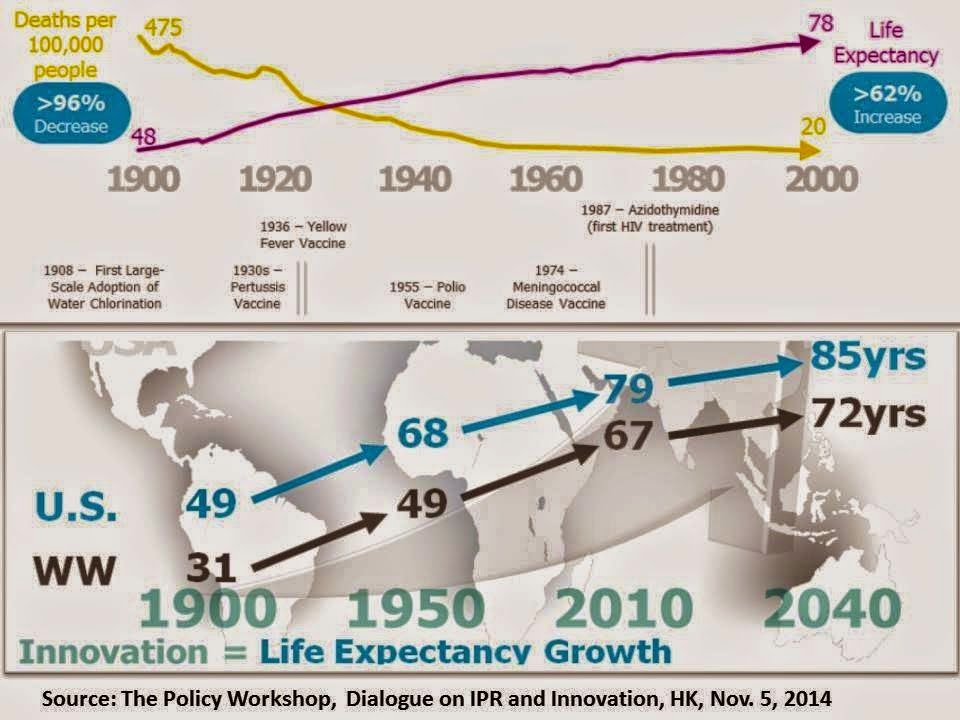 2. Total healthcare spending  in  the Philippines is around 5% of GDP already, if not higher. I discussed it here, PH Health/GDP Ratio 2011. Below are some recent data from the National Statistical Coordination Board (NSCB). 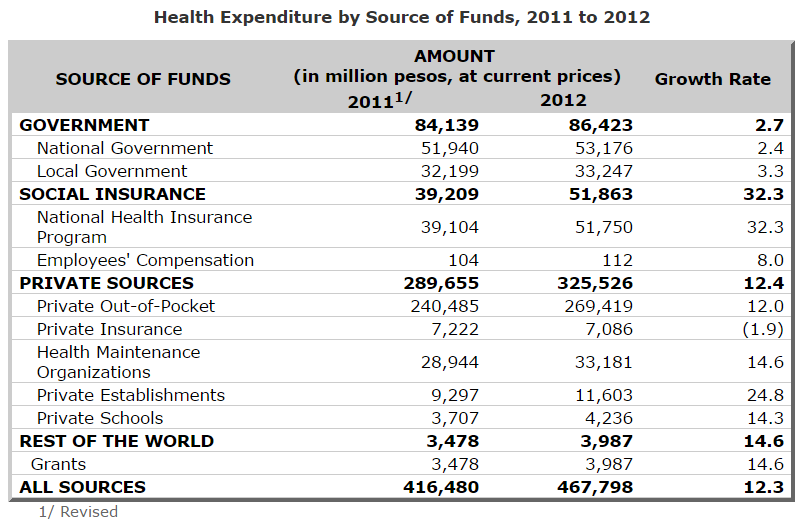 3. It is not true that PH health sector is dominated by the multinationals. All private hospitals, all drugstores and pharmacies, big and small, they are Filipino-owned. In pharma, the biggest pharma company here is Filipino, Unilab, it controls about 25 percent of the total domestic pharma market, much bigger than  the  combined sales of #s 2, 3 and 4 (Pfizer, GSK, I don't remember the other one) of around 22-23%.

4. Corporatization is not the same as privatization. When the PH Orthopedic Center (POC) is modernized and developed by Megawide and its other private partners, the DOH Secretary will still  be the head or Chairman of the Board and government people will most likely be the majority in the  board. The difference is that under the DOH-controlled POC, all board members are from the government while under a corporatized POC, there are representatives from the private sector who  developed the new POC.

Ms. Tablang responded to each point and argued that (a) healthcare is worsening in many areas, (b) out of pocket spending by the people remains high because of low public health spending, (c) Xrays, CT scan, other  laboratories in hospitals and clinics are imported and produced by multinationals, and (d) corporatization is just another term for privatization.

I went there not so much to convince the left-leaning people there who  are already so convinced of their position, but to present a counter viewpoint even briefly, so I did  not make additional rebuttals.

During the book launch and awarding of copy to a community organizer in Payatas, QC. From left: Rosalinda Tablang of CHD, Rosario Bella Guzman, IBON Exec. Editor, Glenis Balangue, IBON Senior Researcher, and the guy from Payatas. He's an articulate speaker. 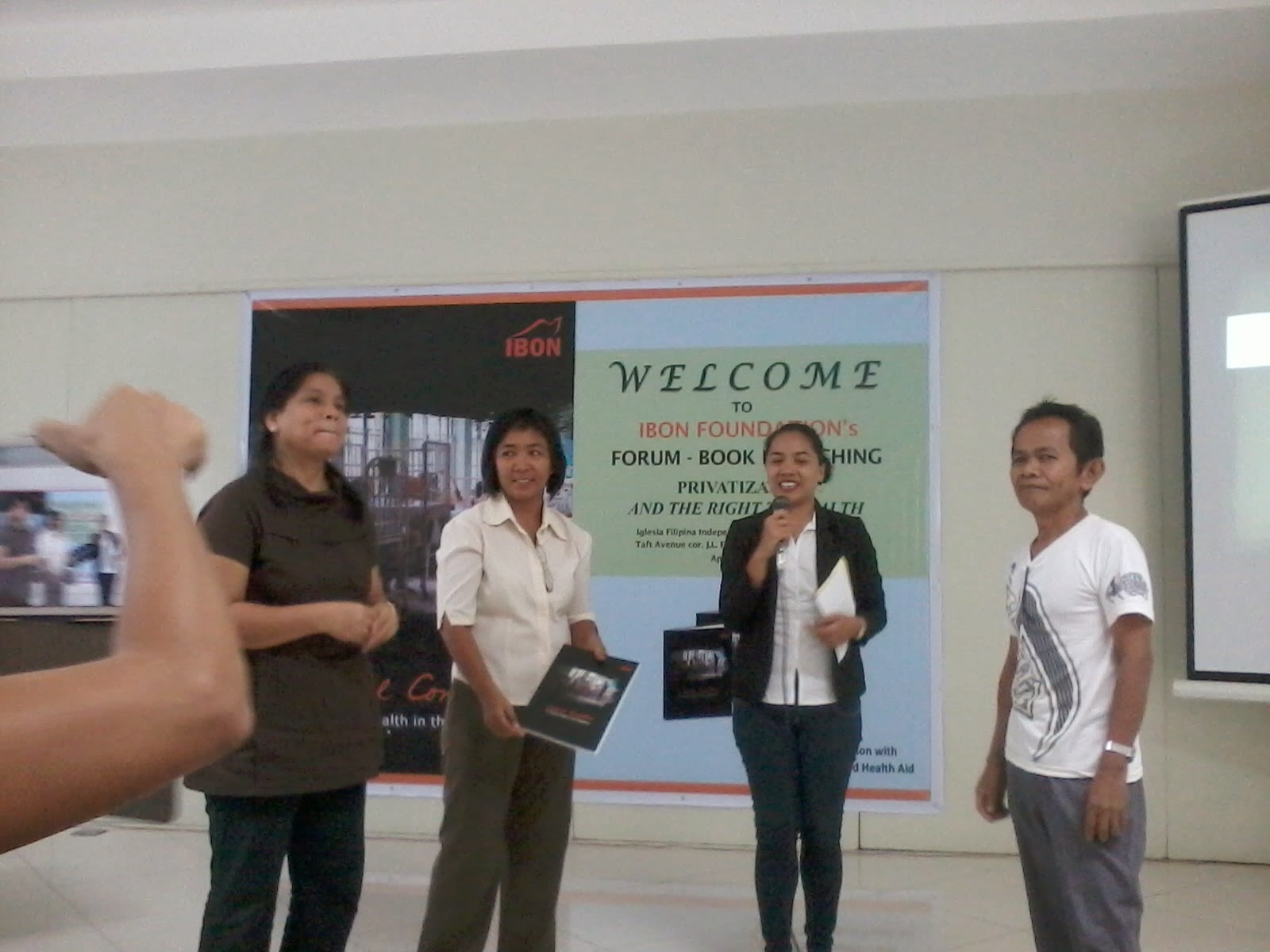 I did not buy the book (P300), first because I did not have money that day, and second, I think there are several  important health data that it purposely omitted. Like the charts and table I showed above. Anyway, IBON people know that we are 180 degrees opposed on various issues but the disagreement is on the level of philosophy and issues, not personal. So after enjoying the sumptuous merienda, I left.

Hey wait, among  the books sold by IBON that day -- four books of Jose Maria Sison, the founder of the Communist Party of the PH (CPP) and exiled commie leader in the Netherlands, enjoying the good life there for 3+ decades now while fanning hatred and even violence in the PH. 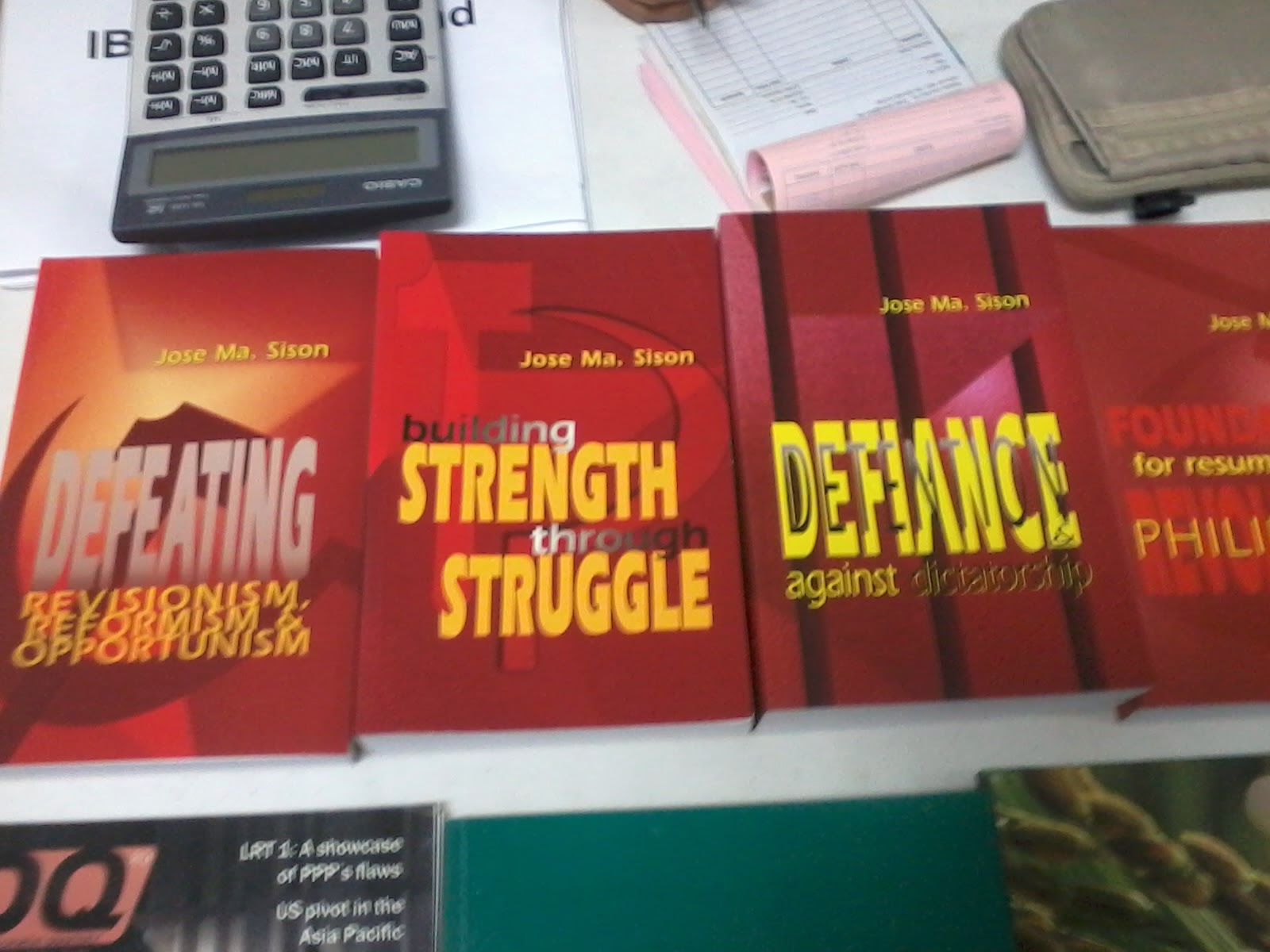