BWorld 1, PH Economy and Politics, Is there a Disconnection? 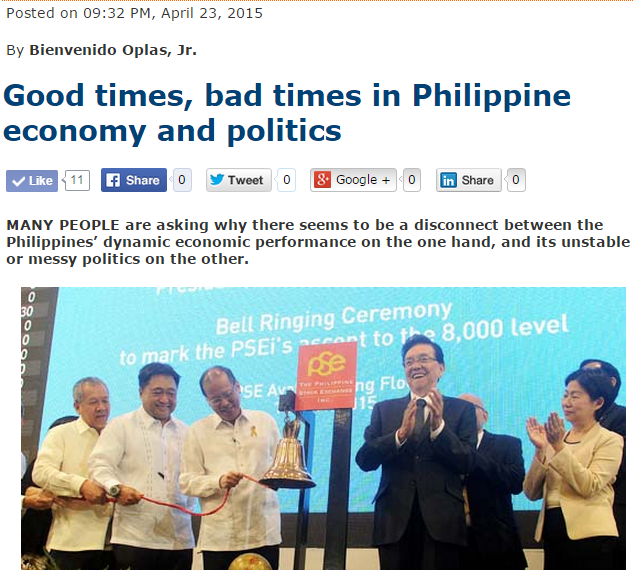 
Many people are asking why there seems to be a disconnect between the Philippines’ dynamic economic performance on the one hand, and its unstable or messy politics on the other.

In the words of a friend, Prof. Amado Mendoza, Jr. of the University of the Philippines Political Science Department, who recently explored this theme in an article in Interaksyon: “There seems to be a firewall between the Philippine economy and the political sphere such that the economy can still grow (GNP- and GDP-wise) even if the political situation is messy.” (See Interaksyon OPINION | How did PHL economy grow despite messy political situation?)

There are two ways to tackle this question. One is to assume or accept that the statement is correct, that there is indeed a “disconnect” or “firewall” between the country’s economics and politics. The other way to tackle this question is to prove otherwise, that there is no disconnect between the two, that they are actually interlinked. Let us call them the “disconnect” and “connection” hypotheses.

Among the proof given by the “disconnect” hypothesis are the following: (a) the Philippine stock market rising above 8,100, which is double the 4,000 in September 2010; (b) continued upgrades of the Philippines by the various international ratings agencies to stable grades and high growth projections, and of course, (c) high gross domestic product (GDP) growth performance, the highest in ASEAN and second highest after China in the whole of Asia if not around the world. Here is a list of positive developments in the Philippines as contained in a presentation by Foreign Affairs Assistant Secretary Luis T. Cruz at the Networking Forum on Post-2015 Integration on April 8, 2015. And yet, on the political front, proof of the “disconnect” are as follows: (a) declining public satisfaction with the President’s performance -- from a net satisfaction of 39% in December 2014 to only 11% in March 2015 -- as per the Social Weather Stations; (b) calls for the President’s resignation from various sectors after the Mamasapano incident; (c) dissatisfaction with government inefficiencies, such as the Bureau of Internal Revenue’s (BIR) anti-business rules, and the Land Transportation Office’s (LTO) “no plate no travel” policy despite its failure to provide the plates.

The “connection” hypothesis recognizes all the above proof but it offers a different interpretation: people want economic optimism to be extended to political optimism. They want the bullish economy to have continuum in the government and political field. With a good, if not high economic performance, people expect good performance by the political leadership through more transparency and less red tape.

More people want to put up businesses, and yet government agencies -- local and national -- put up many requirements, permits, taxes and mandatory contributions. More people buy new cars and motorcycles, but the LTO imposes a “no plate, no travel” policy with hefty fines even if it has a backlog in the issuance of license plates and stickers. More people buy smartphones and laptops, yet internet speed is slow and expensive compared to many of our East Asian neighbors.

The International Monetary Fund (IMF) released its World Economic Outlook (WEO) 2015 Report last April 14. WEO’s online database is a useful source of information for various annual macroeconomic indicators dating back to 1980. Here are some data that can help contribute to the above discussion. Purchasing Power Parity (PPP) is used in national accounting to remove high valuation in mostly rich countries of similar goods and services as those in other countries. Thus, GDP valuation is more or less equivalent.

One, the Philippines’ economic expansion over the last two decades of 3.7 times was modest, compared with Indonesia, Malaysia and Singapore, but higher than those of Thailand and Brunei.

Two, socialist or monarchy governments of Cambodia, Laos, Myanmar and Vietnam (CLMV), which began to liberalize their economies only about a decade or two ago, experienced fast expansion. Their low economic base in the 1990s partly explains this.

Three, there is need to accelerate economic liberalization of the Philippines in trade (goods and services) and investments, allow foreign businessmen to invest with majority stakes in heavily protected if not pariah sectors like telecom, power generation and distribution, airlines and shipping, hospitals and healthcare, etc. The quick economic expansion of CLMV countries is a guide for the Philippines.

So, is this a case of “disconnect” or “connection” between Philippine economics and politics? It appears to be the latter. The people want their economic freedom to expand in the sphere of politics and government. Ramblings in the political sphere are expressions of this desire for more personal and enterprise freedom. The people want the government to give them more leeway, to have less bureaucracy, so they can reach out to more sectors and sub-sectors of the economy, and create more jobs.

A graduate of development economics from the University of the Philippines School of Economics, Bienvenido “Nonoy” Oplas is president of Minimal Government Thinkers, a Philippine-based think tank that propagates free market economics.
---------