On Tuesday, I will attend this event organized by IBON, a left-leaning, anti-globalization, anti-market or competitive capitalism think tank in Manila. Their book title says it clearly -- that privatized healthcare (HC) in the country is in critical condition. Critical condition? I don't think so. Besides, I think they refer to corporatization, not privatization, of some government/DOH  hospitals. I will come to debate some of their  points, in a civilized way, of course. 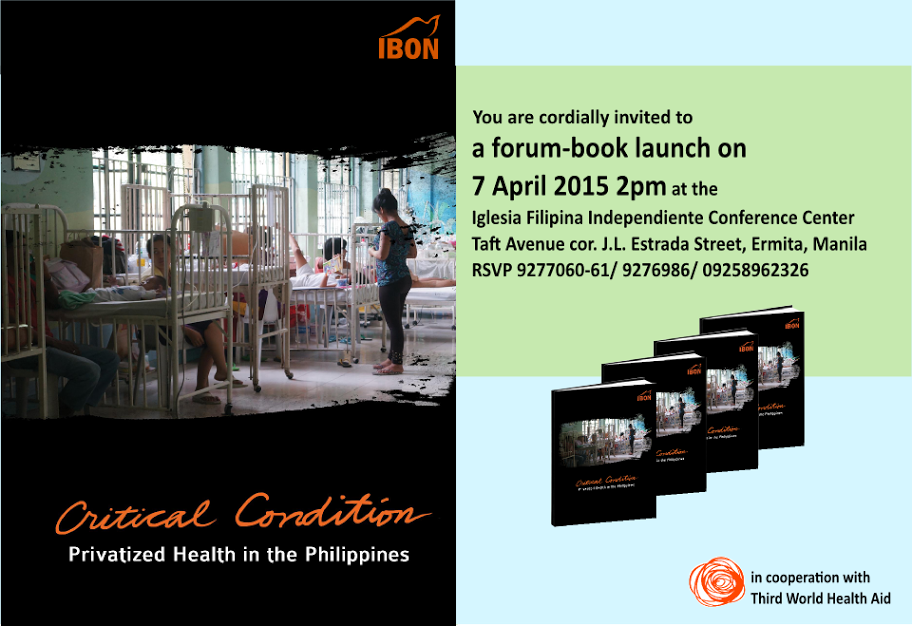 Those government hospitals like the Orthopedic Hospital will NOT be privatized, as in the DOH totally getting out of the operation and management of those hospitals. Rather, they will only be corporatized, similar to other government owned and controlled corporations (GOCCs) and government financial institutions (GFIs). There will be a board of directors composed of officials from the DOH, PhilHealth, private investors, etc. Thus, these government hospitals  will be run and managed more professionally, the hospital administrators will be answerable to the Board and not just to the DOH Secretary + Congressmen + Senators.

There was a petition at change.org. Only 38 supporters. It's good that the public were not carried by the emotionalism of the campaign. 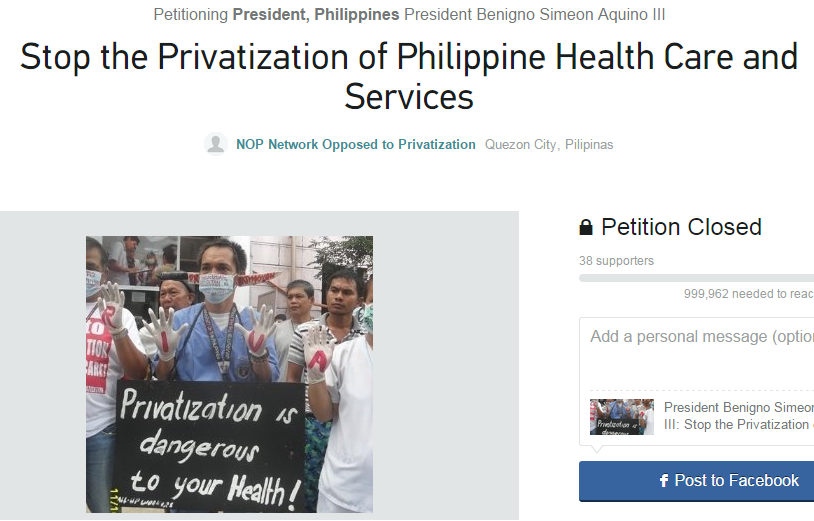 A friend, former UP President Francisco "Dodong" Nemenzo, when  he  was  confined at the Philippine General Hospital (PGH) for about 1 1/2 months, he and his family stayed in a paying, private room at the 7th floor. The room is big, spacious and nice, can accommodate a number of visitors, and many visitors did visit Dodong, me included.

an example of semi-privatized healthcare. Semi-private because PGH  is still a public hospital (its annual funding is taken from the UP budget, not DOH budget) yet patients in this case pay the cost of private rooms and amenities. And it is a lot better than a purely public set up like the rest of PGH rooms and wards.

Patients whose family or friends have the means to pay for better amenities should pay the full cost of the ameneties, so that PGH's and  other public hospital's additional resources can be allotted exclusively to the really poor patients, towards universal healthcare (UHC). The rich and middle class as much as possible, should not compete for resources and room space in public hospitals. Otherwise, queueing will become even longer and service quality will further suffer.

Dodong and his family are not rich, they are just a typical middle class family. But he and his family have many friends and relatives who have sufficient resources and are willing to donate money for the high cost of his hospitalization. Civil society at work.
---------------