Last month, I gave a talk about the new tax-tax-tax law of the Philippines called TRAIN, signed in December 2017. Audience were accountants, auditors, managers of medium to large corporations plus officials and staff of Deloitte. I said that I entitled my paper as such because I believe that the TRAIN law is a lousy and ugly law. 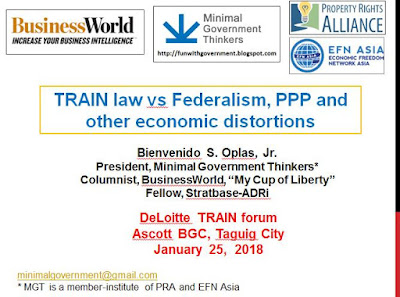 The audience (100+) smiled, others wondered. My concluding notes:


* PIT cut  rate should be a social goal and a public service in itself. Earning P500,000 (little less than $10,000) or higher per year and be slapped with 32% income tax is  confiscatory, immediately qualifies the government as creator of poverty. No need to raise or create new taxes somewhere.

* Instead of raising the top PIT rate to 35%, TRAIN should have cut it to 20% max, to (1)  be more comparable with MY, SG rates and (2) decentralization preparation, allow state govts to have their own income tax, excise tax, etc.

* Federalism can be more attractive to the people, central national government should learn to step back, tax less, regulate less, bureaucratize less, people and investors in the provinces have more leeway, more opportunities to craft their own political and economic identity.

“I hope we once again have reminded people that man is not free unless government is limited. There's a clear cause and effect here that is as neat and predictable as a law of physics: as government expands, liberty contracts.” 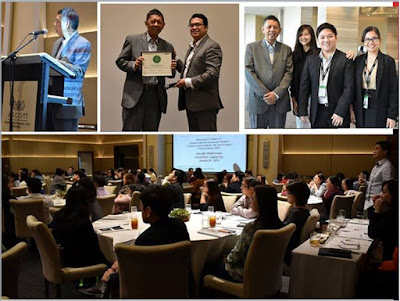